More than 50 international designers, from Martino Gamper to Playlab, have shared their take on the toilet paper dispenser as part of an exhibition at Marta gallery in Los Angeles. Here, the curators pick their ten favourite pieces from the show.

Called Under/Over, the exhibition is on show until 1 November and hopes to draw attention to the toilet roll holder as an overlooked and underappreciated household item.

“Almost anyone could design a toilet paper holder”

“Like so many Western products related to the body — goods made on behalf of bowel movements, reproductive health or sexual health – there is a ludicrous, puritanical, nearly-taboo association with speaking openly about toilet paper, let alone designing thoughtfully on its behalf,” said Heidi Korsavong, who curated the show and founded Marta alongside Benjamin Critton.

“More often than not, toilet roll holders are lumped in with other bathroom hardware to form so-called ‘bathroom suites’. Rarely are they designed autonomously or independently and, in a way, they are almost always an afterthought.”

For the Under/Over exhibition, Marta partnered with Plant Paper, a start-up producing toilet paper that is made from fast-growing, FSC-certified bamboo and which the company claims is free of harmful chemicals.

This is used as the cherry on top to decorate the menagerie of eclectic toilet roll holders that are on display as part of the show, created by an equally eclectic mix of landscape and furniture designers, artists and architects.

“The idea is that almost anyone could design a toilet paper holder because everyone is so intimate, literally speaking, with their functionality,” said Critton.

The majority of pieces in the show were newly commissioned for the occasion. And although the curators gave an explicit brief, calling on designers to create a maximum of two, 30 by 30-centimetre wall-hung pieces, the rules were liberally broken.

Meanwhile, the materials used vary greatly from piece to piece.

“Some were dictated by scant access to fabrication facilities amidst the global pandemic,” said Korsavong. “And others clearly placed their materiality in direct dialogue with the subject matter, making use of tree pulp and copper, which is often used in plumbing.”

Far from being a superficial issue, the exhibition hopes to raise the fact that our refusal to dwell on these aspects of personal hygiene actually has a real, measurable impact on the environment.

That’s because, according to the curators, it allows the large conglomerates controlling the traditional toilet paper industry to continue cutting down virgin forests, which have taken hundreds of years to grow, for a single-use product that is immediately discarded.

“Our hope is that the sheer presence of some of these pieces prompts delight or reflection in such a way that someone might question their implicit ‘collaboration’ with the companies supplying them their toilet paper,” Critton told Dezeen.

“Like so many big businesses, the traditional toilet paper industry thrives because users haven’t been given a prompt to question the composition or environmental efficacy of the products they grew up with. And in turn, big businesses in a market economy have very little incentive to alter their tree-derived, water-guzzling product offering.”

Below, Critton and Korsavong share 10 stand-out pieces from the exhibition and the stories behind them. 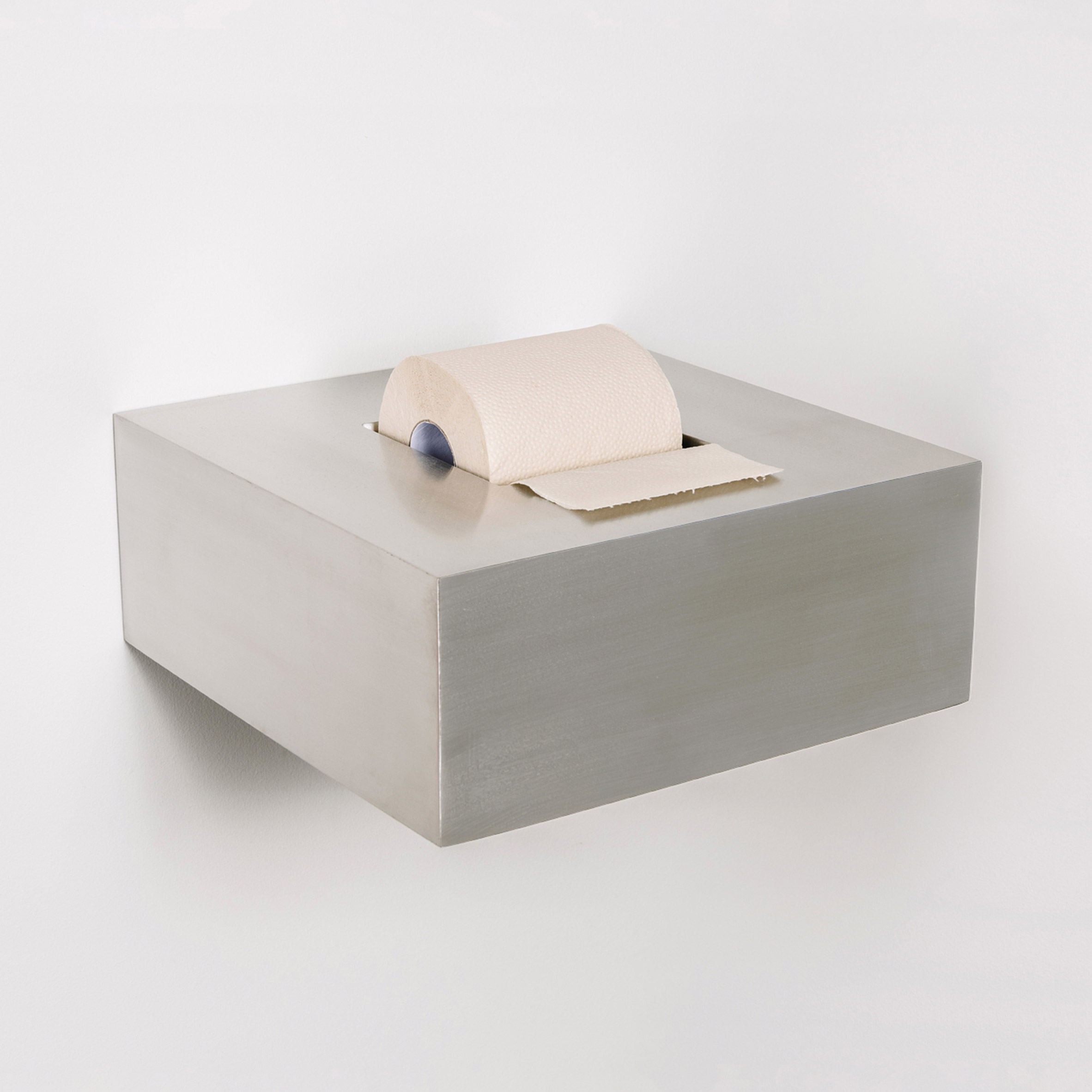 A Space Entirely Devoid of Matter by Max Enrich

Barcelona-based Max Enrich designed this stainless steel box to dispense toilet paper without the need for a spindle or other mechanism. Instead, a hollowed-out compartment allows the roll to sit snugly and yet turn freely when pulled.

“We see it as this mix of high and low because, on the one hand, stainless steel is this material that we’re familiar with from airport bathrooms and other functional spaces,” said Critton.

“But on the other, it has this beautiful, almost Donald Judd-like construction that comes off the wall and really presents itself to a viewer. It feels like its almost putting this product on a pedestal to really make you acknowledge it rather than taking it for granted.” 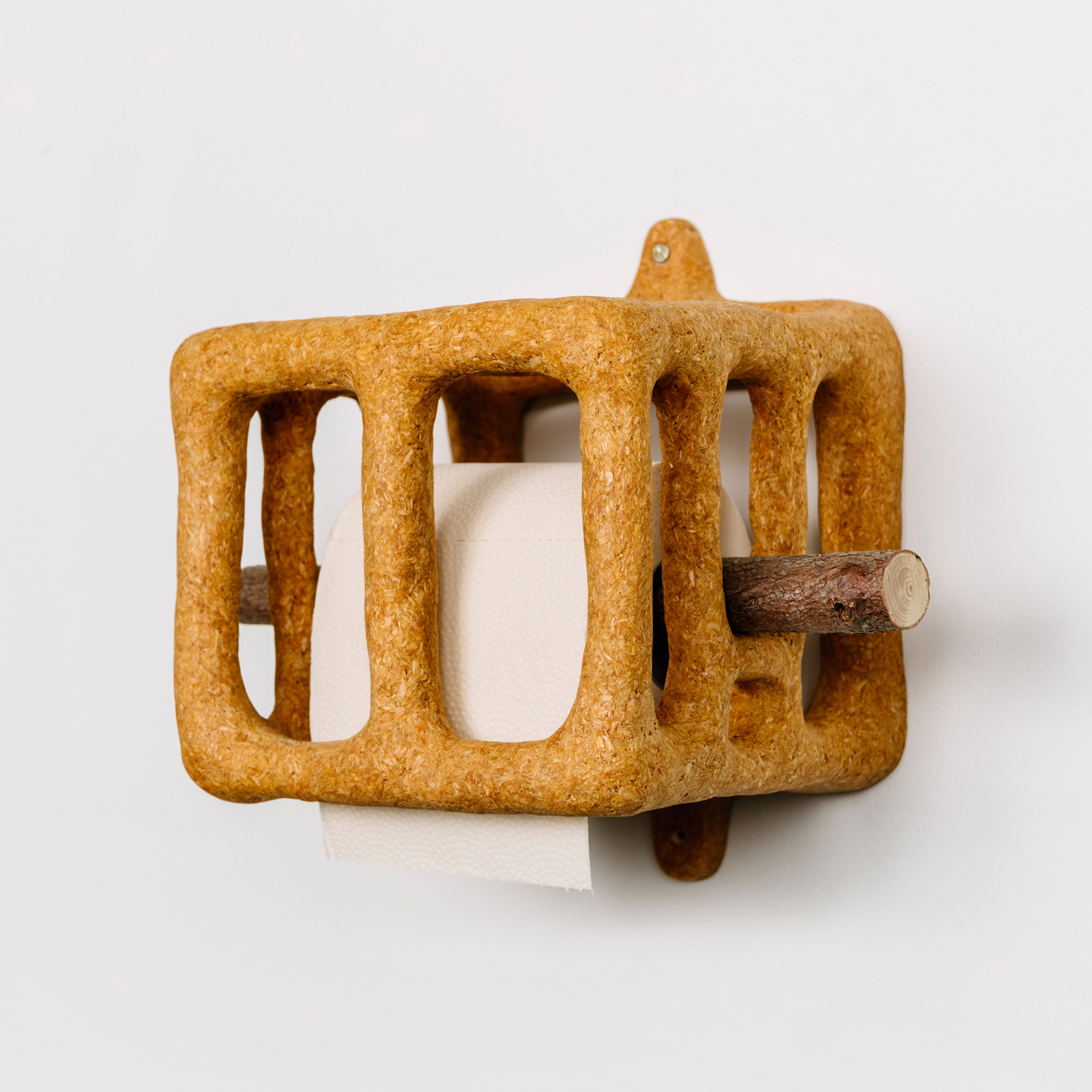 Nothing, Something by Terremoto

In this contribution by landscape architecture firm Terremoto, the toilet roll is entrapped in a wall-mounted cage made of tree pulp and skewered on a branch, both sourced from the same downed redwood tree.

“Redwoods are pillars of resilience in the forest so their absence is a poignant marker of deforestation,” said Critton.

“We flush 27,000 trees down the toilet every day in the form of traditional toilet paper, so Terremoto’s piece is an explicit comment on what goes into making this ubiquitous product that we use every day.” This holder by Romanian born designer Serban Ionescu is named after Ernest Shackleton, an arctic explorer around the turn of the twentieth century, who reportedly resorted to ripping pages from an encyclopedia when he ran out of toilet paper during his expeditions.

“Serban was quarantining in Toronto and didn’t have access to his studio. He normally works with fabricators to create these waterjet-cut pieces of aluminium, so this is a sort of joyous, analogue version of that rendered in foam and plywood,” Critton explained.

“Another thing he recorded on his materials list is a found child’s toy, which really shows the DIY approach he took to this project and offers a snapshot of this strange time.” 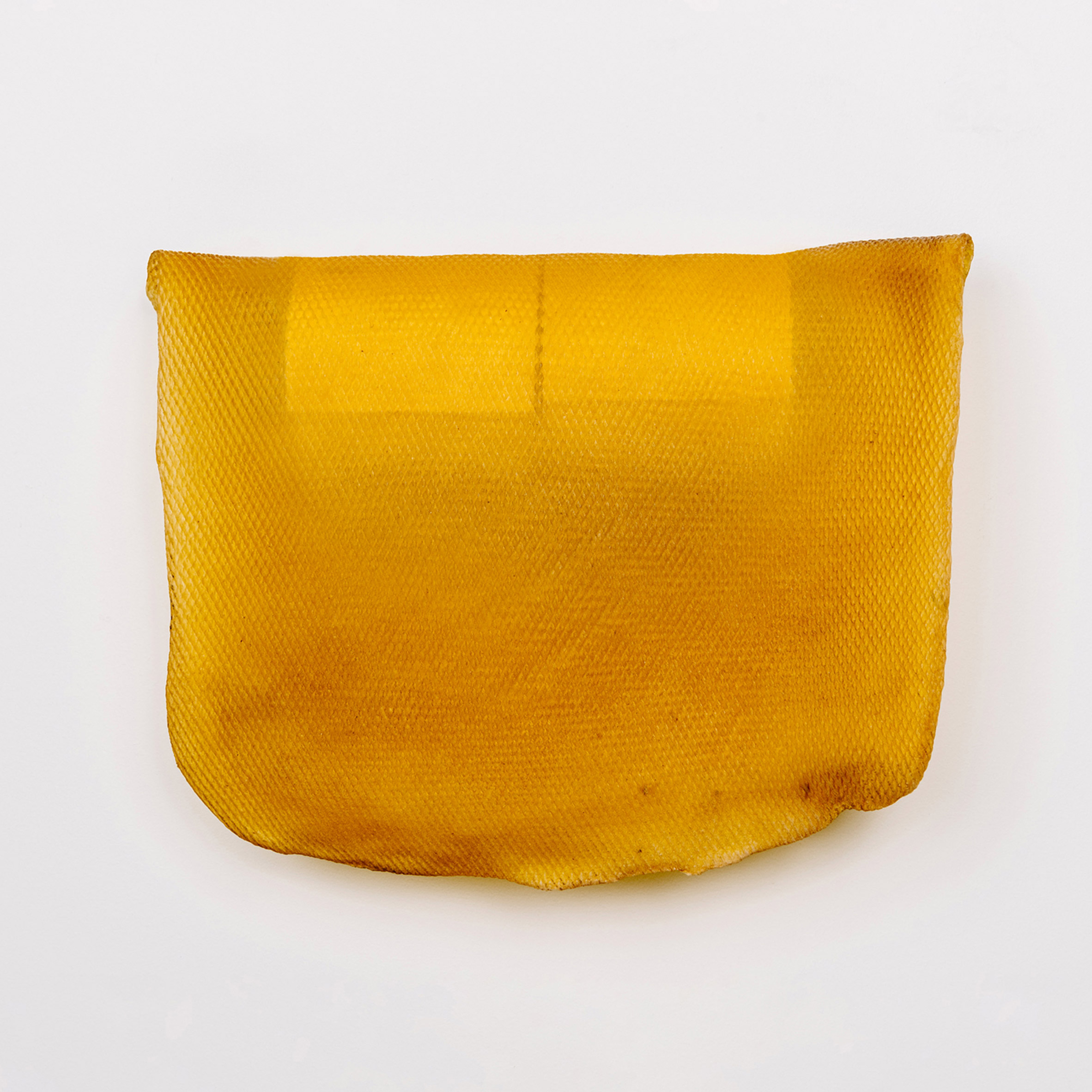 In their practice, New York design duo Kristen Wentrcek and Andrew Zebulon rely heavily on natural rubber and other disconcerting, uncannily skin-like materials. In this case, these serve to highlight the taboos around the bathroom and the bodily functions that take place within it.

“We think it’s a direct reference to a certain history in the UK where, for a time up until the 60s, people made a little curtain to go over their toilet paper dispenser because the roll was a faux pas to even show,” said Critton.

“In this version, the curtain is replaced by this waterfall of Vietnamese rubber and you get this amazingly icky sensation when you reach up under it to pull down the toilet paper.” 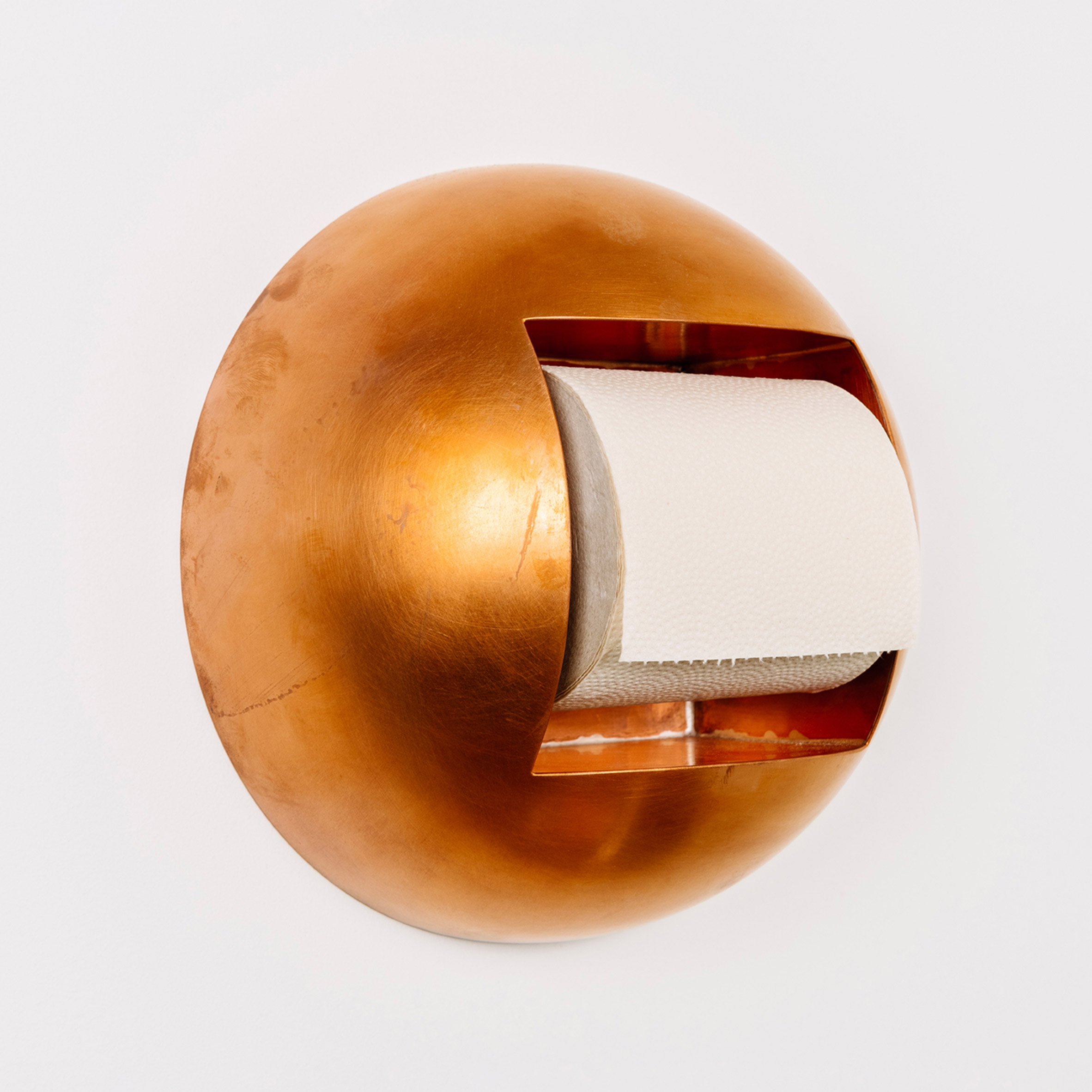 “Copper tends to be used in plumbing to create the piping behind the walls but she wanted to expose this beautiful material and bring it to the forefront,” said Korsavong.

“It also changes over time and patinates, depending on what environment it is placed in, so it has this unique ability to show the passage of time.” Multidisciplinary design studio Playlab created a toilet roll holder that doubles up as a visual joke. It features a real pair of scissors with one blade impaling a faux boulder and the other holding up the toilet paper in a nod to the classic game of rock paper scissors.

“There’s an element of danger associated with it because these scissors are not dulled, they’re super sharp,” said Critton.

“Most big box toilet paper contains all these chemicals and, in the US, the Koch brothers make many, many billions of dollars a year from its sales, which they funnel directly into lobbying against common sense environmental goals. So to me, the scissors make this statement of: ‘it’s not all soft and cushy’.”

The Koch brothers’ company Koch Industries not only manufactures toilet paper but also controls oil refineries, and has been widely accused of funding the roll-back of environmental regulations in the US. 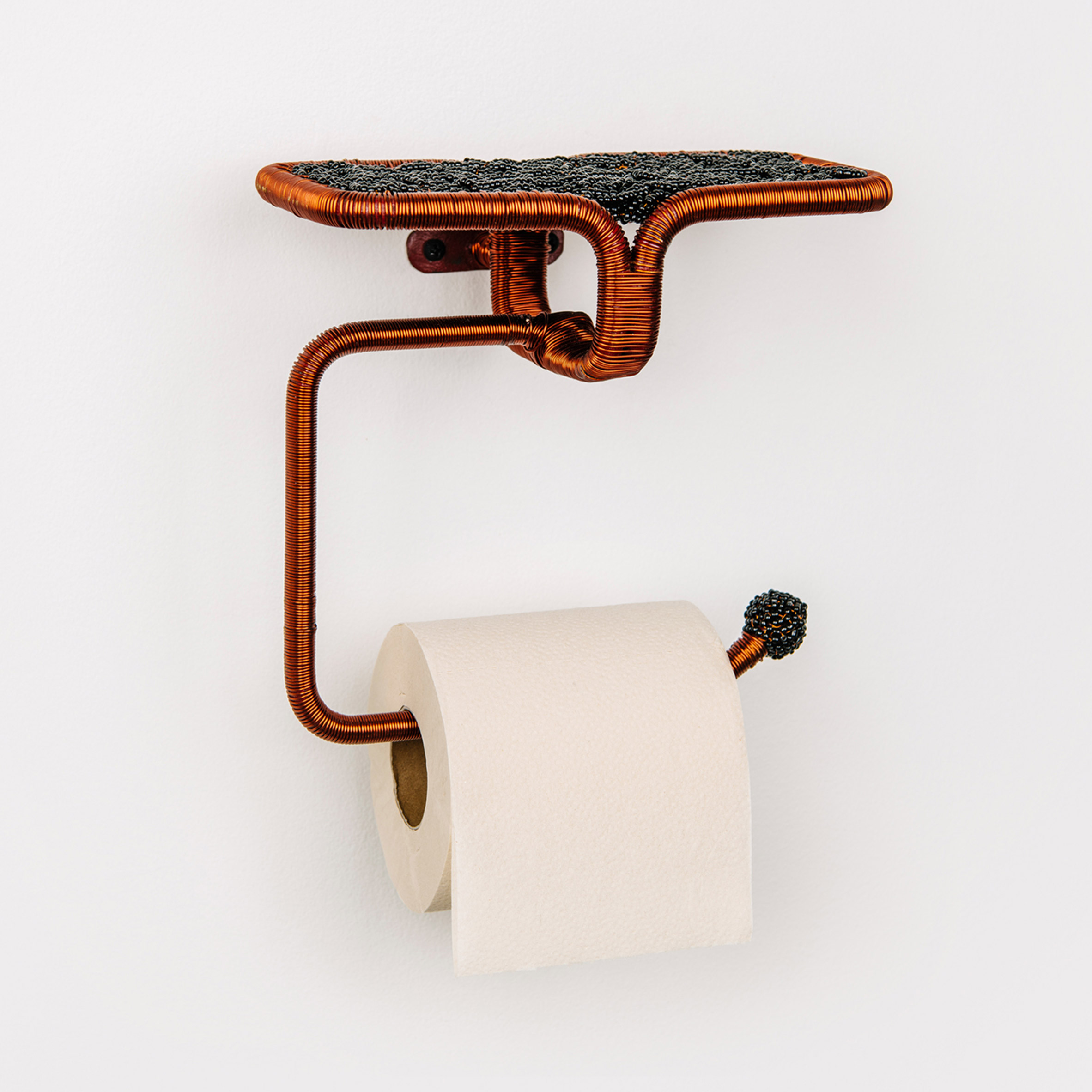 Lagos-based Nifemi Marcus-Bello made use of the same materials that grace the royal crowns and sceptres of Nigeria’s Yoruba tribe. The frame is wrapped in copper wire and topped with a dense web of beads, which used to be made locally but are now imported from England.

“The shelf on top is based on the silhouette of an iPhone because so many people bring their phone to the bathroom these days,” said Critton.

“I think the literal translation of Ọpá Ọba is king’s sceptre, so beyond it being a comment on globalisation it’s also a little bit of a joke about the idea of the toilet as a throne and the phone as the sceptre.” 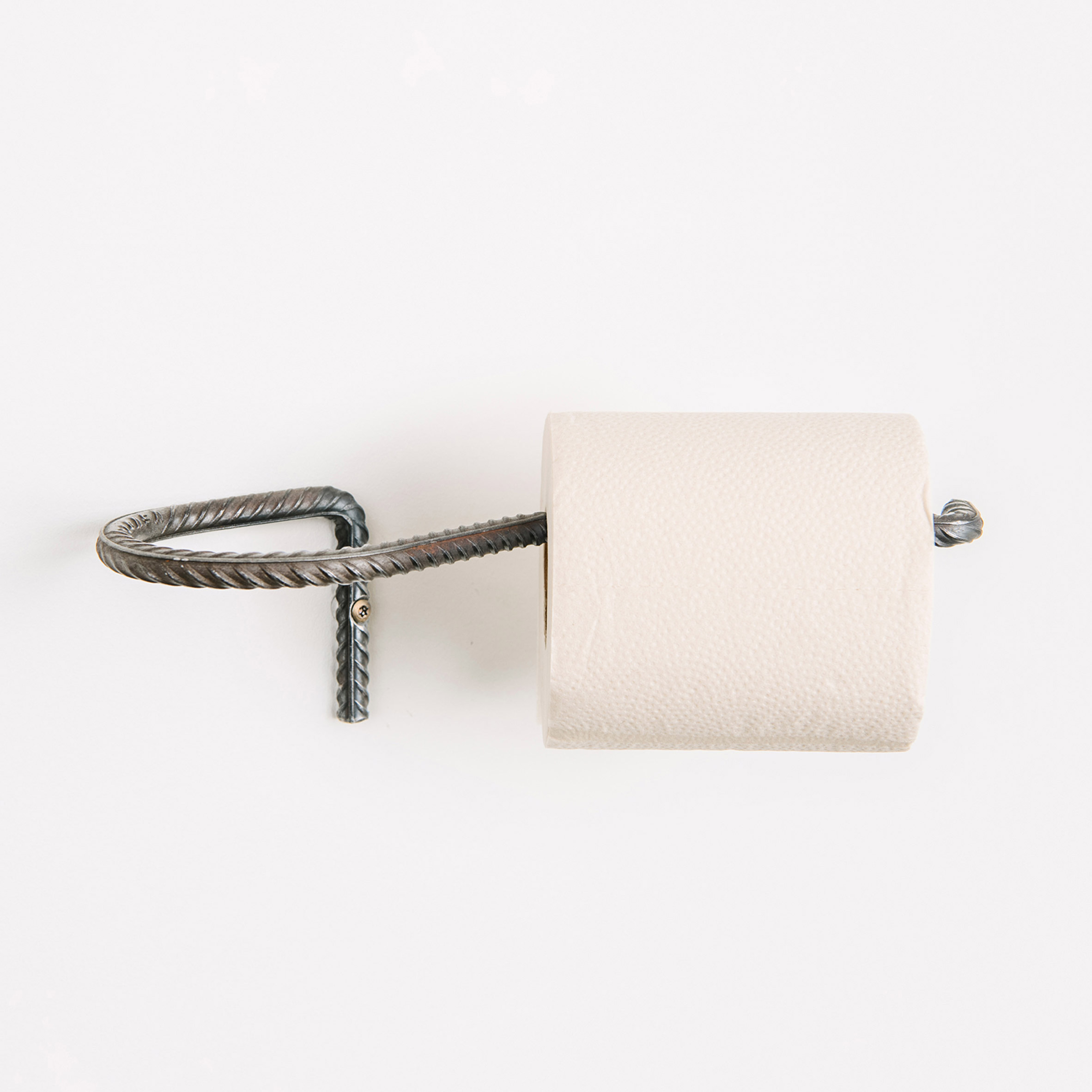 A Rebar is a stainless steel reinforcing bar, that is commonly used in construction to strengthen concrete structures. But in this case, Italian designer Martino Gamper allowed it to rise above its station and become an undulating toilet roll fixture.

“It’s a highly functional material but here it is shaped in this amazingly sensuous line,” said Critton.

“It really only takes one screw to attach it to the wall. And the rest of the support is created through the actual rebar, which is strategically bent to prevent the roll from moving around.” 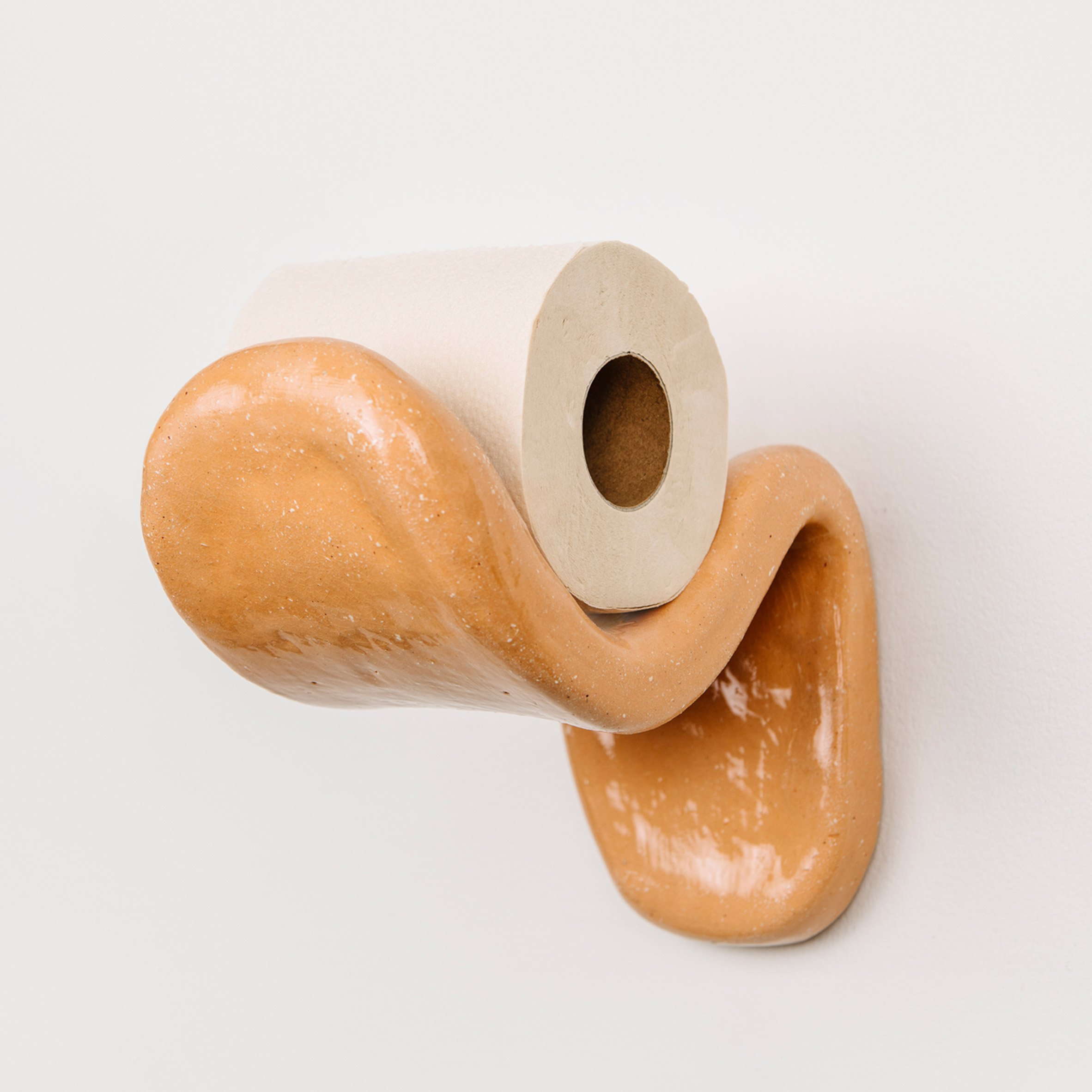 Toilet Tongue No. 1 by BNAG

BNAG, a design duo hailing from Karlsruhe in Germany, created a series of seven ceramic fixings, among them this flesh-coloured tongue, which rolls out from the wall and gently cups the toilet roll to offer it to the user.

“This is one of those interesting quarantine stories where people had limited access to their studios and materials,” said Critton.

“In the case of BNAG, they only had a really small kiln that all the pieces had to fit inside of and ceramic was the only material they could really work with because they could mould, glaze and fire everything under their own roof in lieu of being able to work with fabricators.” Preciado is a Los Angeles designer, who became enamoured with the airconditioning vents on VW buses while he was stuck behind them in traffic, and decided to transpose this same visual language into a freestanding toilet paper tower made of powder-coated steel.

“On the one hand, he’s obviously solving for storage purposes by having multiple rolls on hand at one time and a clear knowledge of when you’re going to run out of this vital substance,” said Critton.

“But this one also has a bit of a behavioural suggestion, in that it does inspire you to just take one or two sheets at a time. Because of that really quiet vent out of which the toilet paper comes, you somehow prize each little tear away from the sheet.”