CoreLogic’s inaugural Women and Property: State of Play report released on International Women’s Day boosts evidence of the relationship between the gender pay gap and the gender wealth gap.

It suggests addressing gender income equality could support closing the wealth gap as it relates to real estate over time.

The report analysed a 2021 snapshot of property ownership by gender across Australia and New Zealand, by matching ownership gender with 41.2% of Australian properties, and 72.6% of New Zealand properties.

“There has been a lot of emphasis on understanding the access to wealth and earnings for women, but much of this has focused on income from wages, salaries and wealth accumulation in superannuation. Using CoreLogic’s extensive property data universe, we sought to understand rates of female property ownership.”

Women appear to lag behind men in property ownership

Eliza Owen, CoreLogic’s Head of Research and author of the report, says

“Unsurprisingly, the report found that rates of male property ownership are generally higher than women, but with important distinctions that highlight the relationship between the gender wealth gap and the gender pay gap, and have implications for institutional response.

CoreLogic estimates Australia’s residential real estate to be worth over $7 trillion.

Given there’s a high level of equity held in real estate, if you don’t own property, that’s a big source of household wealth and security you don’t have access to.”

“This wealth gap becomes a particular challenge around retirement, and it’s well documented that if you still have rental or mortgage costs at the time you retire, then you have a much higher incidence of falling into poverty.”

Rate of Property Ownership by Gender 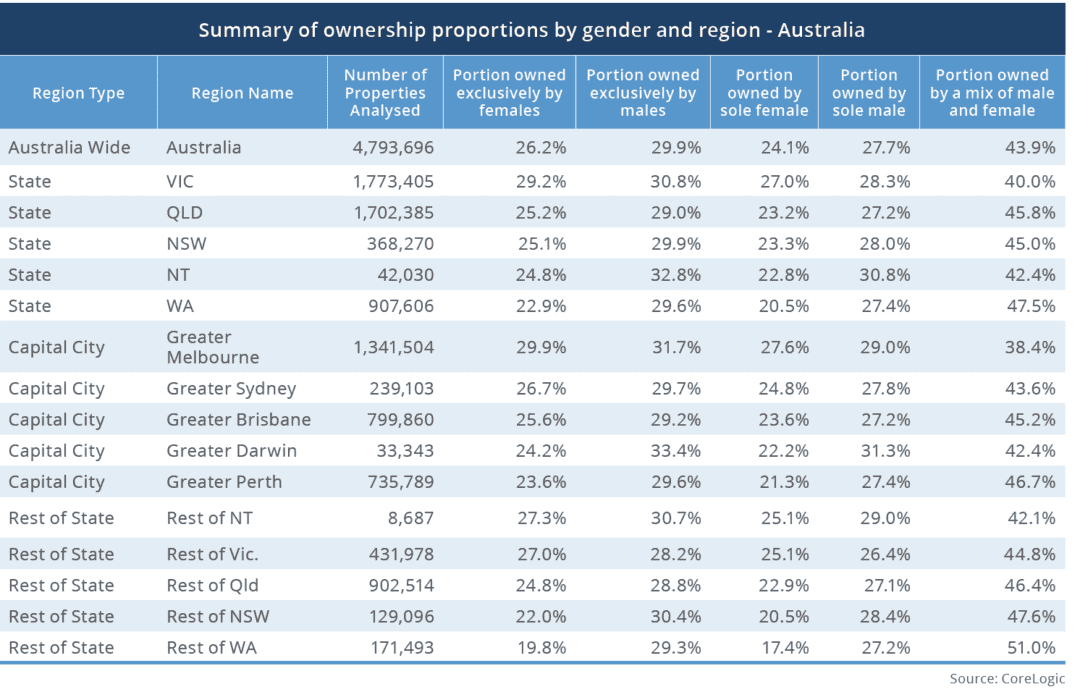