Dutch designer Antoine Peters has developed a technique for making textiles that appear to change or move when viewed from different angles.

With Lenticular Weave, Peters has found a way to make textiles that incorporate two different designs. The one you see depends on your viewing angle.

Just like in lenticular printing, this technique can be used to create playful juxtapositions and simple animations.

To show some of the possibilities, Peters has created a large textile wall hanging incorporating a range of image transitions, including a winking eye and an arrow that changes direction.

This textile was unveiled during the recent Dutch Design Week in Eindhoven.

“About 13 years ago, I was struck by the magic of lenticular printing,” explained Peters, who is based in Amsterdam. “I love the dynamics of movement, contrast, surprise, and delay.”

“I imagined these powers in direct connection with the viewer, user, or wearer,” he told Dezeen, “and ever since I have dreamed about translating this into a textile that changes when viewed from different angles.”

Lenticular images are dividing two or more images into strips and splicing them together.

When viewed through a lenticular lens – a three-dimensional surface made up of cylindrical lenses – the geometry will only allow one image to be visible at a time, depending on the angle.

To translate these processes into textiles, Peters teamed up with manufacturer EE Exclusives to develop a 3D weave with the same geometries as a lenticular lens.

As a jacquard specialist, EE Exclusives was able to help Peters find a way to create the splicing of images through the weaving process, rather than through printing.

“It is a complex play with the parameters of the machines and compositions of the yarns, in combination with the artworks and the layering and positioning of the yarns in the weave,” explained the designer. 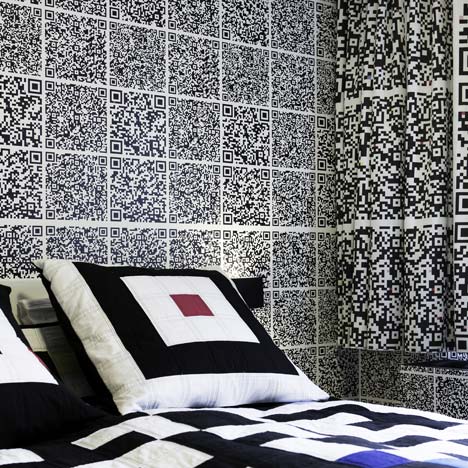 “I was aware that a lot of precision was needed, which is why I sought the collaboration with EE Exclusives,” he said.

“Even then, it took 18 months of trial and error, stretching the technical boundaries of the machines.”

Peters often brings an element of fun to his design projects. He first appeared on Dezeen in 2012, after creating a hotel room covered in QR codes, linking visitors to “pornography, pin-ups and other piquancies”.

He first started exploring the possibilities of lenticular design in 2013, when he created his Lenticular Dress.

Although his technique for making the dress was very basic, it got Peters thinking about the potential applications of lenticular imagery in interior design, products and fashion.

“When I close my eyes, I see this weave applied to walls in future space stations,” he reveals.

With Lenticular Weave, he has created the effect in a textile that is thick and durable, which means it could feasibly be marketed to a range of designers, manufacturers and retailers.

The installation created for Dutch Design Week was designed to show all the possibilities of the technique, across colour, pattern, image and text.

It takes the form of a cubist face – as Peters points out, the cubist style was all about playing with perspectives.

The designer hopes this piece will be a starting point for future projects and collaborations. He is keen to see the Lenticular Weave used in different ways, to create different experiences.

“What I especially like about my Lenticular Weave is that it triggers its observers to interact, to leave the static position, decentralise and start walking around,” he said.

“It takes time and movement to see and experience the total,” he added. “And I believe that when everybody slows down a little, by being forced to look, feel or think twice, the things we do or say will contain more empathy and awareness.”

Lenticular Weave was presented at Dutch Design Week 2021 as part of Things that Matter, which was exhibited in the Microlab Hall alongside a “deposit chair” designed by Ineke Hans.

Dutch Design Week ran from 16 to 24 October 2021 at venues across Eindhoven. See Dezeen Events Guide for an up-to-date list of architecture and design events taking place around the world.