The kit uses the same pattern of circles and stripes, which incorporates stylised versions of several London landmarks, that can be seen on the seats of the Piccadilly line.

Adidas designed the “disruptive” print in collaboration with Transport for London (TfL) to mark the fact that Piccadilly line trains stop at Arsenal tube station, which is located near the club’s Populous-designed stadium.

The pre-match kit will be worn by players before matches until the end of the season.

“Part of the fan culture is the journey taken to the stadium and the link between Arsenal and TfL.”

McGroarty also highlights how the design further ties the football club to the local tube station.

“We also wanted to celebrate the fact that Arsenal is the only club in the city with a tube stop named after them, after Gillespie Road was renamed in 1932,” McGroarty added.

“They’ve been in the borough of Islington since 1913 when they relocated from Woolwich to Highbury, meaning over 100 years based where they are now,” he continued.

The largely purple and blue seat covering used for the kit incorporates several London monuments including St Paul’s Cathedral and the Marks Barfield-designed London Eye, which is represented by a red circle.

The original seat pattern or moquette was designed by British design studio Wallace Sewell in 2010. The company is also responsible for the fabric on the Bakerloo line and the London Overground.

To make clear the collaboration, the London Underground logo was placed on the back of the shirt at the nape of the neck and on the leg of the tracksuit bottoms.

The clubs’ crest is embroidered on the left-hand side of the chest while the Adidas logo is on the other. 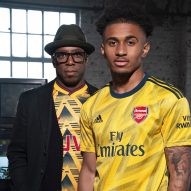 “After meeting with TfL we knew immediately we wanted to bring the famous visual of the Piccadilly line seats onto a jersey,” said Andrew Dolan, product manager at Adidas Licensed Football Apparel.

“TfL then shared the official moquette for the line; we adjusted this to fit on our pre-match silhouette,” he explained.

The shirt, which has a ribbed crewneck is made in part from polyester recycled from production and post-consumer household waste.

Five clothing items including a youth jersey and a reversible padded gilet vest from the range are available to customers via the Adidas website and official Arsenal club stores.

Alongside the kits, Adidas has released an Oyster card designed by London-based artist Reuben Dangoor.

Adidas also looked back to history for its design of the chevron-covered home shirt of its 2020/2021, which took cues from the club’s art deco crest.

The sportswear company also designed a kit for FC Bayern Munich based on the facade of its home stadium, Allianz Arena.