The Australian Federal budget next month will likely see a further blow out in the budget deficit due to the ongoing hit to tax revenue and need for more stimulus.

But is that really going to be a big problem?

In the recent Oliver’s Insight Dr Shane Oliver, Head of Investment Strategy and Economics and Chief Economist at AMP explained why we likely have to get used to a long period of high public debt and it may not be as big a concern as some think.

Here is what he said….

From “eye watering” to “eye popping”

Much concern has been expressed about the longer-term consequences of the blowout in budget deficits and public debt in response to the economic hit from coronavirus.

This is understandable given their scale. In Australia, the Treasurer described the projected budget deficit for this financial year of $185bn as “eye watering”.

And that was back in July! When the latest update is unveiled in the Budget next month it’s likely to be an “eye-popping” $230bn or so on our estimates, reflecting additional stimulus (including the bring forward of tax cuts, investment incentives, more infrastructure spending and stimulus payments) and the further blow to tax revenue from Victoria’s second wave.

And given the ongoing hit to tax revenue and need for more stimulus it’s likely to remain big for several years, even though some of the stimulus payment programs will end once the hit to the economy recedes (we are assuming a vaccine and/or antivirals are successfully deployed next year to control the virus).

Our revised budget projections are shown below.

Our view remains that the Government has done the right thing.

Fiscal stimulus has been necessary to protect businesses, jobs and incomes from the impact of the shutdown and associated uncertainty and without it we would be seeing a much bigger hit to the economy and ultimately to the budget and a slower recovery.

And further near-term stimulus will be necessary to boost demand.

But what about the longer-term consequences?

Will the debt ever be paid down?

Will fiscal austerity crimp the economy?

Or do we live with higher public debt indefinitely?

The current situation is not new. A

similar challenge was faced after WW2. 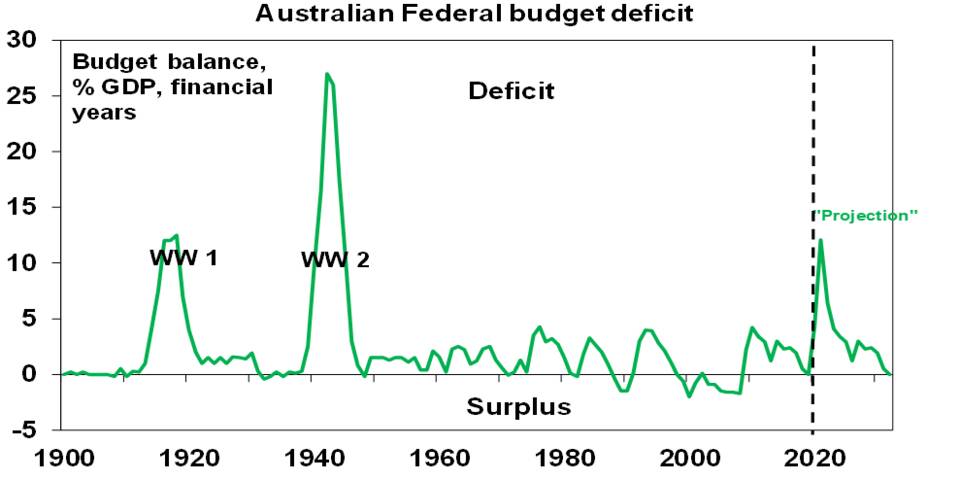 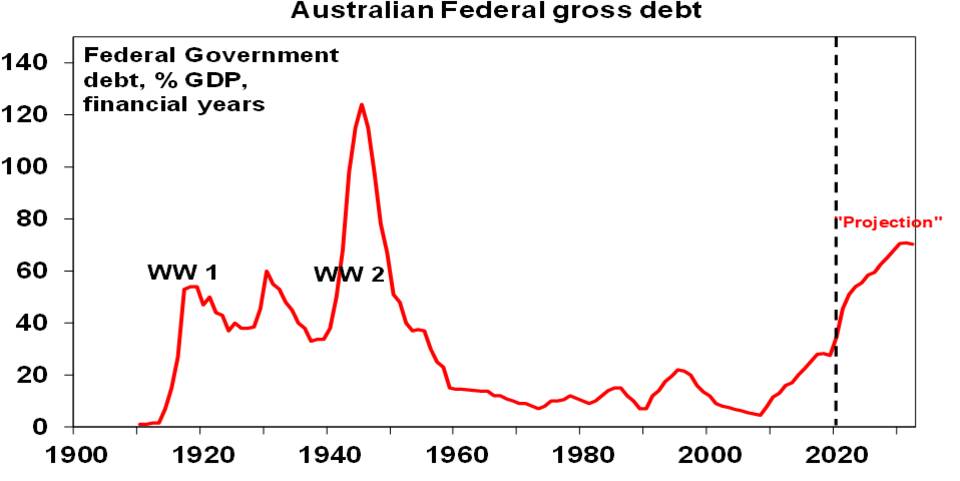 Interestingly the 1950s and 60s rarely saw balanced budgets let alone surpluses and so debt was not actually paid off.

The decline was facilitated by:

See the circled area in the next chart. 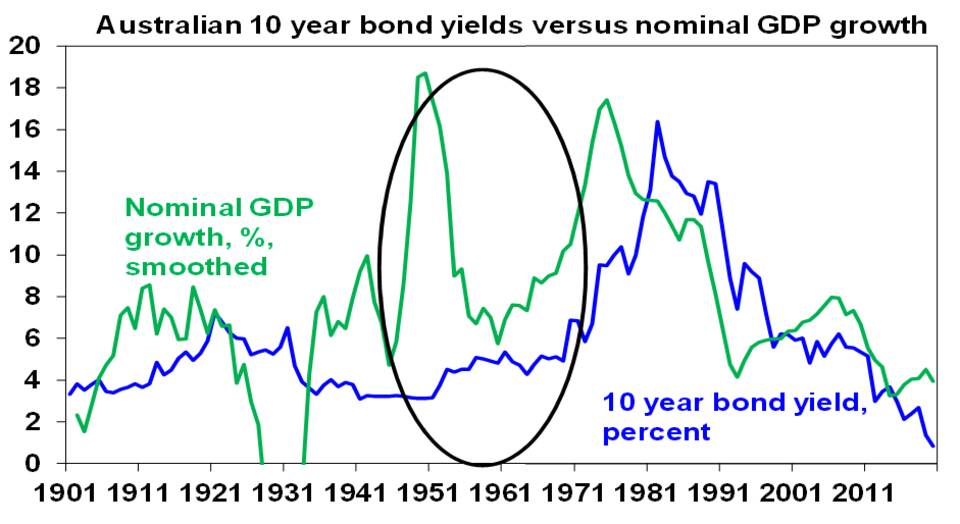 The low interest rates (helped by prudential regulations that forced financial institutions to hold a certain amount of their assets in government bonds) contained the interest burden on the debt and the strong level of nominal growth meant that the debt burden declined relative to the size of the economy.

The strong growth in the nominal economy reflected: 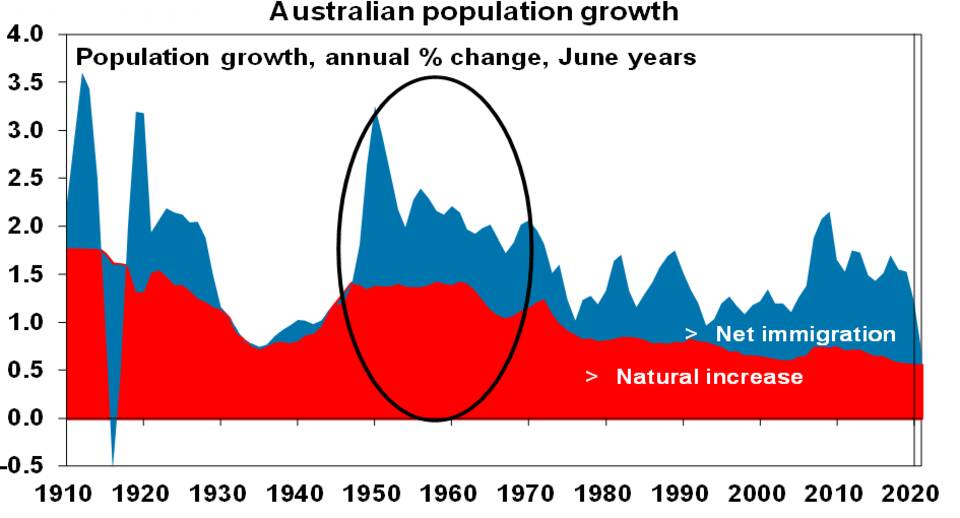 So Australia grew & inflated its way out of its WW2 debt burden.

Can Australia do it again? 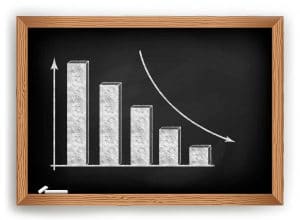 The Federal Government has so far ruled out big spending cuts (beyond the eventual ending of pandemic emergency programs) and another deficit levy.

And for good reason – if people start anticipating a hike in taxes or cuts to public services they will behave accordingly, and this will endanger the recovery.

Rather the Government has emphasised a strategy to boost growth – with the focus likely to be on tax reform, industrial relations reform, education and training, deregulation and increased infrastructure spending.

More on this is likely to be announced in the October Budget.

Higher inflation would help but the RBA has been struggling to achieve that for a while now and high levels of unemployment mean that it is likely still several years away at least.

So, a re-run of the post war experience, which saw the debt burden decline rapidly as growth took off, looks unlikely. 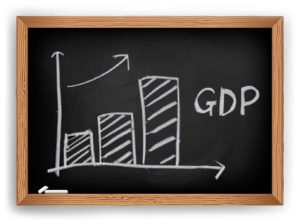 Hopefully it doesn’t take that long, but the key point is that based on last decade’s experience we likely have to get used to a long period of high public debt to GDP levels.

This is not necessarily a big problem.

First, Japan, Europe and the US have been running high levels of public debt for years now without a major problem.

And even with the projected blow out over the next few years it will still be relatively small.

So, it’s not likely to be a drag on Australian assets versus other countries.

This is well below what nominal economic growth is likely to be and so once budget deficits are reduced could help result in a faster decline in the public debt to GDP ratio than shown in the chart earlier.

Fourth, with Australia borrowing in Australian dollars and not dependent on foreign creditors, Australia is not at risk of a “foreign currency crisis” as a fall in the value of the $A will have no bearing on the Government servicing its debt.

Finally, it’s conceivable that if a problem arose the Government could cancel the bonds the RBA has purchased.

This would mean a loss on the value of the government’s investment in the RBA, but it would be offset by a fall in its liabilities.

The main constraint on this debt monetisation would be if inflation were to take off but that’s still a long way off.

The bottom line is that the blow out in public debt is a concern and we may have to get used to a long period of relatively high public debt in Australia and in other developed countries.

But this won’t necessarily cause a major problem.