After being confined to small-scale experiments for years, biomaterials finally catapulted into the mainstream in 2021 according to the architects, designers and manufacturers using them as building blocks for a new low-carbon economy.

“Biomaterials used to be niche,” said Regina Polanco, founder of bio-based textile manufacturer Pyratex, which has almost doubled both its sales and clients since 2020. “But we’ve seen a huge increase in need from big corporations.”

“In the last year, there’s been a real explosion in interest,” agreed Jad Fink of shoe brand Allbirds, which has developed a sugarcane bioplastic sneaker foam that’s now used by companies including Reebok and Timberland.

Plant-based alternatives to petroleum, concrete and steel which can sequester CO2 rather than just emitting it, have recently been backed by a wave of big-name investors, with Adidas and Hermès incorporating fungal mycelium leather into fashion pieces and BMW debuting a concept car with natural latex tyres and a steering wheel made from sawdust.

With growing investment, manufacturers have been able to ramp up their production capabilities while lowering their prices, making the range of biomaterials on offer more readily accessible and diverse.

This means thinking beyond wood, which SOM sustainability lead Mina Hasman describes as “yesterday’s material”, to include everything from hempcrete and mycelium insulation to seaweed wall tiles, as seen in the prototype home that Dutch design studio Biobased Creations constructed using 100 different biomaterials.

“We built a house on a real scale,” the studio’s co-founder Lucas De Man told Dezeen. “That was not possible a few years ago.”

“Biomaterials are going from trend to reality,” he added. “It’s going to be the fourth economic revolution.”

Natural materials were the basis of civilisation

Before being sidelined by synthetic materials with the advent of the industrial age, bio-based materials derived from plants, animals and other living organisms were widely used by humans to construct the world around them.

In recent years, design students, material researchers and scientists have been tinkering with adapting these long-established solutions for contemporary applications, as awareness grows about the waste and carbon emissions associated with our modern material palette.

Then, in 2021, those with deep pockets also began to recognise the potential of plant-based materials.

“We used to build bio-based and then we went through our ‘we are god-like’ period,” De Man explained. “Now, we have problems with too much nitrogen and too much CO2 in the atmosphere and we’ve realised that was not the best way to go.”

Biomaterials can offer a promising alternative to mainstream building products because they are made from renewable resources, which generally emit less carbon dioxide in their production and processing while also being easier to recycle or biodegrade.

When farmed in a regenerative way, they also have the potential to be carbon negative, as plants and organisms like algae and fungi remove CO2 from the atmosphere while they are alive and store it in their cells.

“In general, anything that is natural has the potential to draw more carbon down than it produces,” explained Fink, who is the vice president of innovation and sustainability at Allbirds.

Due to a lack of funding, innovations in this space have so far generally been expensive, hard to scale and relegated to experimental projects such as The Living’s Hy-Fi pavilion and the fish scale bioplastic developed by graduate Lucy Hughes.

But Polanco argues this is changing as governments are beginning to regulate polluting materials and businesses are setting their own decarbonisation goals, with nearly 50 per cent of leading companies in key markets from apparel to automotive already committed to reducing their so-called “scope three” emissions from materials.

“I believe that in the next couple of years, many brands won’t be able to keep using the materials they are using at the moment because there will be way more legislation,” said Polanco, adding that this is also coupled with growing bottom-up pressure from customers.

“Pyratex is a B2B company,” she explained. “But at the moment, we are receiving around five enquiries per day from consumers that are asking us where they can find our fabrics. This wasn’t happening in 2020.”

While regulations around the embodied carbon footprint of buildings remain lax, architects are starting to wake up to the importance of minimising not just the operational emissions of their buildings but also the emissions from materials and construction.

As a result, prominent architecture firms including Skidmore, Owings & Merrill (SOM) and Snøhetta have recently collaborated with universities on material research projects, investigating everything from mycelium building materials to concrete made with algae or biochar.

“We’ve been very much in the weeds of looking at biomaterials over the last year, much more rigorously than ever before,” said Hasman of SOM.

“We desperately need to reduce embodied carbon emissions and the market and supply chain is quite limited in its ability to offer solutions today.” 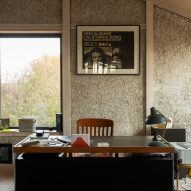 Ten tactile interiors that make use of natural biomaterials

Apart from wood, biomaterials have so far only been used to create small-scale buildings such as this year’s cork-clad Serpentine Pavilion and The Living’s probiotic pavilion at the 2021 Venice Architecture Biennale.

According to Hasman, that’s because safety performance tests for their use on structures upwards of four storeys have so far been lacking.

“The applications are still limited because there isn’t enough investment, funding and testing to confirm that they’re safe to use,” she said.

This is necessary in order to overcome regulatory hurdles, which are currently restricting the use of wood, hemp and other plant-based materials in buildings due to fears around combustibility.

But both Hasman and De Man expect that bio-based materials could be adopted at a mass scale within the next five years.

For that to become reality, companies will need not just to invest in materials but also switch from a competitive to a collaborative mindset, sharing their findings with the rest of the industry as Allbirds did with its bioplastic SweetFoam for trainers.

“We thought it was really important for other companies to get access to it,” reflected the company’s Fink.

“Not just because we’re nice people but because to make it cost-efficient and scalable, you’re going to need big chunks of industries, multiple industries, asking for this stuff.”

With this aim, SOM has open-sourced its research on timber towers while fashion designer Phillip Lim made the bamboo-and-seaweed mesh, which he developed with Pyratex as part of creating a petroleum-free dress, available to all of the manufacturer’s clients.

But scaling up bio-based materials also comes with many of the same risks as scaling up agriculture, where industrial farming practices see certain crops or animal products prioritised over all others and shipped around the world, causing emissions, deforestation, soil erosion and a loss of local biodiversity.

“When things grow very fast you always have to make sure that it’s ethical,” said De Man.

“Because biomaterials are there to change the system, not just to make sure that people don’t feel bad about the bad decisions they make.”

Over the next ten years, De Man argues, scaling up biomaterials will involve setting up closed material cycles that make use of abundant, local resources and actively regenerate ecosystems rather than exploiting them, so they can act as carbon sinks.

Biobased Creation’s prototype home, for example, includes insulation made from reed and flooring made from cattail – two marsh plants, which can help to rebuild the peatlands and wetlands that the Netherlands has lost to agriculture while still generating a profit for farmers.

“So you have this whole material cycle that is solving different problems at the same time,” De Man explained.

Similarly, Allbirds is currently helping its Merino wool farm in New Zealand to make its operations carbon negative by trapping more carbon in soil through regenerative farming practices such as rotational grazing than is released in the material’s production process.

Making biomaterial production truly regenerative also requires a system for reusing and recycling the materials into products of similar value to prevent an excess of biological waste, which could release its stored carbon back into the atmosphere during decomposition or incineration.

“The brands we work with are now much more interested in circularity than in biodegradability,” said Polanco. “Because even if you say this fabric is degradable under certain conditions, you can’t ensure that that will happen.”

Pyratex is already trialling this approach in the form of a take-back programme with Spanish fashion brand Neutrale, in which disused garments made from Pyratex fabrics are returned to the manufacturer to be converted into new textiles.

If the burgeoning biomaterials industry can manage these challenges effectively, we may look back on 2021 as a turning point in the way things are made and buildings are built.

The post Biomaterial companies see "explosion in interest" as sales double in a year appeared first on Dezeen.