Car brand BMW has unveiled an updated version of its electric iX SUV at the Consumer Electronics Show that can change colour from black to white in order to suit the driver’s mood and conserve electricity.

Dubbed iX Flow, the concept car is wrapped in a kind of “digital paper” that is also used to form the screen of the Kindle e-reader.

This can change colour in one fluid motion when prompted by an electrical impulse, making it possible for the driver to match their car to their personal style or the weather.

“Similar to fashion or the status ads on social media channels, the vehicle then becomes an expression of different moods and circumstances in daily life,” said Stella Clarke, who headed up the iX Flow project at BMW.

Turning the car reflective white on sunny days and heat-absorbing black in the cold could also help to cut the electric vehicle’s energy consumption, thereby increasing its range.

The iX Flow was presented at CES as part of a digital programme live-streamed from Germany and, according to BMW, is “the first car in the world whose exterior colour can be changed at the touch of a button”.

The digital paper used to wrap the car was originally developed by students of MIT’s Media Lab and functions with the help of traditional ink pigments used in the printing industry.

Each sheet contains millions of microcapsules, about as wide as a human hair, filled with negatively-charged white pigments and positively-charged black pigments.

Stimulating these capsules with electricity will prompt the chosen colour ink to move to the surface of the capsule, becoming visible from the outside.

Unlike traditional screens, the digital paper does not emit light and only uses power to change colour, not to maintain it. 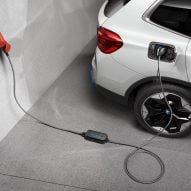 To mould the plastic sheet to the contours of the vehicle, BMW developed a triangle mesh pattern using a generative algorithm, which was laster-cut into precise segments.

After being fixed to a layer of circuitry, the entire bodywrap was warmed and sealed to create a seamless finish.

Although BMW has not yet announced plans to integrate the technology into its actual fleet, the carmaker is currently working on adapting it for different parts of the car, including the interior.

Future applications could include a colour-changing dashboard that won’t overheat and a flashing exterior that can help the driver find their car.

A number of other carmakers have developed concepts for vehicles that can change their hue or shape, but for now these they exist only as renders.

The Vision Next 100 concept by MINI has a colour-changing roof while the body of Renault’s Morphoz can be expanded for long-distance travel or compacted to fit into small parking spots.

The Consumer Electronics Show is taking place in person in Las Vegas for the first time since the start of the pandemic until 7 January 2022. See Dezeen Events Guide for an up-to-date list of architecture and design events taking place around the world.

The post BMW's iX Flow concept car can change colour "at the touch of a button" appeared first on Dezeen.