Anava Projects and Ashlee Harrison have curated an exhibition by emerging artists from the US and Caribbean at New York’s Carpenters Workshop Gallery, which includes sculptures woven from kelp and hand-carved furniture.

Called New Guard: Stories from the New World, the exhibition is part of the New Guard series by international gallery group Carpenters Workshop Gallery, which is based in London, Paris and New York.

At the gallery’s Manhattan location, Stories from the New World showcases pieces by seven emerging artist-designers hailing from the US and the Caribbean, which have been designed using materials ranging from wood and metal to concrete and kelp.

The works intend to unpack themes of heritage, place and identity and include pieces such as towering ceramic sculptures by Isabella Maroon that were created from smashed-up past projects.

The exhibition was curated by the gallery’s director of Americas, Ashlee Harrison, in collaboration with guest curators Anna Carnick and Wava Carpenter, founders of creative collective Anava Projects.

“We conceived the title ‘Stories from the New World’ in response to the narrative-driven nature of these designers’ work – all of whom engage, in their own way, themes of identity, heritage, and place,” Carnick and Carpenter told Dezeen.

“It’s also a reference to the historically Eurocentric lens of design discourse as well as the next generation of creative talents, who are bringing vital, multifaceted narratives into the global conversation.”

For example, artist Maryam Turkey presents Between Rise & Fall, an imagined cityscape crafted from paper pulp and supported by a plywood structure that represents both Baghdad and New York, the two places where she was respectively raised and then fled to with her family in 2009 as a refugee.

“The exhibition frames objects as artefacts of the human experience,” acknowledged Carnick and Carpenter.

“Dérond and Fines draw inspiration from collective memories of family, using their hand-carved wooden pieces to honour their Caribbean and Cameroonian heritages,” said Carnick and Carpenter. 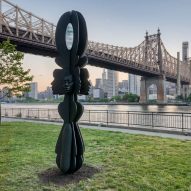 Other projects featured in the exhibition include Between Salt and Water by Indian-born, New York-based artist Anubha Sood.

Informed by her investigation into the environmental consequences of the textile industry with a focus on India, Sood weaved a whimsical collection of sculptural objects from kelp, linen, cotton and rayon yarn, which are displayed on maroon-coloured plinths.

The pieces seek to raise awareness of the decline of kelp forests due to climate change, whilst also underlining the importance of making creative work as a personal practice.

“All of the work celebrates the storytelling power of design, emphasising design as autobiography,” explained Carnick and Carpenter.

Stories from the New World follows on from The Graduate(s), a 2017 exhibition by Carpenters Workshop Gallery’s London location that was curated by trend forecaster Lidewij Edelkoort and showcased emerging European creatives.

Carnick and Carpenter explained what drew them to work on Stories from the New World.

“When we were approached to guest-curate the latest iteration, we were honoured, recognising that the project would be seen as a departure from the gallery’s esteemed, historically European-based programme,” they said.

“We also understood that the show offered a rare, exciting opportunity for unique design voices on this side of the pond to tell design stories not often heard in broader, Eurocentric international conversations.”

Other past exhibitions by the gallery include the Slump collection by designer Paul Cocksedge, which comprised furniture made from glass pressed over rocks.

The photography is by Matt Harrington.

New Guard: Stories from the New World is on show at Carpenters Workshop Gallery in New York City from 20 October 2021 to 22 January 2022. See Dezeen Events Guide for an up-to-date list of architecture and design events taking place around the world.