British designer Es Devlin unveiled a labyrinth installation encircled by plants and trees during Miami art week to mark the 100th anniversary of the luxury brand Chanel’s No.5 perfume.

Named Five Echoes, the installation is formed of a series of symmetrical winding ramps and maze-like passages with a raised circular platform at its centre.

“The title Five Echoes is on one level a description of the form: five concentric circuits of a labyrinth ‘echoing’ around a central platform,” Es Devlin told Dezeen.

“On another level, it references the ancient Greek dance from which the labyrinthine form is derived – as if those ancient footfalls still echo within its corridors,” she said.

“The word labyrinth originally referred to a dance, and later the pattern of the marks left by the dancer’s feet, which were extruded to become the architectural form we now refer to as a labyrinth,” Devlin added.

The installation is located at Jungle Plaza, a concrete park in Miami Design District. Surrounding the structure, Devlin planted 2,000 plants and trees of various shapes and sizes.

“The transformation of the concrete heat island of Jungle Plaza into a 2,000 plant forest is a rehearsal for the kind of space it could become if the urban forest were to be installed permanently,” said Devlin.

“It’s a rehearsal for how people might feel if they spent more time among the phytoncides (essential oils) produced by trees – proven to decrease stress, help resist infection and cancer, and improve sleep.” 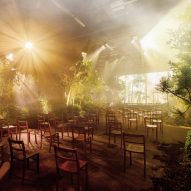 Two curving ramps surround the labyrinth and lead visitors to the raised platform at its centre.

Across its floor, the platform is adorned with sundial-like markings that are said to reflect the time it takes for the molecules of the perfume to evaporate while also mimicking the maze-like corridors below.

Three openings, at the front and sides of the structure, lead visitors inside the building where they can stand beneath the platform and see it from below.

Here, the perfume informed-markings are illuminated by the sun’s light above, while additional openings lead visitors through labyrinth paths.

Devlin worked closely with Chanel’s in-house perfumer Olivier Polge to transform the molecular language of its No.5 perfume into a soundscape and light installation that is emitted from the structure.

The materials used in the installation, including timber and fabric, will be donated to local arts groups while the trees and plants will be replanted locally in collaboration with Million Trees Miami.

“This project aims to balance the echo of the emissions inherent in its production by inviting 2,000 trees to work as co-authors of the piece and replanting them so they can grow and sequester carbon for hundreds of years while offering health-enhancing benefits to those who spend time among them,” said Devlin.

“My hope is that at least five of the trees’ names echo through visitors memories when they leave: South Florida Slash Pine, Live Oak, Dahoon Holly, Ylang Ylang, Wax Myrtle – perhaps the first step towards caring enough about other species to save them from extinction is to learn their names.”

Earlier this year, Devlin created an indoor forest titled the Conference of Trees for The New York Times Climate Hub at COP26. At this year’s London Design Biennale, Devlin filled the courtyard of Somerset House with trees for her Forest for Change installation.

Five Echoes is on show at Jungle Plaza until 21 December 2021. It launched during Miami art week, which also involves Design Miami and Art Basel Miami Beach. See Dezeen Events Guide for an up-to-date list of architecture and design events taking place around the world.

The post Es Devlin creates labyrinth in Miami to celebrate 100 years of Chanel No.5 appeared first on Dezeen.