The European Commission has proposed an overhaul of urban infrastructure to encourage more walking and cycling as part of the EU’s aim to become a net-zero continent by 2050.

If passed, the Efficient and Green Mobility package would require the 424 largest cities in the Trans-European Transport Network (TEN-T) to hash out sustainable urban mobility plans (SUMPs) centred on these kinds of “active mobility” modes by 2025.

Supported by increased funding, this would help the EU wean its cities off fossil fuel vehicles, ease congestion and noise pollution as well as working towards the decarbonisation goals set out in the European Green Deal, which require emissions from cars to be cut by 55 per cent come 2030.

The EU has already tripled its spending on cycling and walking projects in recent years, investing €2 billion between 2014 and 2020.

But the Efficient and Green Mobility package is unprecedented, according to the European Cyclists’ Federation, in that it elevates walking and cycling to an EU-wide policy priority.

“This is the first time in history that the European Commission prioritises investment in these modes as the backbone of urban mobility,” the federation said.

Proposals could cut emissions by 90 per cent

These focus on overhauling the TEN-T system of interconnected railways, waterways and roads across the continent, increasing long-distance and cross-border rail traffic, updating and developing smart mobility services such as mobility apps, and improving urban mobility by focusing on public transport, walking and cycling.

By moving people and goods from fossil fuel-powered cars and trucks onto a cleaner “multimodal transport network”, the European Commission says these measures could cut transport emissions by up to 90 per cent.

As part of the proposed legislative overhaul, the SUMPs originally introduced as a voluntary initiative in the EU’s 2013 Urban Mobility Package would be made mandatory for hundreds of large and medium-sized cities in the TEN-T.

London, New York, Paris and Milan give streets to cyclists and pedestrians

In addition, the guidelines for formulating these plans would be revised to prioritise expanding and improving infrastructure for bikes, pedestrians, e-bikes, scooters and public transport.

This would include creating quality road infrastructure that protects users from fatal accidents, maintaining the “continuity and accessibility of cycling paths” and, eventually, formulating rules to improve the safety of micro-mobility vehicles, which have been responsible for a growing number of accidents in recent years.

Local and regional authorities would be supported by targeted funding in order to implement their plans.

According to the EC, this would not just generate emissions reductions but also help to improve the health of local residents.

“Active mobility modes such as walking and cycling are low-cost and zero-emission forms of mobility which can also bring about health co-benefits associated to more active lifestyles,” reads the Urban Mobility Framework of the Efficient and Green Mobility package.

“In order to develop their full potential, they should be properly addressed in urban mobility policies at all levels of governance and funding, transport planning, awareness-raising, allocation of space, safety regulations and adequate infrastructure.”

Installing bike paths can even lead to economic benefits for cities as medical costs and travel times are reduced, the EC argued.

In Helsinki, for example, a study found that for every euro invested in cycle lanes, the city saved €3.60. 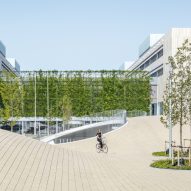 Later this year, the EC is set to recommend that member states roll out a national programme for all their cities to adopt a SUMP “with public transport and active mobility at its heart”.

The news comes after a number of cities including Paris, Milan and London took street space away from cars and reallocated it to cyclists and pedestrians in response to the Covid-19 pandemic, while New York established cycle paths on its Brooklyn and Queensboro Bridges.

The top image shows the Karen Blixens public square in Copenhagen as photographed by Rasmus Hjortshøj.

The post European Commission prioritises cyclists and pedestrians in cities for "first time in history" appeared first on Dezeen.