Design studio GoodWaste has collaborated with Selfridges to give new life to the department store’s waste materials, recycling them into lamps, candles and vases for sale in its London location.

The aim of the Super Circular Department Store project was to reimagine waste materials as a valuable local resource by exploring how department stores could create marketable stock from their own refuse.

The five-piece collection, which includes two candles, two table lamps and one vase, was made using scrap wax, steel and acrylic sourced from Selfridges’ Oxford Street store and the surrounding area.

The products were completed with components from local suppliers, including LED bulbs by London-based lighting brand Tala, before going on sale in the same shop.

“We’ve designed this collection of homeware to be representative of a new model of super local, super circular production,” said GoodWaste.

“As with any department store, Selfridges manages large amounts of waste through store fit-outs, temporary brand concessions and packaging,” the studio continued. “With their help, we started to investigate the material flows of the store.”

“We believe in real and actualised solutions wherever possible, so it was imperative for us that the project culminated in a real collection of products that went on sale to the public at reasonable prices.”

GoodWaste recycled steel sheeting from a former Selfridges concession stand to make the Dot and Slot table lamps, which take their names from the different perforations that are punched into the metal.

The studio decided to turn the scrap steel into lights after seeing the alluring shadows that were cast through the cut-outs.

Each lampshade was welded into shape and painted in either white or cobalt blue, with the Dot design resembling an upside-down taco shell.

GoodWaste assembled the items using only the reclaimed sheets of steel and standard electric components to ensure all attention remains on the waste material itself.

All parts of the lamp can be unscrewed for recycling or reuse in other designs once the lamp has reached the end of its life. 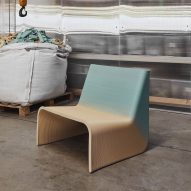 Offcuts of Corian surfacing, taken from disused Selfridges display boxes, were CNC cut and heat formed to create the ribbed Bora vase, with its dented shape designed to represent “the revival of the material from the skip to the shop floor”.

The Crack candles were made from waste wax donated by churches and restaurants from the area around Oxford Street.

The candles, which are designed to be snapped in two, mimic the natural breaks and raw edges of stone.

“We believe the beauty of the collection lies in the way in which each product celebrates its own provenance,” said GoodWaste. “Each design is highlighting the source material, the waste, through its form.”

“Unlike most sustainability projects, which focus on plastic alternatives and highly refined, often energy-intensive new materials, we are effectively saying: look how little you have to do to go from waste to useful, ugly to beautiful,” the studio added.

“While materials are cleaned, cut and formed, they are not reconstituted, broken down to almost nothing or held together with questionable binders. It’s a direct, honest approach.”

Super Circular Department Store has been shortlisted in the homeware design category of this year’s Dezeen Awards.

Other products also nominated in the category include a collection of graphic tapestries designed for people with colour blindness and everyday hardware items that have been upcycled into quality homeware by The Misused.