The Australian government’s response to the coronavirus crisis is to be, on the whole, applauded.

They quickly prioritised the health of our nation and prevented the spread of the early outbreak.

Terms such as ‘flatten the curve’ and ‘social distancing’ – phrases that barely existed just months prior – became part of the national vernacular.

But of course, the shutdown had its own side effects, with the health of our economy put at risk.

The hibernation of business operations and the end of pay packets for huge swathes of employees were the precursor, and dire predictions amongst economists soon followed.

Politicians in Canberra stepped up to provide assistance with programmes such as JobKeeper ensuring a steady pay packet flowed into households and kept businesses afloat.

But there was other assistance too – and one scheme jumped on in earnest by Aussies was the ability to access a portion of superannuation to help cover the bills.

It seemed like a much-needed lifeline for many, but the sting in the tail of this policy is more toxic than you might realise. Early access to super has some very personal implications and could well kill your chances of securing a home loan.

The COVID-19 early release of the super scheme allowed those adversely financially impacted by the economic slowdown to apply for one-off access in the 2019/20 financial year of up to $10,000 of their super.

The ongoing crisis then saw the scheme re-implement in the 2020/21 financial year, with a new application required to access another $10,000. That means even if you were approved in the previous financial year, your eligibility needed to be reassessed the following year.

To be eligible for the scheme, a citizen or permanent resident of Australia and New Zealand must require the funds to assist in dealing with adverse economic effects from COVID-19.

In addition, one of the following circumstances must apply:

Federal Treasurer Josh Frydenberg confirmed in July that more than 2.6 million Australians had taken up the offer.

“We know that almost 60 percent of those accessing their super early have used it or plan to use it to meet essential day-to-day expenses, including paying down debts, with another 36 percent adding the money to their savings,” he said in a report by the ABC.

While I applaud the plan’s ability to assist those in genuine need, I have a particular concern for those who accessed their super early and popped it in savings.

In the immediate aftermath of the shutdown, there was a lot of fear running through households about their financial survival.

And many acted in haste to take money out of super, frightened they’d be out of work for months or years to come and the dollars should be tucked away for a rainy day. 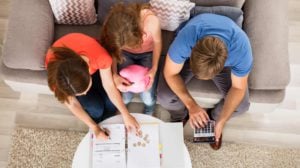 While there were certainly those who needed the $10,000, in the treasurer’s own words, 36 percent of those who took the super put it in their savings.

As I write this blog in September 2020, we’ve seen the monthly unemployment rate drop from 7.8 percent in July, to 7.6 percent in August.

I’d call that high but firming.

In addition, many businesses have adapted to meet COVID plan requirements and their employees are now doing more hours.

In addition, JobKeeper has been extended to help those that are still in trouble.

In short, a huge number of Australians who accessed their super early in fear of what was to come have discovered they are more financially resilient than first thought… and they could have survived without the super boost.

So how could this hurt my home loan application?

Interest rates have fallen to record lows across all lenders making the opportunity to borrow funds for home and investment loans, or refinancing, very attractive.

And, although borrowing guidelines among lenders remain tight, it’s been made clear that those taking advantage of most COVID support programs won’t be penalised on future loan applications.

I say ‘most COVID support programs’ because this isn’t the case for those who accessed their superannuation.

You see, to be eligible to get this money, you needed to demonstrate genuine financial hardship as a result of COVID – and there’s no escaping this admission when making a loan application.

So, if you only just qualified for the scheme and accessed the money to boost your savings ‘just in case’, you have pretty much torpedoed your chances of securing a home loan. It’s impossible to argue that you have the means to service loan repayments if records show that you took money out of super early because you were under financial stress.

And I can tell you, there is simply no negotiation with the banks on this one.

So, I implore you, if you plan on applying for a home loan in the near future but are also contemplating drawing on your super… don’t.