An experience of 24-hour surveillance led Design Academy Eindhoven graduate Hsin Min Chan to create a dress that exaggerates the “to-be-looked-at-ness” of its wearer.

The dress is designed to empower its wearer by making them both highly visible but also unapproachable.

Hsin Min Chan developed the design, called To-be-looked-at-ness, after being detained by Taiwanese authorities and placed under constant surveillance.

The event took place at the start of the pandemic. With Design Academy Eindhoven forced to close, Chan had decided to leave the Netherlands to be with her family back in Taiwan.

On arrival, the designer was told she would need to go into isolation due to Covid protocols. She initially protested, which led to her being arrested and placed in a hospital isolation ward with a 24-hour camera above her bed.

The only human contact she had over this time came through an intercom system. She was given no clear indication of how long the testing procedure would take.

“I was really aware of the surveillance camera, pointed straight at my bed,” she told Dezeen.

“I felt powerless and helpless, so in the beginning I just hid myself under a blanket and cried.”

After five days, Chan decided to stage a protest against the “dehumanising” way she was being treated, by putting on a performance of hysterics.

“I changed my pose to make sure the camera could see me, then I just screamed and yelled,” she said.

This had an instant response. The voice on the intercom told her they would speed up the process of testing and she was released later the same day. 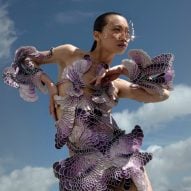 “They treated me not as a human being but as a dangerous body. So I turned myself into a dangerous body that they couldn’t handle. I used dehumanisation as a strategy to empower myself.”

Chan decided to employ the same strategy to change the way she is perceived day-to-day, particularly by men.

It was this that led to the design of a giant dress, which forces those around to both take notice and give way.

“I’m super aware of how I look and how people look at me; I’ve never left my house without makeup,” she explained. “I wanted to break down other’s control of me.”

The structure is formed around a large metal mesh, over which Chan has added various materials including papier-mâché, plater, fabric, resin and expanding foam.

The design incorporates images of Chan’s face and body. There are also pieces of furniture, which reference her experience in the isolation ward.

“I always stayed on the bed because there wasn’t that much furniture, even though the space was big,” she said. “I feel it was a disciplinary device to control my behaviour.”

To wear the dress, Chan enters through a gap in the rear and climbs up on a ladder structure concealed inside.

She can conceal other people inside the dress, to help her move around. The ladder system is on castors, so it can be pushed from inside. But Chan has to direct, as her helpers can’t see where they are going.

“When I start moving, people have to make a path for me. It’s really empowering,” added Chan.

Photography is by Jian da Huang, unless otherwise indicated.