The prize rewards up-and-coming product designers with a £5,000 bursary and the chance to exhibit their work in a solo show at the museum, in a bid to “champion new talent and nurture the development of a vibrant design sector”.

Collins, who is known for his afrofuturistic carpentry pieces, was selected by a judging panel including members of the Design Museum’s curatorial team and the daughter of late American textile designer Ralph Saltzman, after whom the award is named.

“The judges were almost surprised to find themselves awarding this prize to a furniture designer given the scope of design today,” said the Design Museum’s chief curator Justin McGuirk.

“But it was the way Mac Collins channels an alternative cultural heritage through otherwise traditional objects that felt like it was pushing in a new direction.”

Collins first rose to prominence with his throne-like Iklwa chair, which he designed while a graduate student at Northumbria University and which was later picked up for mass production by English furniture maker Benchmark.

His work often explores the African diaspora and his own Afro-Caribbean heritage, whether creating a homage to Senufo stools or naming Iklwa after the short spear used by the Zulu.

The designer won the inaugural Ralph Saltzman Prize from a shortlist of five nominees, each put forward by a more established studio.

Collins was nominated by London practice Industrial Facility, which praised the designer for his unique visual language.

“What makes Mac exciting to me is that he seems to be very good at both of these, asking different questions and answering them differently to what you may expect,” he added.

“Yes, his results for some people may not always be easy on the eye, but this is exactly what we like. It makes you stop for a moment and try to understand his language.” 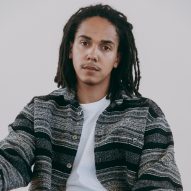 A retrospective of the designer’s work will be on show at the Design Museum from 2 February to 2 April 2022, marking his first major solo exhibition.

Collins plans to use the financial and creative freedom afforded to him by the bursary to explore a broader range of mediums and more conceptual, speculative narratives.

“Through form, I am ultimately interested in the communication of complex ideas,” he said. “The degree of financial security here will enable freer expression in this pursuit.”

“Though I have mostly communicated through the medium of furniture, I do not see the future of my practice defined by such strict categories of creative expression.”

The Ralph Saltzman Prize, which is sponsored by the Salzman Family Foundation, is the latest in a growing list of Collins’ accolades, which includes the 2018 New Designers Belmond Award and last year’s London Design Medal for emerging designers.

In an exclusive interview following the ceremony, the designer spoke to Dezeen about how his own personal and familial history influences his work.

The Mac Collins retrospective will be on show at the Design Museum in London from 2 February to 2 April 2022. See Dezeen Events Guide for an up-to-date list of architecture and design events taking place around the world.