In an effort to make solar panels beautiful, Marjan van Aubel has created translucent, stained-glass-like photovoltaics, which have been unveiled as part of the Netherlands’ pavilion at Dubai Expo 2020.

The solar panels are installed on the roof of The Dutch Biotope pavilion, where they serve the dual role of powering the exhibition and allowing sunlight into the space.

The panels have a moiré-effect pattern rendered in pinks and blues, and cast tinted light onto visitors in the space.

Van Aubel created the work to show that as well as providing an important source of renewable energy, solar panels “can be beautiful and a form of art”.

“At different points in the day the light, shadows and colours will change and so I hope it feels like a constantly changing immersive experience, similar to the light falling through a stained-glass window,” van Aubel told Dezeen.

“Besides providing power for the pavilion, I like the fact that the colours chosen for the design are not only beautiful but also cool down the pavilion,” she continued.

The Dutch Biotope pavilion, designed by V8 Architects, is a miniature self-sustaining world that creates its own water, energy and crops.

The colours of the solar panels allow light in at the wavelengths that plants need for photosynthesis, between 400 and 700 nanometres.

An additional goal of van Aubel’s is to further the use of more sustainable materials in the production and use of solar panels.

“Both batteries and standard solar cells are made of rare and toxic materials,” she said. “It’s important for me to see where things are produced and of which materials they are made.”

The solar panels in The Dutch Biotope pavilion use coloured organic photovoltaics from manufacturer Armor Asca.

They are created using light-absorbing organic dyes that cover tiny particles of titanium dioxide nanomaterial to turn sunlight into electricity.

They are printed on a thin, flexible and recyclable PET film that can be rolled up for transportation, and van Aubel has designed the installation to be easily disassembled for circular use.

“The OPV used for The Netherlands Pavilion is different to traditional solar cells,” the designer said. “We have used a third-generation organic thin film technology that works and looks different from the standard ones and their energy pay back time is just a couple of months.”

“This is a massive difference if you compare it to monocrystalline or polycrystalline cells, the ones you see on roofs,” she continued.

The solar cells were shipped from Amsterdam to Dubai and rolled out onto the glass of the pavilion’s roof in what van Aubel describes as a simple assembly process.

They are covered with a second sheet of glass and electrically connected to a local battery that powers the pavilion.

After the Expo, the solar panels are destined for a new destination, which has yet to be disclosed, while the glass sandwiching the foil will go back to its manufacturer, in keeping with the pavilion’s circular ethos.

The Dutch Biotope pavilion is located in the Sustainability District of the Expo, and van Aubel told Dezeen she hopes it gives people the opportunity to educate themselves about the technology and design available to steer the world into a post-fossil fuel future. 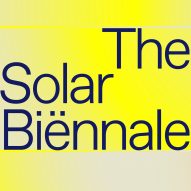 “This may be the first time people will experience solar power in this way,” she said.

“I hope it will change their perspective on what is possible in terms of solar integration, especially in Dubai, where there is a lot of sun, and a lot of surfaces to create power in a beautiful way.”

Van Aubel has been developing the solar panels for several years and first unveiled renders of the design in a live talk as part of Dezeen Virtual Design Festival last year.

The solar designer’s other recent work includes Sunne, a lamp to be hung in front of windows so it can generate its own energy, and she is one of the founders of an upcoming Solar Biennale that launches next year.