Charles Holland Architects has designed a pyramidal wayfinding post called The Tooley Street Triangle as a “symbol of celebration” for the London Festival of Architecture.

The Tooley Street Triangle was designed as part of a competition organised by the London Festival of Architecture (LFA) and Team London Bridge in 2018 to help people find their way around the city’s London Bridge area. 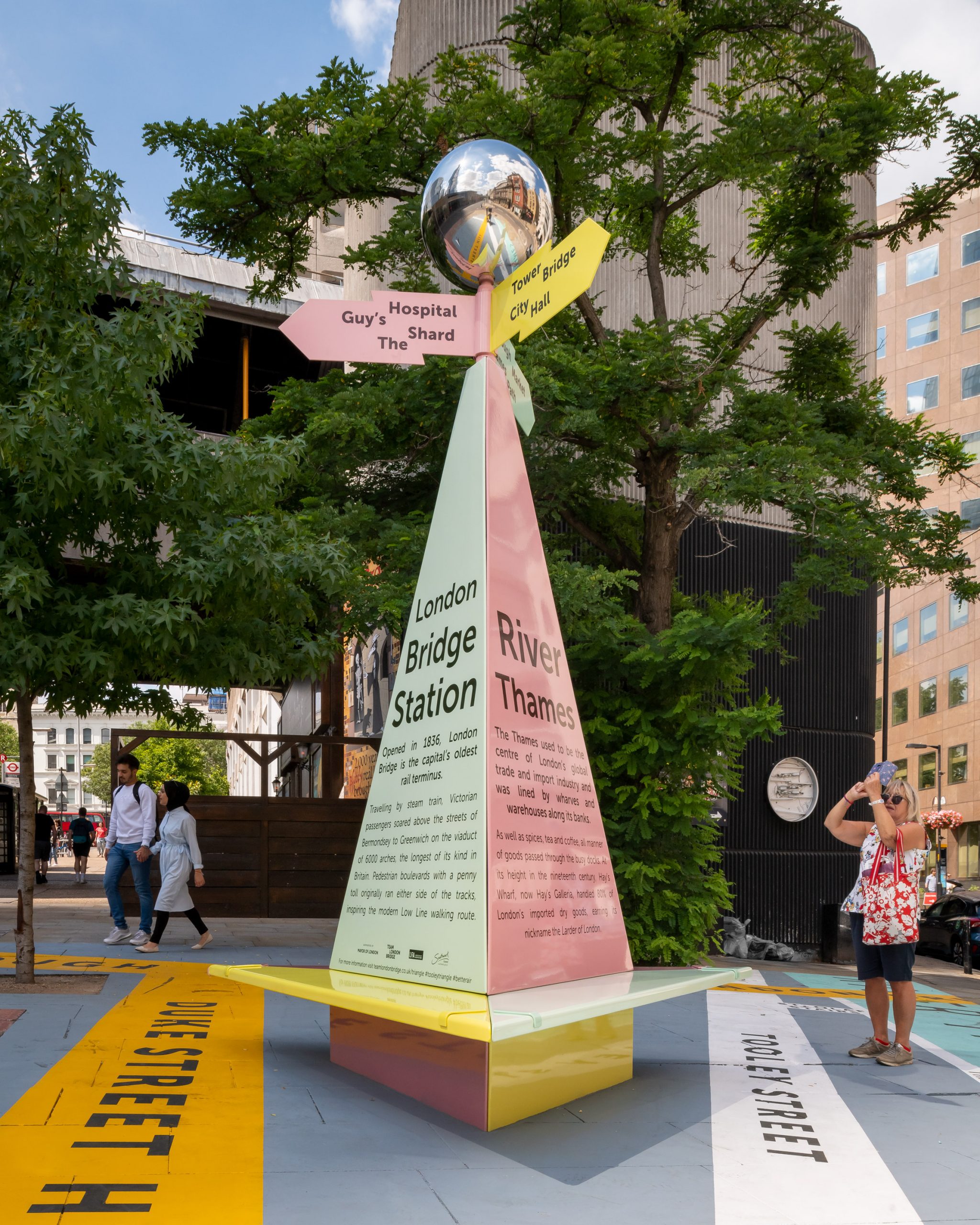 The competition won by Charles Holland Architects aimed to transform “a busy but dull traffic island” positioned opposite the main entrance to London Bridge station.

The signpost has a pyramidal structure coloured with pastel shades of pink, yellow and mint, and is topped with a reflective mirrorball. 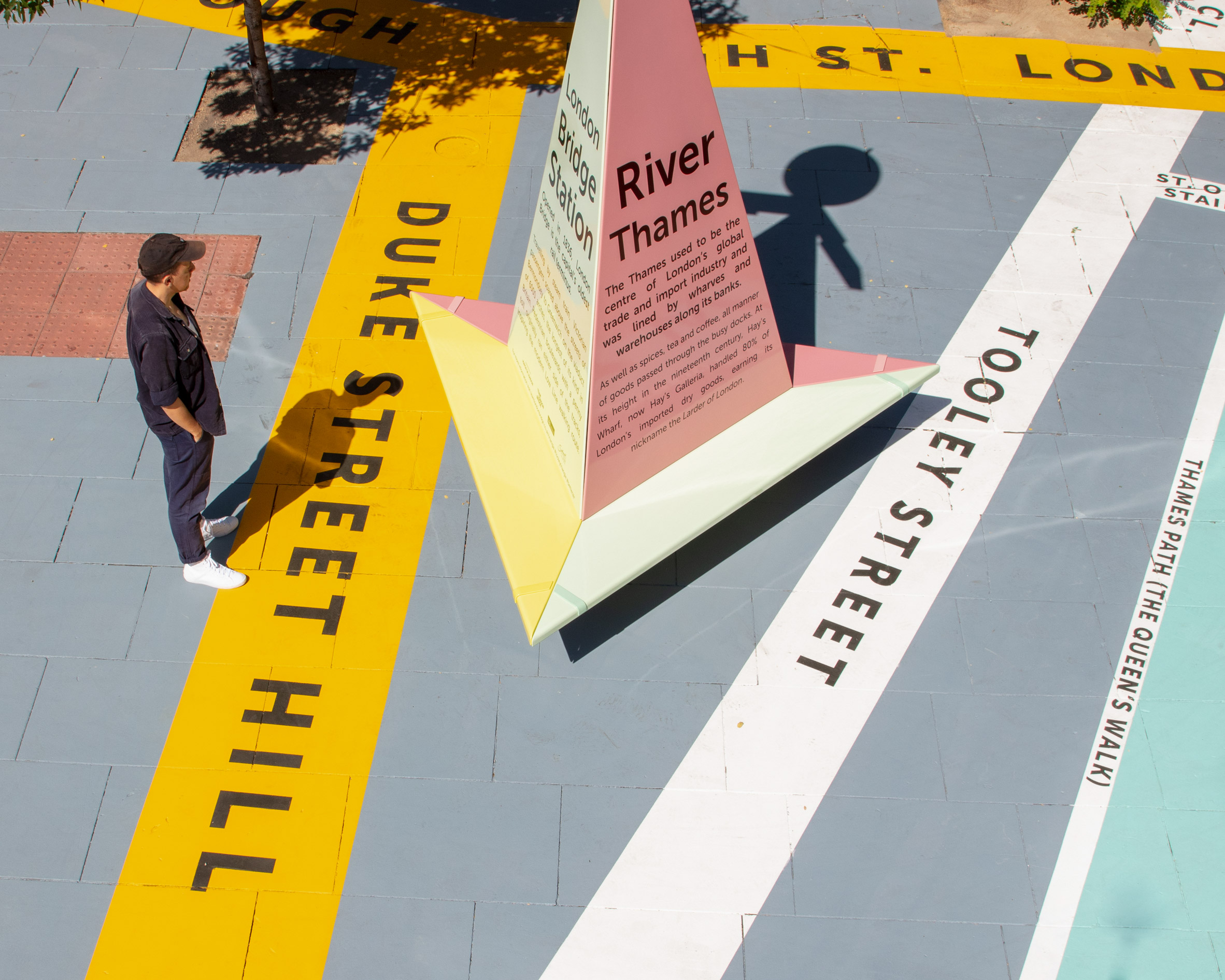 The Tooley Street Triangle also features a life-size map of the London Bridge area, painted onto the pavement in the form of brightly coloured lines that point in the direction of the location the follower intends to reach.

While these lines are printed with street names and famous landmarks – such as the river, Tower Bridge and Borough Market – the signpost itself is also printed with local directions and useful information.

A bench also surrounds the bottom perimeter of the pyramidal post, which passers-by can sit on to take a break from walking. 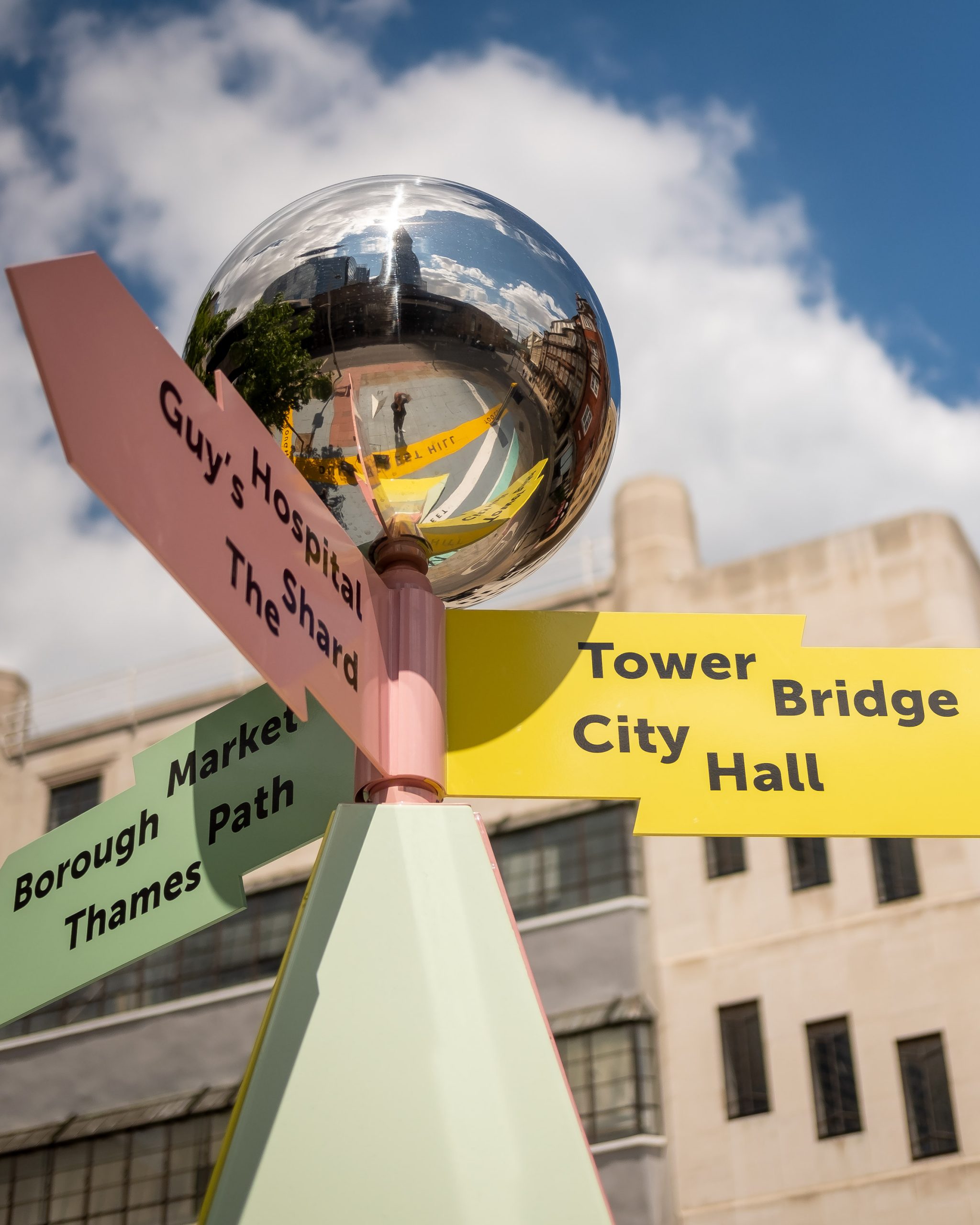 “The beacon and the map are intended as playful and enjoyable additions to the streetscape that will improve legibility and give identity to this small but important part of the public realm,” said Charles Holland Architects founder Charles Holland.

This structure also works to draw people away from the busier main roads by signposting quieter routes away from noise and pollution.

An alternative route to Guy’s Hospital, for instance, reduces pollution exposure by around 50 per cent, according to the organisers. 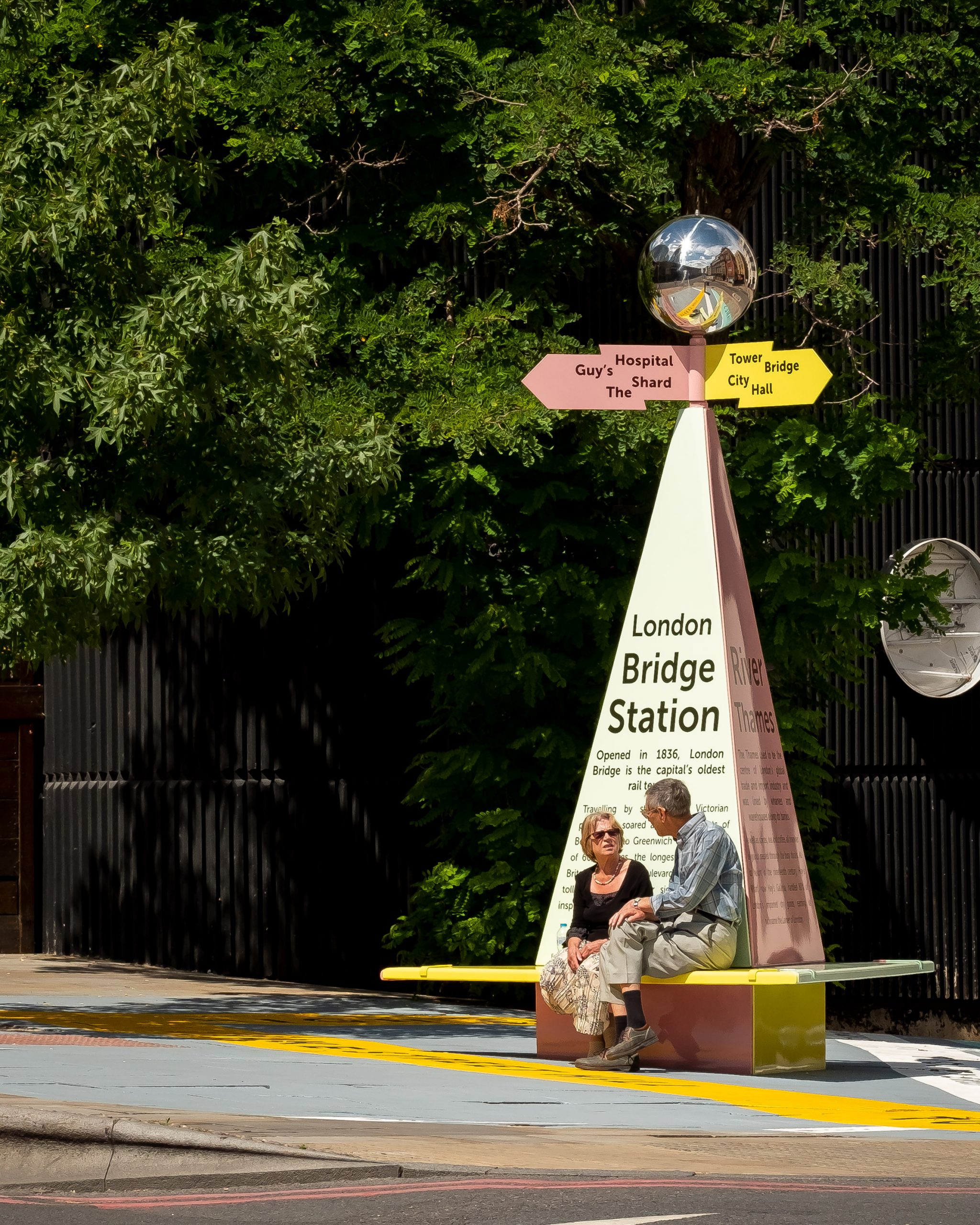 The Tooley Street Triangle was scheduled to be installed earlier this year in April, but was postponed due to Covid-19 restrictions.

“The unveiling of The Tooley Street Triangle could not have come at a better time,” said Tamsie Thomson, director of the LFA. “While so many of us are looking forward to getting to know London again, we won’t be getting lost outside London Bridge station any more.”

“I’m delighted that people are beginning to enjoy London’s buildings, streets and spaces once again, and Charles Holland Architects’ joyful and quirky installation captures London’s spirit of welcome and creativity,” she added. 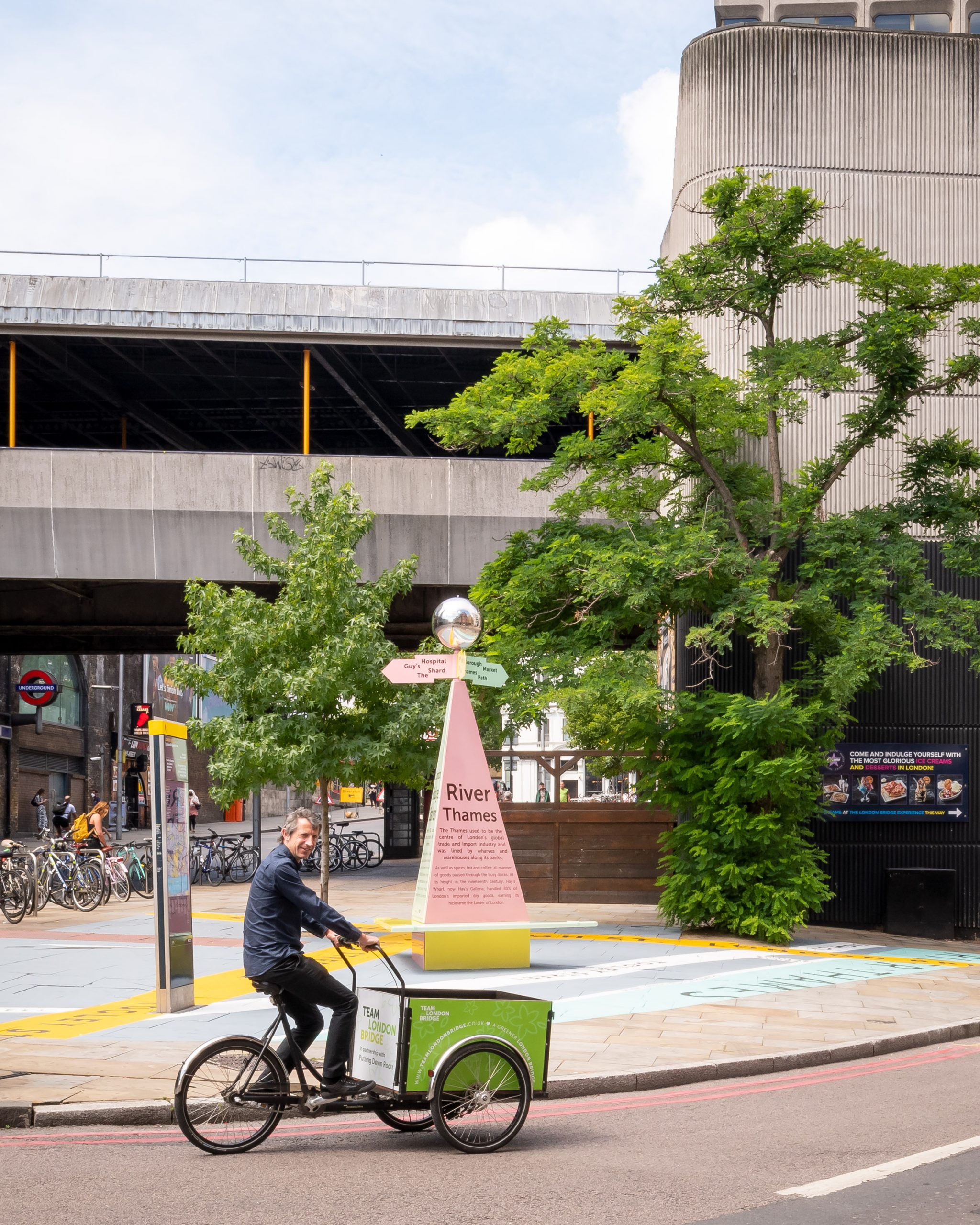 The wayfinding structure is the latest in a series of public realm improvements curated by the LFA that are released all-year-round, and are created as responses to open-call design competitions that aim to showcase creative talent.

Upcoming installations include a large public art piece located near St Paul’s Cathedral, produced by the LFA in partnership with the Cheapside Business Alliance and the City of London Corporation. 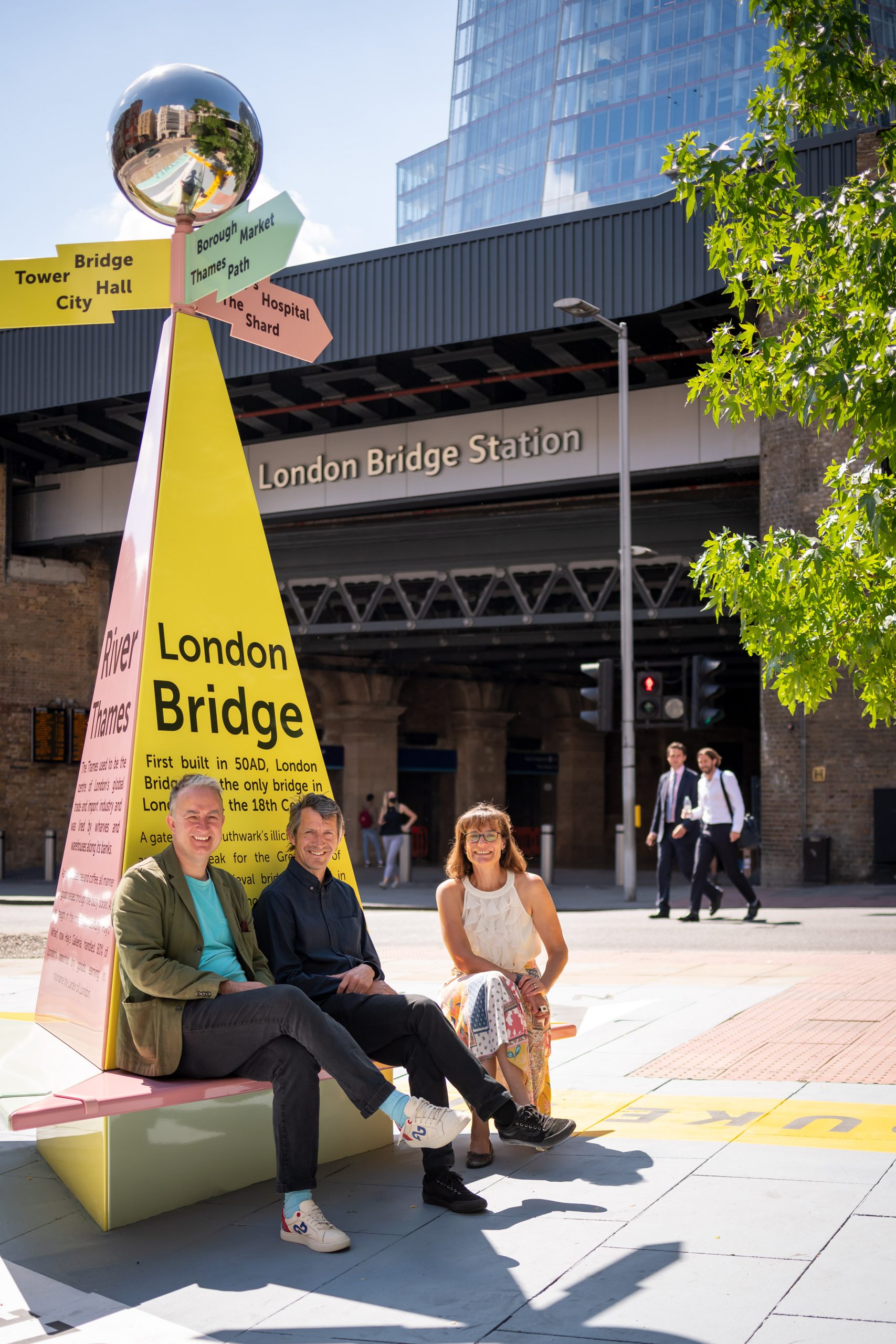 For the London Festival of Architecture’s series titled Manifestos: Architecture for a New Generation, Siufan Adey and Thomas Aquilina from architecture collective Afterparti explained the work they are doing to make the future of architecture more inclusive and transdisciplinary.

Afterparti, which was born out of the New Architecture Writers (NAW) programme for emerging BAME writers, creates zines – non-commercial magazines – and events that promote underrepresented voices in architecture and design.

A selection of the Manifestos: Architecture for a New Generation series was broadcasted on Dezeen as part of Virtual Design Festival.