Some experts are calling the new simplified lending rules a huge economic game changer which will deliver benefits for everyone, but I wonder if they could be more spin than win.

It sounds fantastic in theory – a debt led recovery, with relaxed lending restrictions freeing up huge amounts of credit and supercharging our economy back into growth.

In practice, however, the change from “responsible lending” to “responsible borrowing” won’t encourage banks and other finance providers to throw open their vaults, nor do they give us any incentive to race out and apply for more credit.

People don’t borrow more to get out of trouble, they spend less

Unless there is a bright light at the end of the debt tunnel, people faced with financial hardship tend to tighten their purse strings and spend less, not borrow to spend more.

Here’s a graphic example of how this works.

In a recent estimates hearing, the head of the National Bushfire Relief Agency, Andrew Colvin stated that only five (5) applications for concessional loans had been approved to bushfire affected small businesses.

The government’s notion that people would borrow to get out of trouble was badly misjudged.

Many business owners simply decided that increasing their levels of debt would make it harder for them to recover, not easier.

So, the assumption that people will race out and apply for housing finance, personal loans, increase their credit card limits or take out payday loans as a pathway to financial recovery is flawed, as it is the very last thing most people will actually decide to do.

But. Even if some of us have such plans, there’s a much bigger obstacle.

Even before we apply for a loan, finance providers already know our debt capacity and ability to make repayments.

The finance providers know all about us anyway

Over the past few years, the government has been quietly implementing what they call Comprehensive Credit Reporting (CCR), which requires finance providers to report our credit history and repayment performance back to credit bureaus so that they can share this information with other lenders.

Previously, credit bureaus only listed application busting information such as defaults and bankruptcies on your credit report. 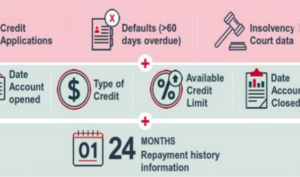 Under CCR your report shows all your past credit applications, amounts applied for, loans declined and approved credit limits.

Plus, CCR exposes your repayment history, which must be provided by lenders to credit bureaus, along with default agreements and any deferrals you have applied for, such as those under current repayment moratoriums.

These new reporting rules mean that finance providers will know much more about you than your credit rating when you apply for your next mortgage, personal loan, credit card or payday loan – your CCR lays bare your current debt position, your repayment history and your capacity to repay any further loans.

So, finance providers don’t have to take your word about how little you spend on Uber Eats, Netflix, or your capacity to repay more debt.

No matter what you assure them in your loan applications, they already know everything they need to approve or deny you further finance.

That’s why any suggestions that these new simplified lending rules will lead to a debt driven recovery are more spin than win.