Czech firm Studio 519 has designed a plywood module called Nestbox, which fits neatly into the boot of a car and can be expanded into a double bed and fully fitted kitchen for camping.

The unit, created for local company Egoé, comes in four sizes to suit a range of cars and can be customised with modules such as a cooker, mini-fridge, sink and camping shower attachment. 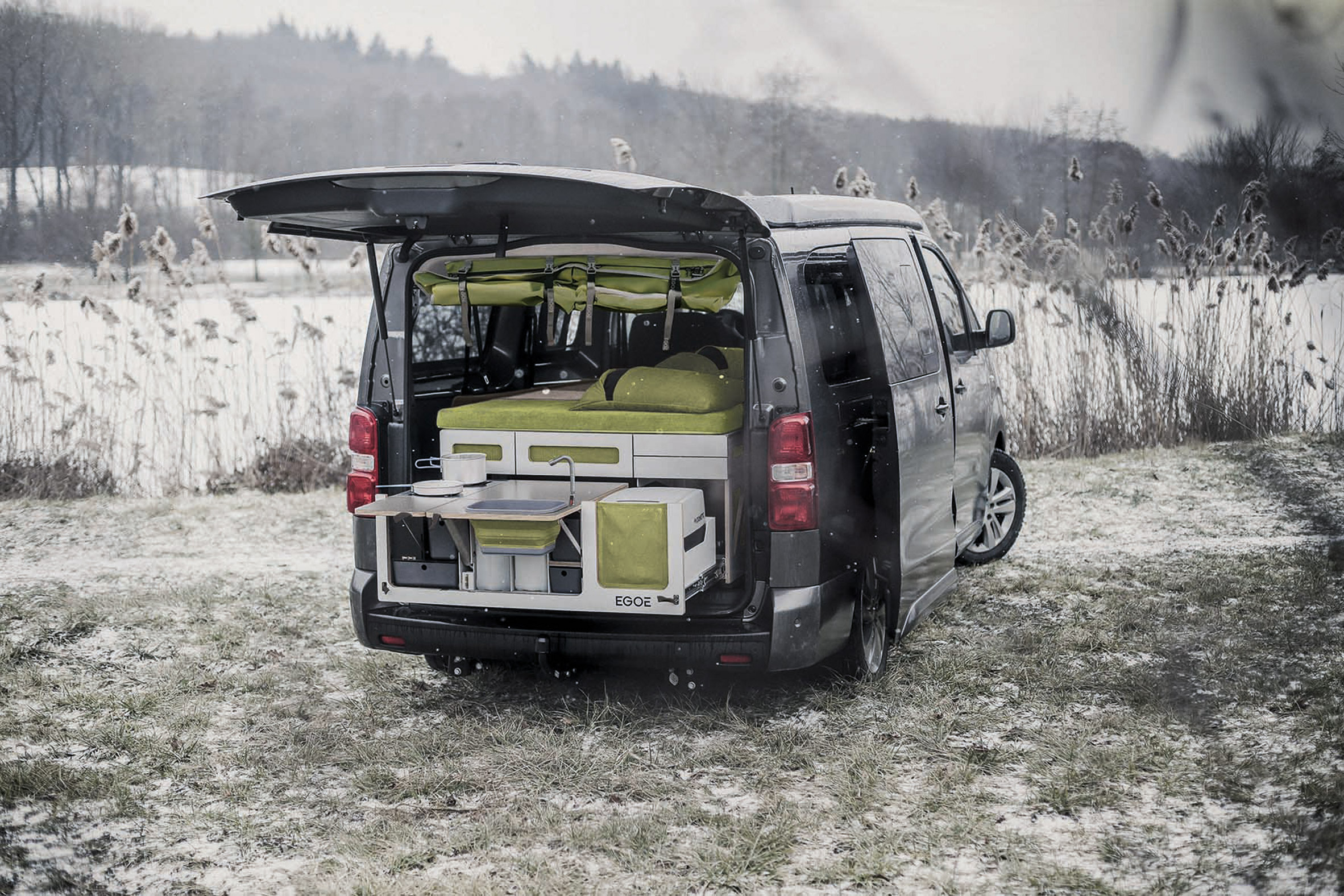 During transport these different elements are neatly compacted into a steel-backed mainframe which, at its largest, measures just over one metre long and half a metre wide and tall.

But on arrival, a system of integrated, space-saving drawers and fold-away attachments allow the Nestbox to be turned into a complete sleeping and cooking set-up in a matter of minutes. 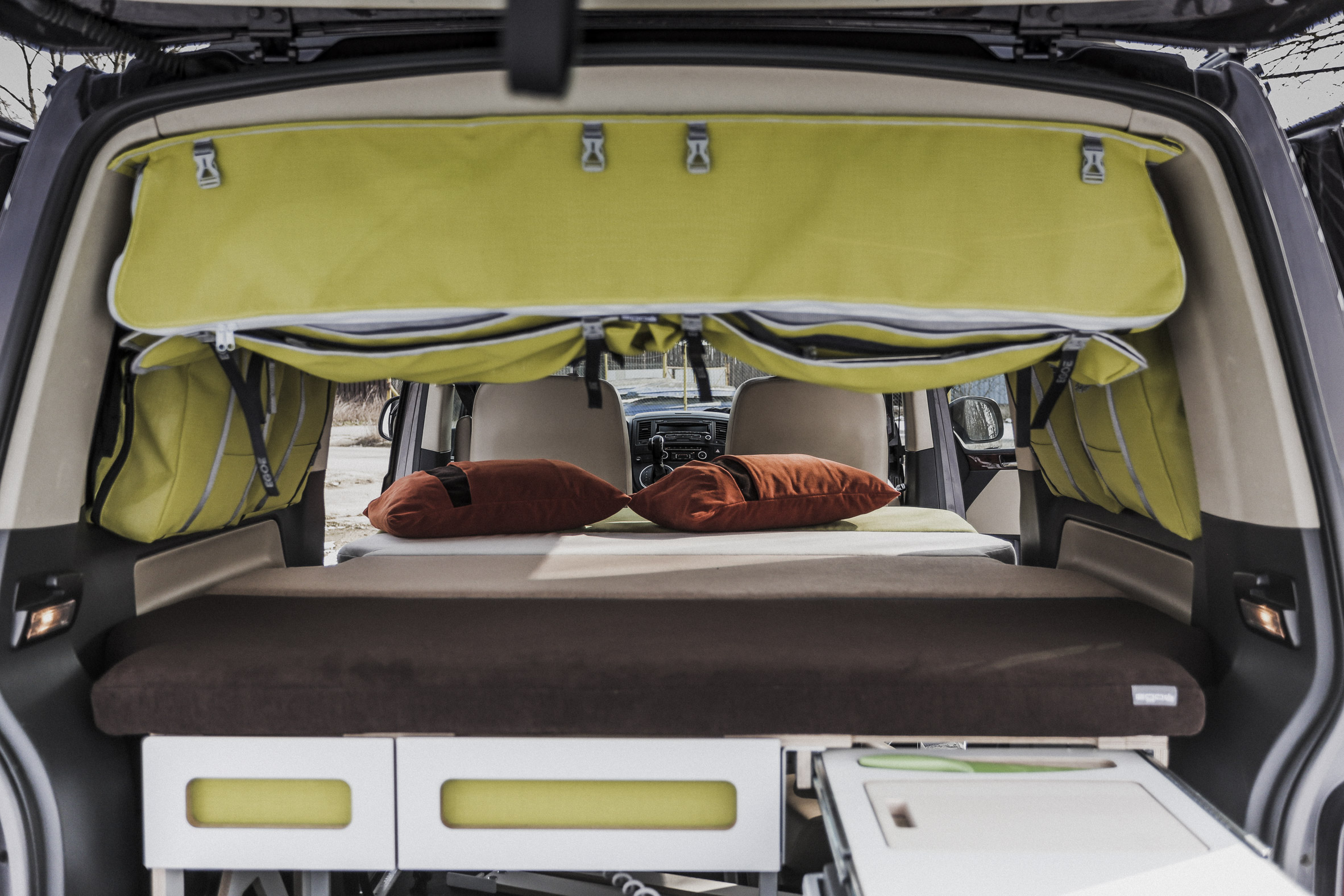 “Our main goal was to achieve a similar level of comfort to a motorhome within the confines of a van,” said the head of Studio 519, Richard Vodička.

“We happily gave up the convenience of a flush toilet, which you get in a camper, in favour of more freedom when travelling.

By expanding the possibilities of a regular van you facilitate a way of travelling that is far richer in experiences. It allows you to slow down your life and get closer to nature.”

To set up the bed, a panel of slats that is folded away on top of the mainframe during transit can be unfurled over the car’s collapsed back seats and finished off with a foldable mattress.

Meanwhile, the kitchen is condensed into one large drawer, which can be pulled out from the trunk to provide counter space and access to the cooker and mini-fridge. 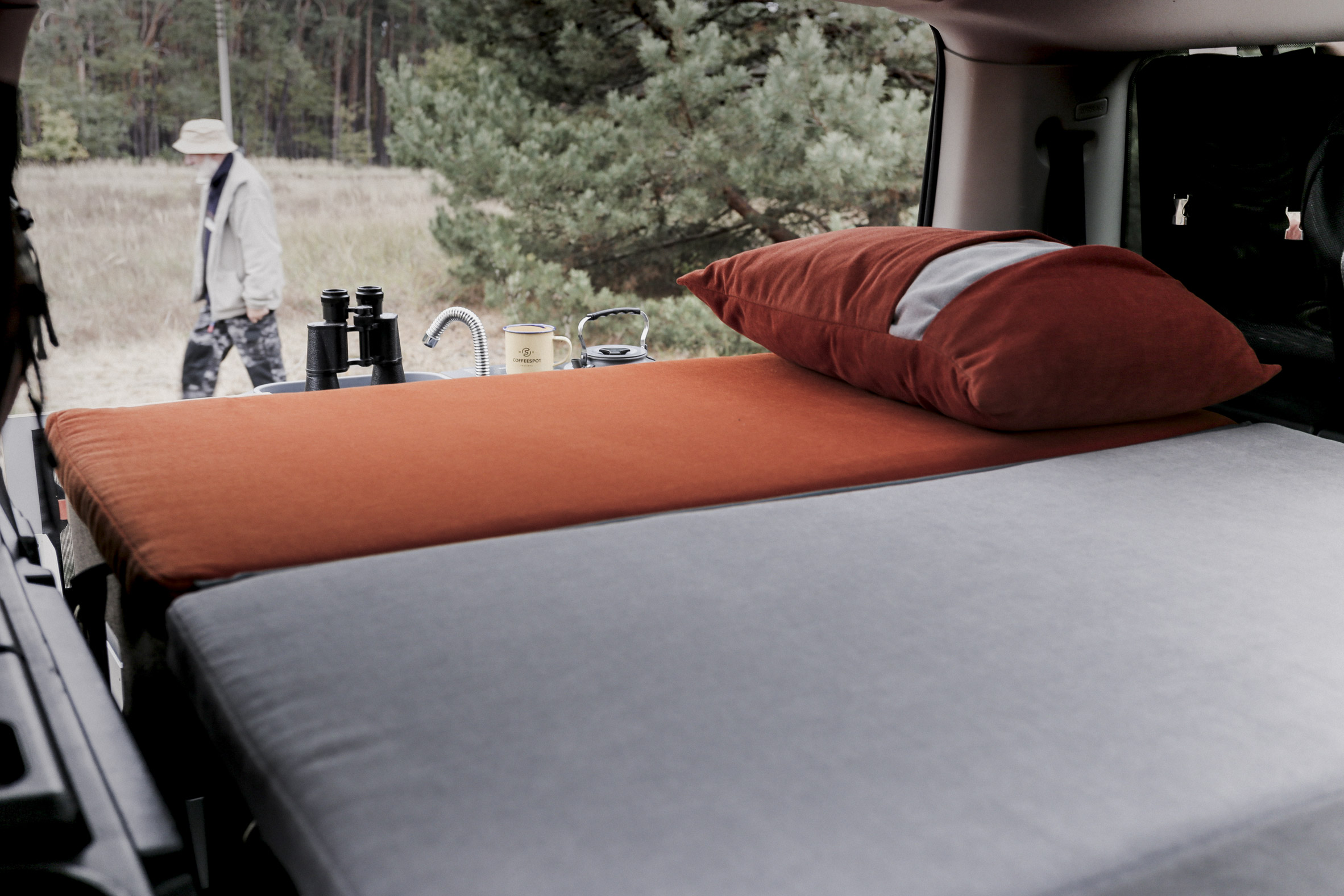 The sink is collapsable and integrated into a drop-leaf panel that can be stowed away while not in use.

A range of smaller drawers was specifically designed to store kitchen equipment while on the road, with designated slots carved out of the wood to hold knives and cutting boards. 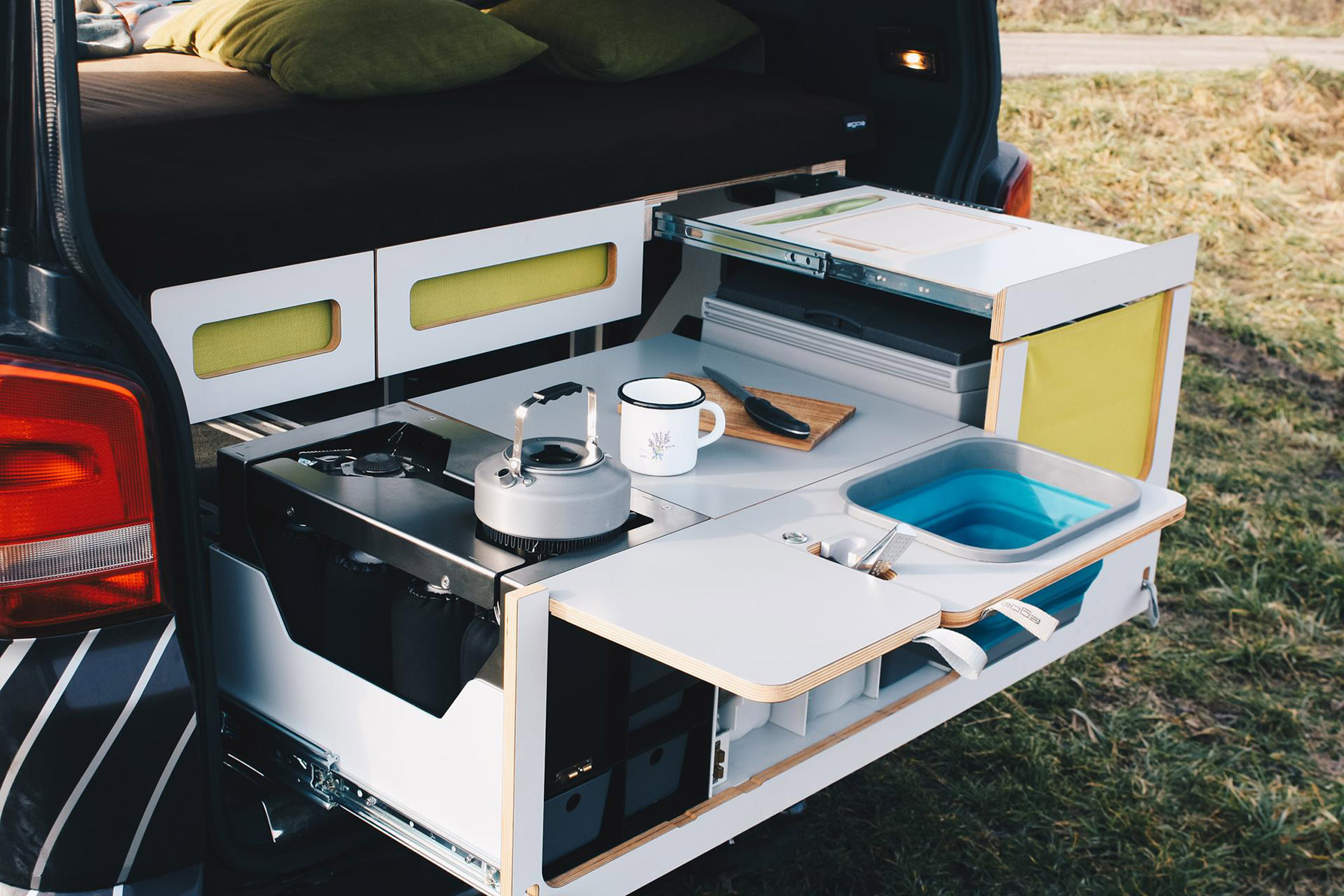 Locally sourced birch plywood is used liberally throughout the design to create a sense of warmth and bring nature into the interior of the car.

“The materials and the colour scheme stand in contrast to classic automotive aesthetics and are more likely to evoke a sense of home,” said Vodička. 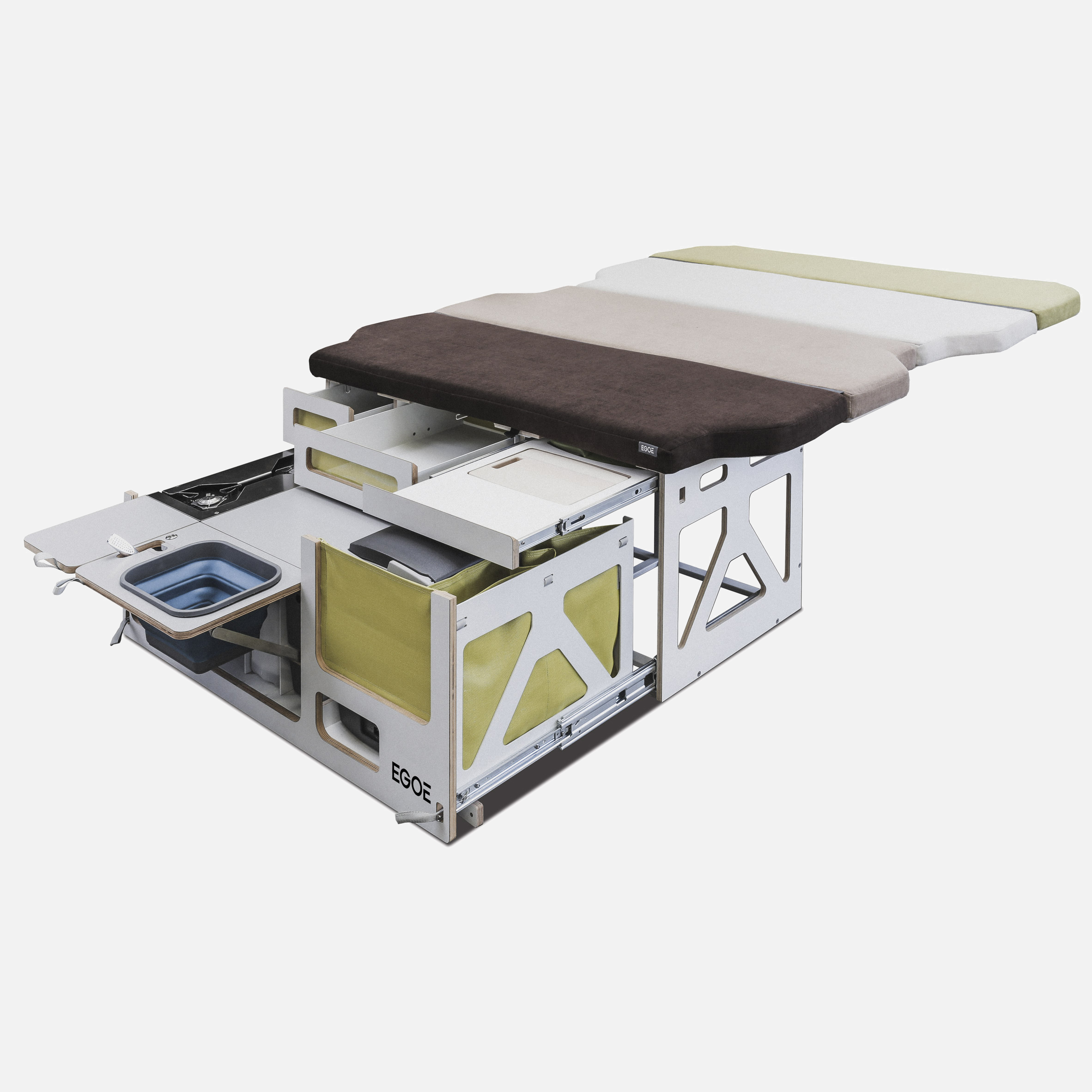 “Except for the folding washbasin, everything is locally sourced and made in the Czech village of Bílovice or its surrounding area,” Vodička continued.

“The designers and the people who manufacture the kits work on the same grounds. This kind of immediate feedback is very important for us.”

Vodička hopes that Nestbox can offer alternative modes of travel and a renewed sense of agency to holidaymakers, who were left in the cold by the Covid-19 travel restrictions.

“We are in the middle of a mindset shift right now,” he said.

“Global travel restrictions have caused people to rethink what they expect from their vacations and their leisure time. Nestbox is able to give its users a sense of privacy, security and most importantly freedom.” 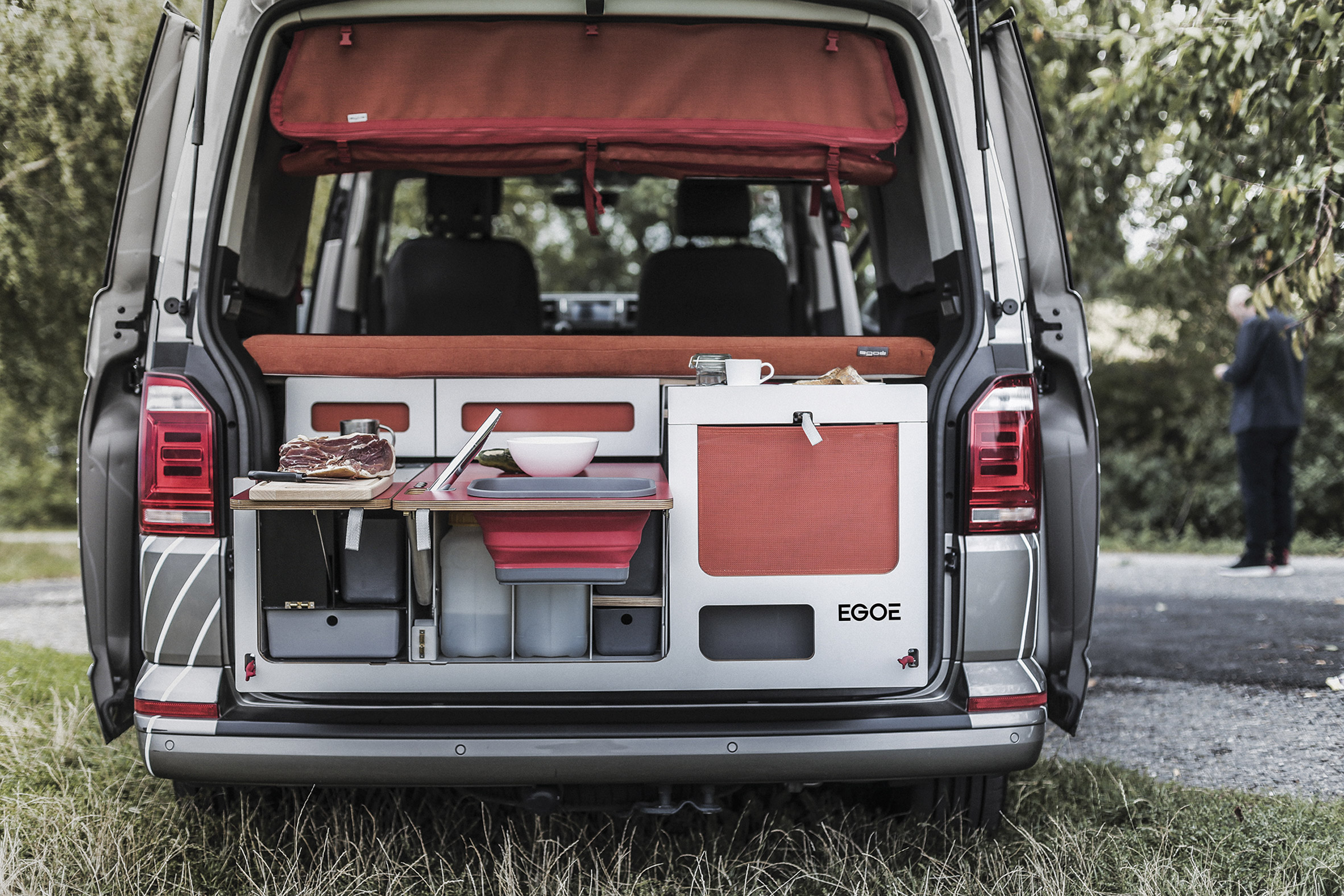 Elsewhere, designers have started to ponder how we can make traditional modes of transport safer in a post-pandemic world, with PriestmanGoode sharing plans for how we should “future-proof” air travel and Italian architect Arturo Tedeschi and Hong Kong’s Ponti Design Studio releasing concepts for how to integrate social distancing measures into local tram systems.

The post Nestbox is a modular trunk extension that turns cars into campers appeared first on Dezeen.