Building on real histories, French designer Rip has imagined how community traditions might have developed in response to the believed presence of Bigfoot, elves and reptilian humanoids.

The project is titled That’s One Small Step for Bigfoot, One Giant Leap for Rationalists.

Rip has created three fictional cultural practices, each designed to meet the criteria of UNESCO’s Intangible Cultural Heritage list, and created objects associated with these practices.

She hopes to show how a community tradition might have value even if it is based on fiction.

“Who decides what is important?” she said. “Does something have to be true to be valuable and worth preserving?”

One culture centres around night expeditions in search of Bigfoot

Rip’s first practice is based around the myth of Bigfoot, a large creature believed to roam wild in North America.

Building on the work of real-life cryptozoologists, who search for legendary animals, she has outlined a tradition where the residents of a village between Canada and Washington State go out at night in search of the so-called yeti.

She has created two objects as artefacts of this practice.

The first are replicas of the shoes worn by real Bigfoot researcher Michael Ward in 1951, while the second is an imagined “sound monument” presented to researchers who have successfully recorded Bigfoot’s nightly growls.

Rip also imagines a practice of harvesting morning dew, to offer to elves

Rip’s second practice is based on elficology, a study of elves and fairies originally developed by French author Pierre Dubois through a series of encyclopedias published in the 1990s.

Building on the myth that elves drink morning dew, Rip imagines that a community might develop a practice for harvesting this dew themselves so that they can make offerings to the elves.

She has created linen sleeves and embroidered harnesses which would be worn by the dew collectors, allowing them to carry out their work through a form of ritualistic dance.

The designer has also created ceramic vases for storing the dew, which are intricately painted with scenes and images that celebrate the collection process.

The third cultural practice builds on an ongoing conspiracy theory that suggests that reptilian creatures are disguising themselves as humans and living among us.

Rip imagines a tradition where people go down into the sewers to collect reptilian skin moults, which are used to create new objects.

To demonstrate, she has used the moults to create a skin blouse and a stained-glass-style window, and has also used it as a cast for patterned ceramics.

Rip’s aim is not to ridicule these myths, but to show how shared beliefs can have both positive and negative outcomes, building communities while also perpetuating untruths.

“[The project] brings together creative bubbles that disturb the rationality of science and history, producing stories that are as romantic as they are controversial,” explained Rip. 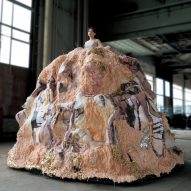 “This work echoes an increasingly connected society, where the fake sometimes seems more real than the real ‘real’, and highlights a very human paradox: our obsession with truth and our eagerness to escape from it – a paradox as healthy as it is dangerous,” she added.

Rip created the project for her masters degree at Design Academy Eindhoven, under the contextual design programme.

She presented it at the graduation show, which took place during Dutch Design Week in October.

Other projects on show included glass blown inside bread and “trauma-healing” garments.