While the plan may seem like a good idea to some, I’m not really convinced it will be as widely beneficial as many people think.

What is stamp duty?

Before we discuss the proposal and it’s benefits and hindrances, let’s first clarify what stamp duty actually is.

Stamp duty is a “one off” tax imposed by state and territory governments on certain transactions.

It can vary depending on the state or territory, and may be called stamp duty, transfer duty or general duty.

When buying a property, the purchaser genrerally must pay stamp duty on the transfers of land or property to their name.

Depending on the value of the property you’re buying you could be looking at forking out tens of thousands of dollars in stamp duty at the time of settlement, but certain concessions and exemptions may be available.

And since it’s a state-based tax it can also vary vastly from state-to-state depending on both the purchase price and what you are purchasing.

What is the NSW government proposing to do?

According to CoreLogic data, the median house price for Sydney is $993,927, which means a buyer would need to pay a $40,065 upfront stamp duty on their purchase.

But under the new NSW government proposal, we could see stamp duty phased out and replaced with a new tax instead.

NSW Treasurer Dominic Perrottet’s plan would see a buyer, who plans to live in the house they purchase, have the option of either paying stamp duty up front or a smaller annual tax on land value.

Land tax was previously only levied on investors and commercial property owners, but the new proposal would apply for all homeowners, including owner-occupiers.

How many additional people are we talking about here?

That translates to a whopping 1.68 million Australians to which the proposed government plan would apply.

As the plan is still only a proposal we don’t have all the details yet, however the NSW Government intends to “consult” concerning this proposal until March 2021. 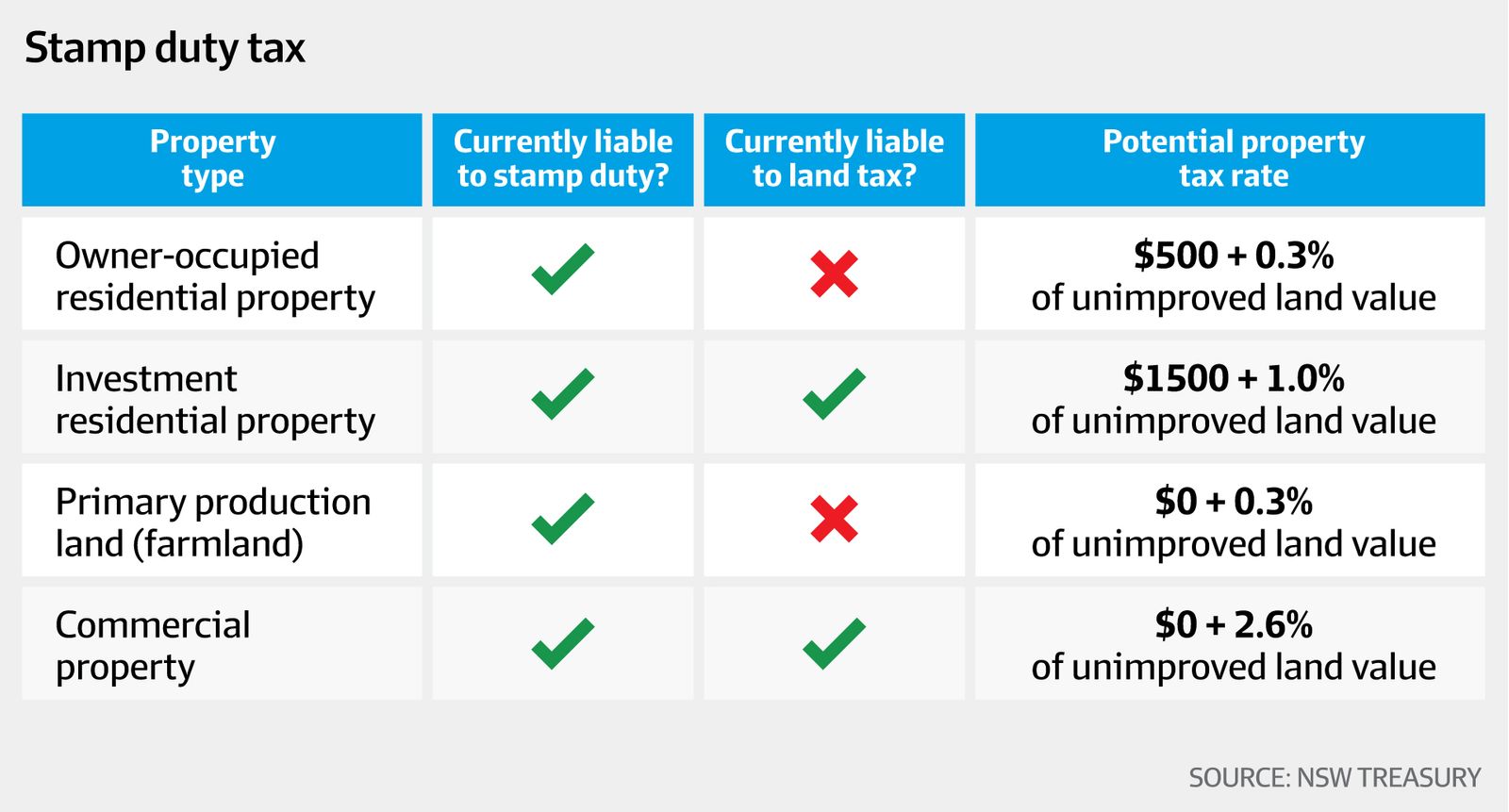 Image from the Australian Financial Review

Why is the NSW government proposing to abolish stamp duty?

On the face of it there are two reasons.

If the plan were to go ahead, he suggests the move could tempt more would-be purchasers to take the plunge and buy a property, under the guise that because they’re able to avoid the upfront lump-sum payment, they are therefore saving money.

But while it may seem tempting to abolish it, given stamp duty fees earned the NSW government around $7.4 million in the last financial year, it can’t simply disappear.

We know how government budgets work…the stamp duty income that would be lost would need to be replaced with a similar amount of income (or possibly more) from another source.

I can imagine they would be happier with an annual income of a property tax not subject to the ups and downs of the property cycle and paid by every homeowner and investor rather than the lumpy stamp duty they are currently getting.

This is particularly relevant following recent property market volatility where the government is set to earn far less income from stamp duty taxes than usual as buyers halted plans amid the coronavirus pandemic and economic downturn.

So is abolishing stamp duty in NSW a good idea?

Sure, on the surface it appears like the proposed changes could be a good idea.

But I don’t think it’s as simple as it sounds.

Not surprisingly the proposal to scrap the unpopular tax has garnered lots of interest from many so-called property experts and insiders. 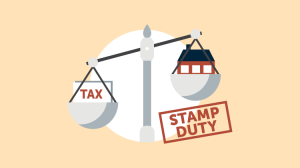 And they have very conflicting views on whether the new proposal is a good idea.

Having been around the block a couple of times, I’m wary of a plan where the government intends to replace one tax with another at a time when it’s already made clear that it requires more revenue.

Sure, the proposed changes would give the government a steady stream of income, but there seems little doubt that a property buyer would end up paying more tax in the long term.

In fact, after a decade, the amount someone could pay in land tax would most likely surpass the amount they would have coughed up if they’d opted for stamp duty in the first instance.

This means that by the time the owner has lived in the $1 million property for 15 years they would have paid $4,822 more than if they’d paid a one-off stamp duty fee. 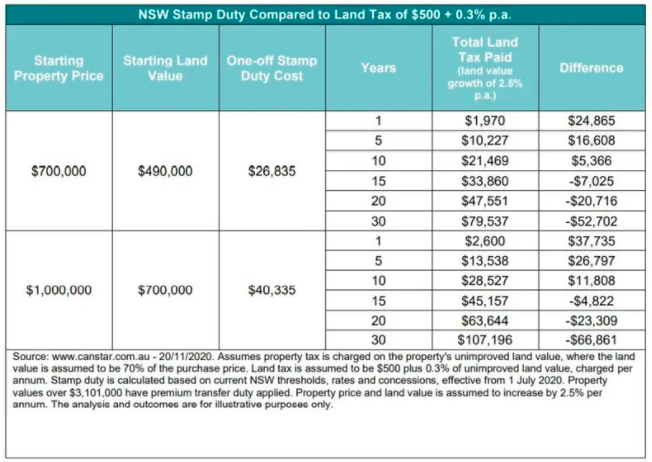 Now I can see what has driven the NSW government to make the proposal.

It would be a nice little earner for the NSW government wouldn’t it?

Maybe not so much for its property buyers and sellers, or even the market as a whole.

So while a number of industry bodies believe the proposed change is a good idea because it will enable more people to buy and sell property, I’m not so sure.

Problem one: It would put us at risk of a two-tiered market

While the full details aren’t yet available, it is possible that if a buyer opts to pay the annual property tax instead of the original stamp duty charges, and then on-sell his home, future purchasers will also be forced to pay the annual land tax on this same property.

This could create a very complicated two-tier property market where some properties would come onto the market burdened with an ongoing tax, while others would not, making some more attractive to buyers than others.

Problem two: It could create a lull in the market 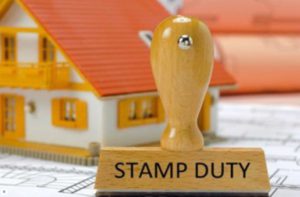 In the short-term the proposed changes could cause a lull in the market while people wait to see if they can save on stamp duty before they purchase their next home.

“Optimistically, this won’t occur until mid-next year at the earliest. Until then, we run the risk of buyers maintaining a wait-and-see approach,” he said.

Problem three: It could push property prices up in future

While a property market lull could be a short term problem, in the long term buyers would likely use their additional accumulated savings to buy a more expensive home.

When buyers have more money to spend, competition generally increases which could in turn push property values up further.

Currently, many first home buyers are already eligible for a range of incentives, including stamp duty exemption.

So while Perrottet claims his proposal would go some way to lessen the financial barrier inhibiting some buyers to purchase a new home, it’s unlikely to help first home buyers into the market at all.

And isn’t that part of the problem with our housing market? Inaccessibility for new first-time buyers?

Unless there is a lot more devil in the detail that we’re not yet aware of, I’m not convinced the proposed abolishing of NSW stamp duty will really benefit any of us.

If you’re wondering what’s ahead for property you are not alone.

In “interesting” times like we are currently experiencing you need an advisor who takes a holistic approach to your wealth creation and that’s what you exactly what you get from the multi award winning team at Metropole.

If you’re looking at buying your next home or investment property here’s 4 ways we can help you: