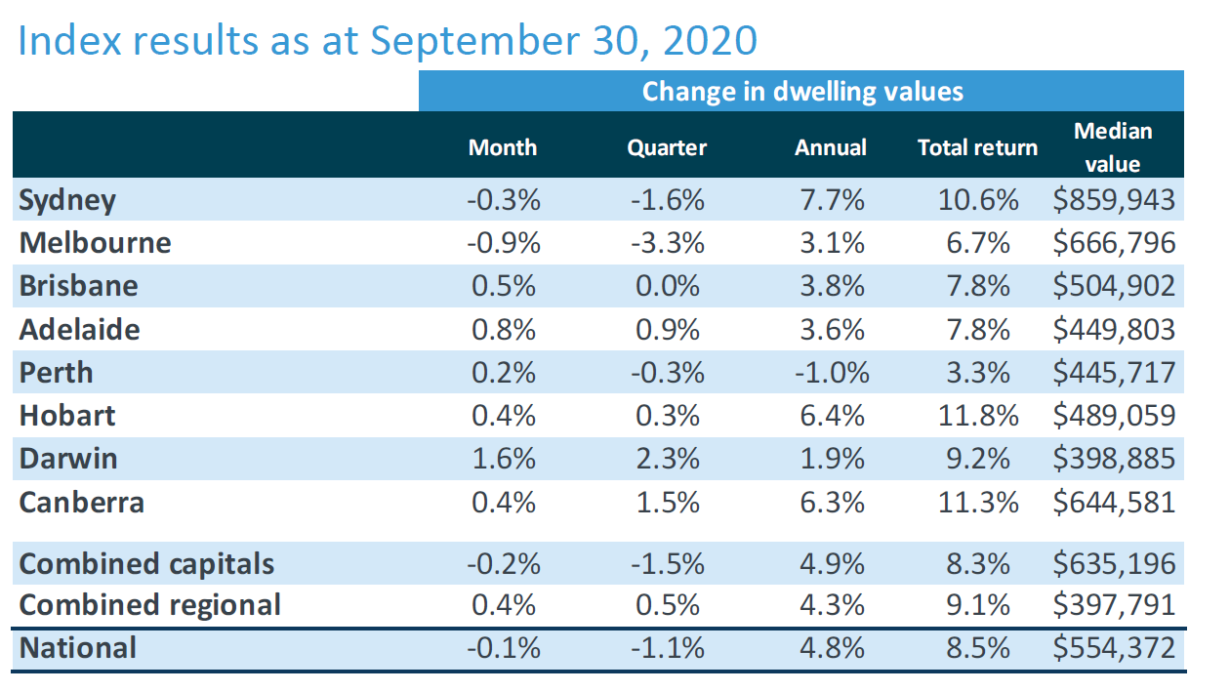 Melbourne remains the main drag on the headline results.

The rate of decline across Sydney’s market has been consistently easing since July, and the remaining capital cities have all returned to some level of growth.

Regional markets have continued to out-perform relative to the capital cities.

In September, every ‘rest of state’ region, except Western Australia, recorded a lift in housing values.

The resilience in regional values can be attributed to a number of factors.

From a cyclical perspective, regional areas weren’t recording the same growth conditions pre-COVID, so home values in these markets are often more affordable, and don’t have a high base to fall from.

Anecdotally we are also observing a transition of demand away from the cities towards the major regional centres, particularly those that are adjacent to the larger capitals where residents can commute back to the cities if required.

Remote working arrangements are no doubt a factor in supporting demand in these markets, but lifestyle opportunities and a desire for lower density housing options are also playing a part.

The housing market outlook is subject to headwinds as fiscal support is reduced, labour markets remain weak and mortgage payment deferrals become less common. However, there are a number of factors that are supporting improved housing market conditions.

The aggregate effect of low mortgage rates, and the prospect that rates could fall further, low inventory levels, government incentives and improving consumer sentiment seems to be outweighing the negative economic shock brought about by the pandemic.

Such tight inventory levels at a time when demand is recovering is creating some urgency in the market. 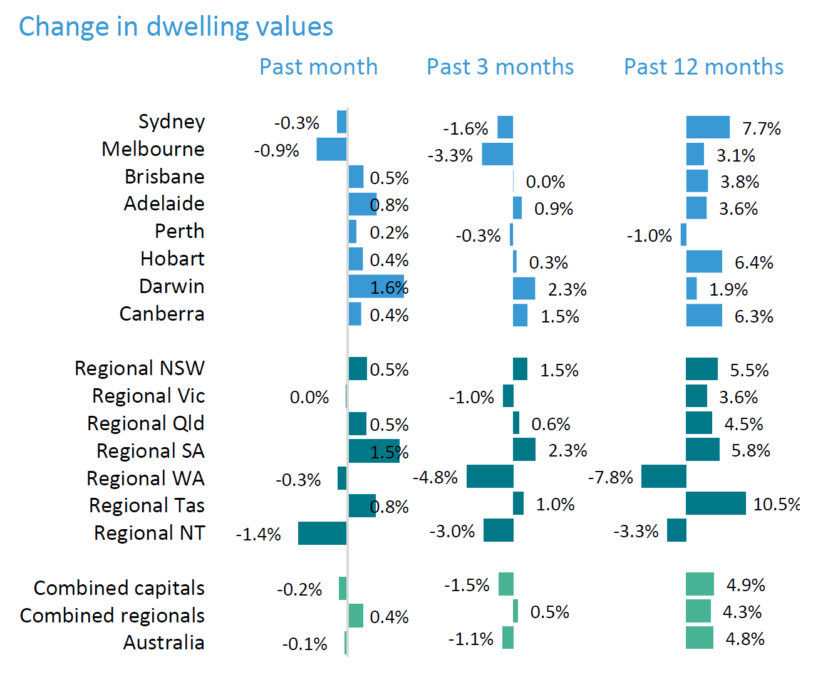 The imbalance between available supply and housing demand is one of the reasons why housing values have hardly fallen through the COVID period so far, and helps to explain the recent upwards trend in values across some cities.

We aren’t seeing any signs of a rise in distressed listings or stock starting to pile up in the market.

In fact, the opposite seems to be true, where new listings are being absorbed by the market faster than the rate at which they are being added.

This trend will be important to monitor over coming months as fiscal support tapers and the financial situation of borrowers taking a repayment holiday is assessed by their lender.

A rise in urgent or distressed listings would provide a further test for the resilience of housing values.

Estimates of sales activity have recently edged lower since rebounding between May and July.

This is largely a consequence of restrictions across the Victorian market but also fragile sentiment in other regions, low advertised supply levels, and seasonal factors. 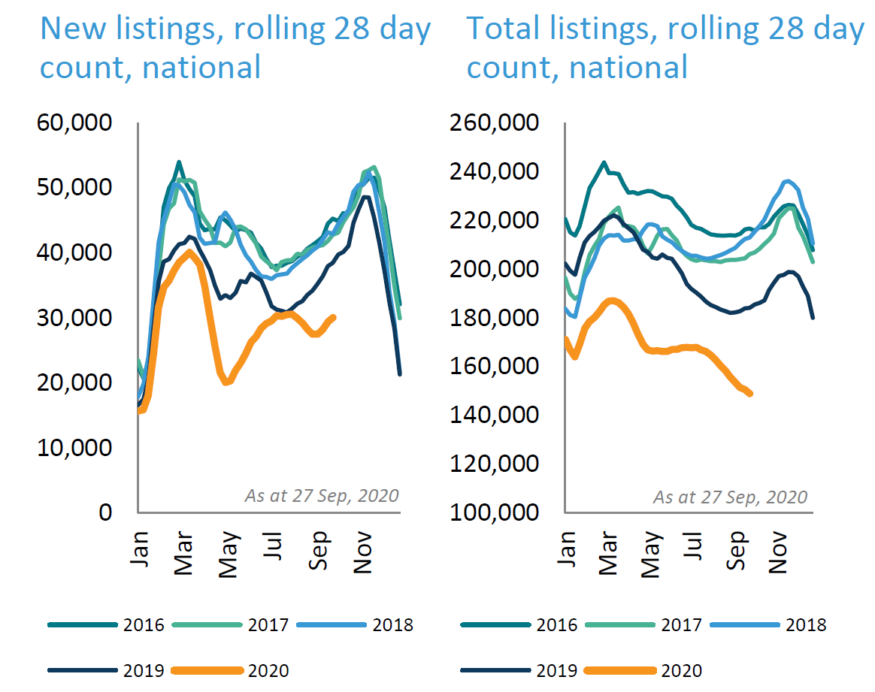 Due to the extremely low number of Melbourne auctions held, the impact on the combined capital cities reading has been negligible.

The weaker performance across the larger cities, where housing values are typically higher, helps to explain the underperformance of the upper quartile, however, it is clear that lower value cohorts of the market are performing better in Sydney and Melbourne as well.

While less extreme, this trend is holding true across every other capital city.

Historically the more expensive end of the housing market has led both the upswing and the downturn cycles, however this trend could be disrupted due to the over representation of first home buyers in the market who tend to focus on properties around the middle to lower end of the value spectrum.

The performance of the rental market has diverged substantially between house and unit rents. 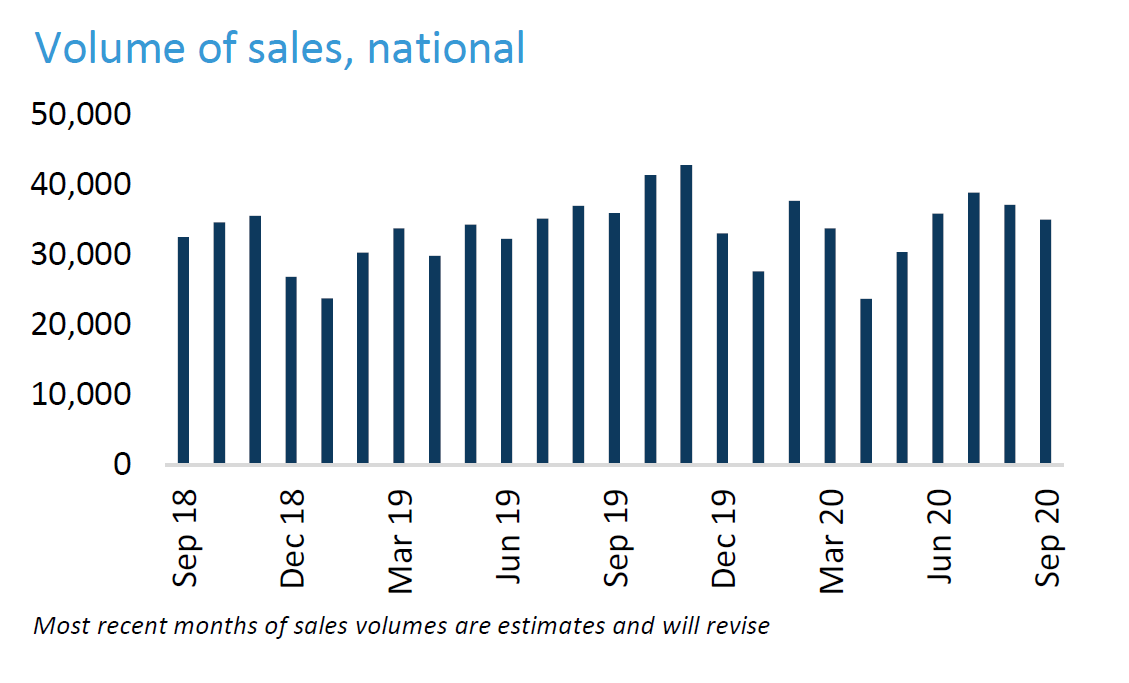 The significant difference in rental performance is a combination of supply and demand side factors.

Investment-grade apartment markets have seen significant supply additions over the past decade, with a large portion of new apartments built in Sydney and Melbourne.

The supply side has been further impacted by short term rentals transitioning to long term rentals. While supply has surged, COVID-19 brought about a significant demand shock from international and state border closures.

Overseas migrants comprised a material component of tenant demand across inner Melbourne and Sydney, with many of these foreign students.

Add to this the fact that industry sectors such as food, accommodation services, the arts and recreational services have been hardest hit by job losses and lower working hours. Workers in these sectors are more likely to rent than in other industries, which has also negatively impacted rental demand. 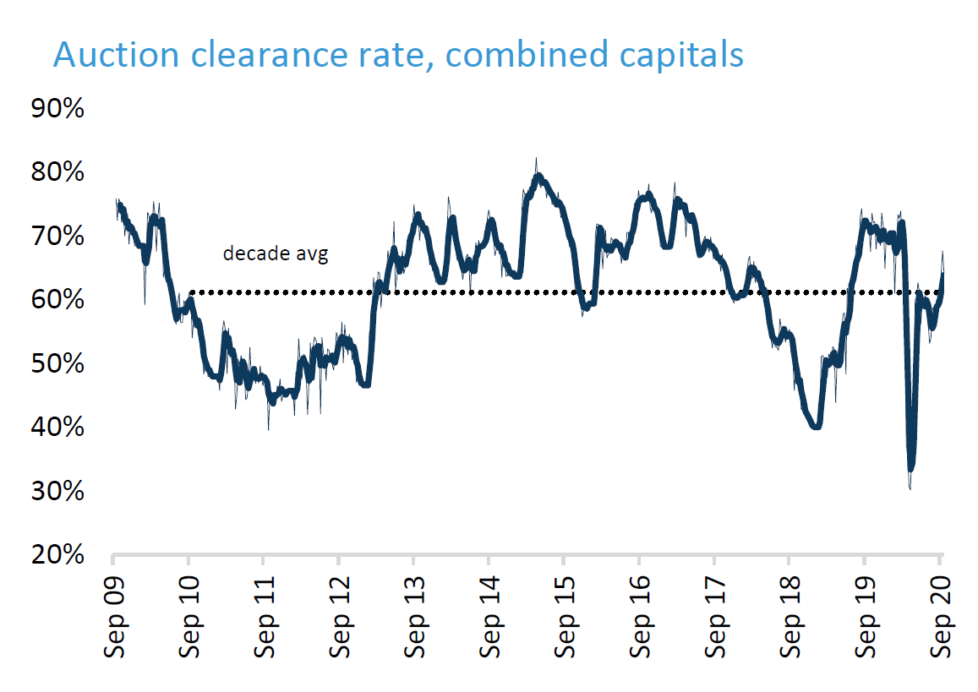 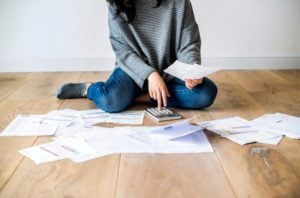 This is further evidence of the relative resilience of regional Australia throughout the pandemic. 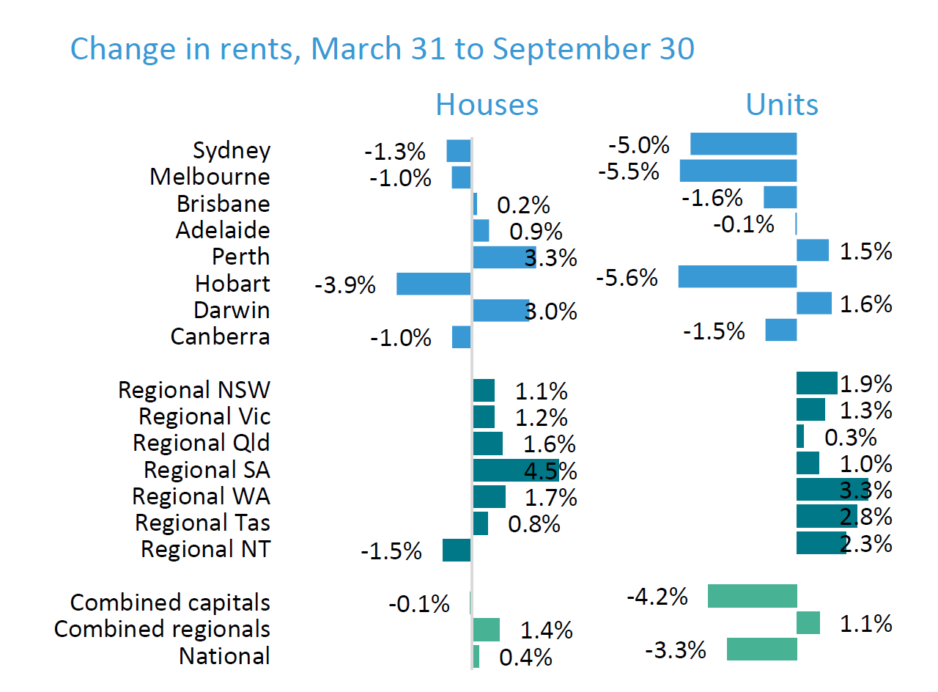 In summary, apart from Melbourne, the performance of the housing market is consistently improving.

Most of the capitals and regional areas of Australia are recording rising home values, or in Sydney’s case a reduced rate of decline.

To-date the support of low-interest rates, scarce inventory, fiscal policy initiatives, and government incentives, together with relatively successful virus containment, have insulated the housing market from larger falls in value and activity.

Unsurprisingly, the markets where the virus has been well contained and economic activity is less restricted are faring the best.

At the other end of the spectrum, the considerably weaker conditions across Melbourne provide an example of the impact of severe restrictions related to a virus breakout.

Looking forward, the market will be contending with a mixture of headwinds and tailwinds.

Headwinds will be evident as fiscal support winds down and distressed borrowers come to terms with their repayment commitments.

It is logical to assume there will be a rise in urgent or distressed listings over the coming months, however, so far we have seen new listings rapidly absorbed by the market.

On the upside, we are expecting a new round of government spending initiatives and stimulus measures to be announced on budget night next week.

These policies are likely to be aimed at supporting jobs growth and consumption, incentivising business investment, and productivity improvements.

Some potential initiatives may include a substantial lift in infrastructure spending, bringing forward income tax cuts, extending incentives for residential construction and more funding for social and community housing.

If enacted we could see credit flows become more streamlined and available by early March next year.

Credit availability has historically shown a close relationship with activity in the housing sector.