The pace of capital gains across Australian housing markets has been close to record breaking, with the national growth rate in March the fastest since 1988.

Such exuberant conditions have been driven by a multitude of factors including record low mortgage rates, a stunning surge in consumer confidence as the economic recovery beats expectations, a range of additional stimulus measures which have incentivised home buying and building, and persistently low advertised inventory levels which has created a renewed sense of FOMO amongst buyers.

But… there are some early signs the exuberance in the housing market may be peaking.

This isn’t to say housing values are about reverse; a more likely scenario is the housing market is moving through a peak rate of growth and the pace of capital gains will gradually taper over coming months.

The first clear sign of a slowing in the pace of growth comes from CoreLogic’s daily reading of home values.

The daily update of CoreLogic’s benchmark measure of housing values, the hedonic Home Value Index, is showing a clear and broad based slowdown in the rate of housing value growth; a trend that has been evident since late March. 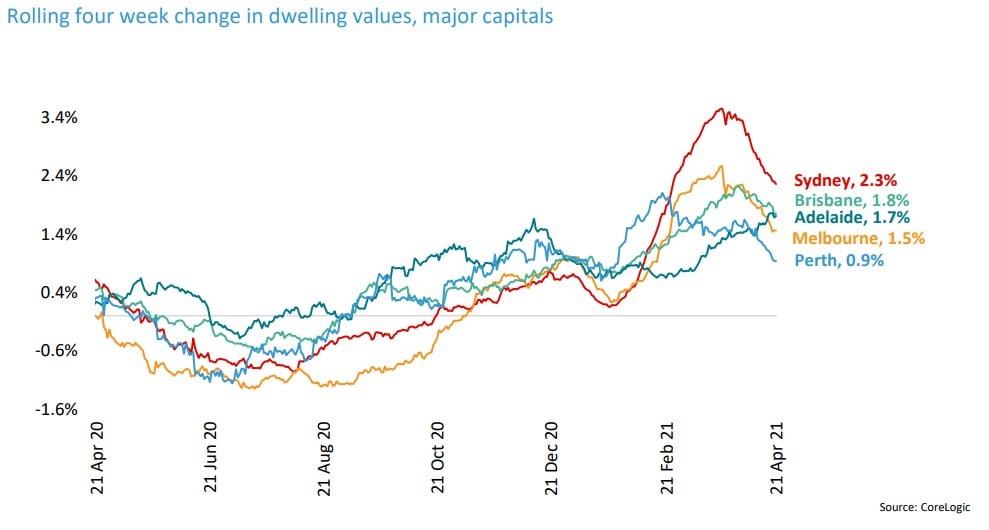 The weighted average clearance rate moved through a recent high in the last week of March at 83.1%, and has since drifted lower to reach 78.6% over the week ending April 18th.

Historically there has been a strong positive correlation between auction clearance rates and the pace of appreciation in housing values.

A rise in vendor activity

Recently there has also been a marked lift in new listings coming to the market relative to prior years as more vendors take advantage of the strong selling conditions.

The four weeks ending April 18th saw 26,470 newly advertised capital city properties added to the market which was the largest number of new listings for this time of the year since 2016 and 17% above the five year average.

Total advertised stock levels (ie new listings plus re-listings) remain low, tracking -17.5% below the five year average, which implies buyers are still likely to feel some urgency, but the lift in stock additions should gradually support a rebalancing between buyers and sellers, especially if buyer activity slows as new supply levels lift.

A lift in new housing supply

Along with more new advertised stock coming on the market, there has also been a significant lift in housing construction activity that will gradually add to overall supply levels.

Approvals for new dwelling construction are at record highs, and dwelling commencements over the December quarter were almost 20% higher than a year earlier and 5.5% above the decade average.

The surge in new building activity is skewed towards houses rather than units, however the larger cities are still showing a unit supply overhang, with 46,166 units under construction across NSW over the December quarter last year and 43,032 under construction in Victoria.

The unprecedented pipeline of new housing supply will take some time to work through to completions, however it is occurring at a time when demand from population growth has recently turned negative which could progressively create an imbalance between demand and supply.