The structure was designed by architect Radić, a long-time collaborator of the fashion brand, and announced Alexander McQueen’s return to physical shows following the coronavirus pandemic. It was also the brand’s first London show after a 20-year hiatus.

The show, titled London Skies, was informed by the cloud-filled skies which Alexander McQueen creative director Sarah Burton and the McQueen team see from its studio.

Structural specialist ES Global and creative agency Gainsbury&Whiting worked closely with Radić to oversee the conception and fabrication of the show space.

ES Global built a domed transparent structure that was inflated and constrained by steel cables to appear as though swelling from between its cable net.

Due to the nature of the car park’s sloped surfaces, the space was built on top of a large platform supported by a proprietary scaffolding system, which was left purposely uncovered at its sides to reveal the bones of its construction.

The physical space was constructed using a transparent panelled membrane, tied to a curving circular pipe at its base. The membrane was supported and constrained by a net of steel tensile cables that stretched between channels of the bulging membrane.

The entrance to the interior of the show space bubble was strategically placed at the rear of the rooftop location, allowing guests to walk around the space and take in panoramic views of London’s skyline. 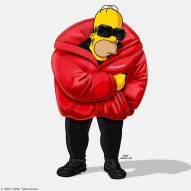 Inside, the domed, cloud-like bubble was filled with two sets of curving rows of folding wooden chairs that served as seating for the fashion show’s audience.

At the centre of the space, within a loose circle of chairs, a set of stairs rose from beneath the plywood platform where models entered the space once the show had begun.

Multiple vents located in the floor pumped air into the dome to ensure it maintained its inflated appearance, while air-locked, revolving doors controlled escaping air.

A generator located on a lower level of the car park supplied energy to the space and its functions. This was powered by hydrotreated vegetable oil (HVO), a renewable diesel alternative made from vegetable oils, grease, food waste and agricultural residues.

The show space was designed so that it can be easily taken down, transported and reused for a number of different occasions,  including education and cultural events.

Radić was also responsible for the design of McQueen’s Old Bond Street flagship store in London.

In 2020, the Chilean architect completed a house formed of two angular volumes, as well as a concrete home with three oversized skylights.