Norwegian studio Snøhetta has worked with Belgian designers Studio Plastique and Italian manufacturer Fornace Brioni to produce tiles made of glass from discarded ovens and microwaves.

Currently in the prototype stage, the Common Sands project suggests a new possible use for glass from used electronic goods, a waste material that the project team says is currently almost never recycled.

Each tile is unique because of the variance and complexity of the glass pieces. The glass carries the residue of its previous finishes and treatments, which affect its colour, composition and structure.

While this makes the glass “unrecycleable” by the waste industry, which aims for transparency and consistency, Snøhetta and its collaborators wanted to create a product that turned the glass’s so-called defects into a strength.

The architecture practice said that e-waste glass was an untapped resource that should be recycled – both because it uses less energy than producing new glass and because sand scarcity is an emerging global issue.

“In order for sand to become glass, microchips, solar cells, aerogel, insulation, or any number of other products, we enter a world of sophisticated technological production that simply defies belief,” said Snøhetta.

“However, after all the effort made to extract, transport, refine and process sand into the most complex electronic components, almost nothing is done to recycle glass, silicon, silicones, microchips or glass-ceramics when they reach the end of their lives. They simply land in the dump.”

The practice said existing EU recycling regulations are lacking when it comes to the sand-based materials integrated into electronic appliances.

“Sand is too cheap, too abundant, and too difficult to recycle,” continued Snøhetta. “However, this understanding stands in stark contrast to the geopolitical context of carbon-heavy sand mining, which is marked by both material scarcity and ecological disaster.”

Common Sands Forite is the result of three years of research from Studio Plastique, which initiated the inquiry into silicate material streams and infrastructures.

The studio brought the project to Snøhetta, which helped to further develop the product together with Italian tile manufacturer Fornace Brioni.

Forite comes in two sizes: 100×100 and 400×400 millimetres. Because of their partial translucency, the tiles could potentially be used for semi-transparent exterior walls and interior divisions.

The Forite tiles are currently made with components from ovens and microwave ovens, but the designers will also incorporate other types of e-waste glass in the future.

The team also plans to experiment with making the glass into other products, such as furniture elements and interior partitions.

Snøhetta architect Henry Stephens told Dezeen that rather than trying to standardise something that could not be standardised, it hoped to positively leverage the variability of e-waste glass into a unique product. 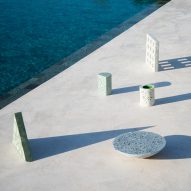 “To be honest, in the face of climate change and silicate scarcity we probably need to re-evaluate our aesthetic perceptions so they can operate outside a the business model of a typical commercial product,” he said.

“Standardisation and perfect, factory-made material finishes might be something which has to go – much like our diets, our material practice will have to become more reliant on what is locally available,” he continued. “We would hope our Forite tiles do just this – offering both a novel aesthetic and a tiny window into a more sustainable future.”

The Forite tiles are currently undergoing the standard certification process in Italy, and the Common Sands team hopes to be able to bring them to market soon after. Snøhetta plans to use the tiles in its architecture, landscape and interior projects.

Common Sands – Forite is shortlisted in the sustainable design category of the Dezeen Awards 2021, alongside innovations such as Notpla’s biodegradable packaging and The Living’s “probiotic” architectural pavilion.