From beds made out of recycled cardboard to podiums made of donated plastic, the Tokyo 2020 Olympics are aiming to be the greenest games yet.

The organisers of the Olympics are aiming to create a “minimal impact Games”, through a series of steps outlined in the Tokyo 2020 Olympic and Paralympic Games Sustainability Plan.

The majority of venues that will host events already existed with several reused from the Tokyo 1964 Olympics and podiums and medals have been made from recycled materials.

The sustainability plan claims the games are aiming to move “towards zero carbon” by “focusing on maximum energy savings and use of renewable energy”.

However, a recent peer-reviewed report has called into question the event’s green credentials and ranked it among the least sustainable Olympics of recent times. Co-author David Gogishvili told Dezeen that the efforts were “greenwashing”.

Read on for 10 design projects aiming to make the games sustainable. 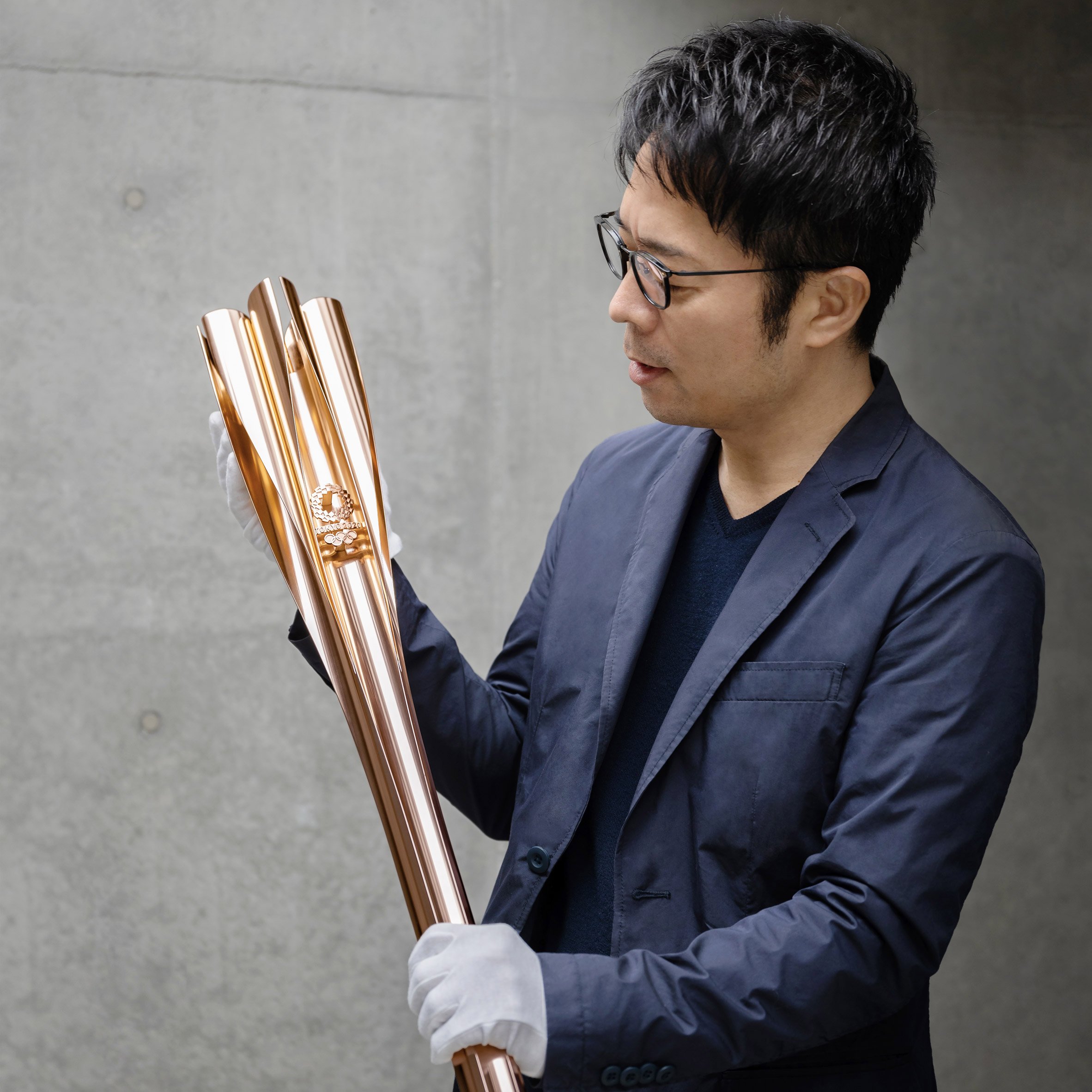 The Olympic torches, designed by Tokujin Yoshioka, were made up of recycled construction waste from temporary housing used in the aftermath of the Great East Japan earthquake and tsunami in 2011.

The designer used an extrusion technique to produce the 71-centimetre rose-gold torches, which resemble the national flower of Japan, the sakura flower. Both the relay torches and cauldron holding the Olympic flame are fueled by hydrogen instead of fossil gas.

Find out more about the Tokyo 2020 Olympics torch › 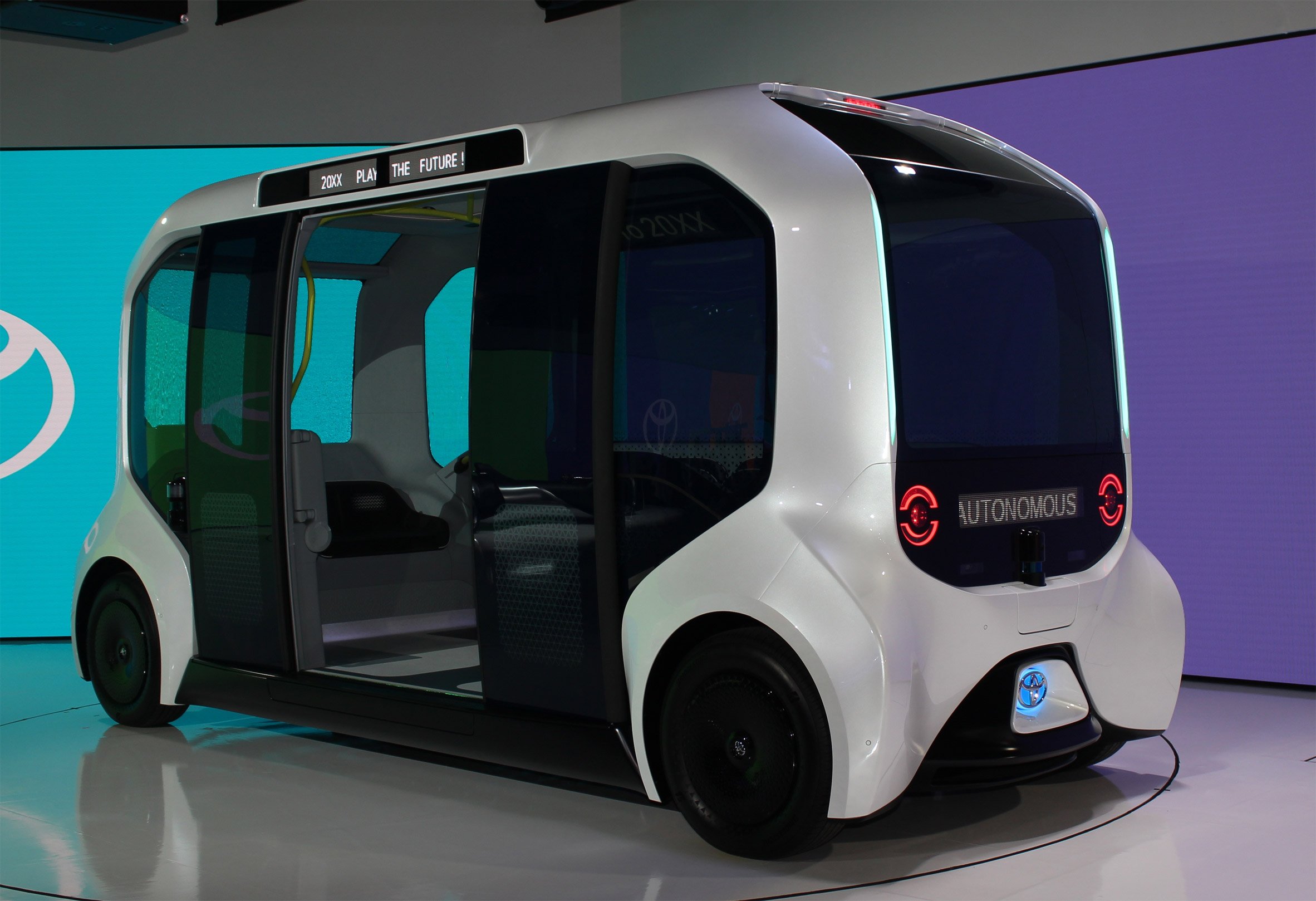 The autonomous and electric e-Palette vehicle was designed to transport Olympic and Paralympic athletes around the Olympic Village without generating emissions.

Some of the modifications include widening the doors, lowering the flor and adding electric ramps to enable passengers – particularly wheelchair users – to board easily and quickly.

Find out more about the electric e-Palette vehicle› 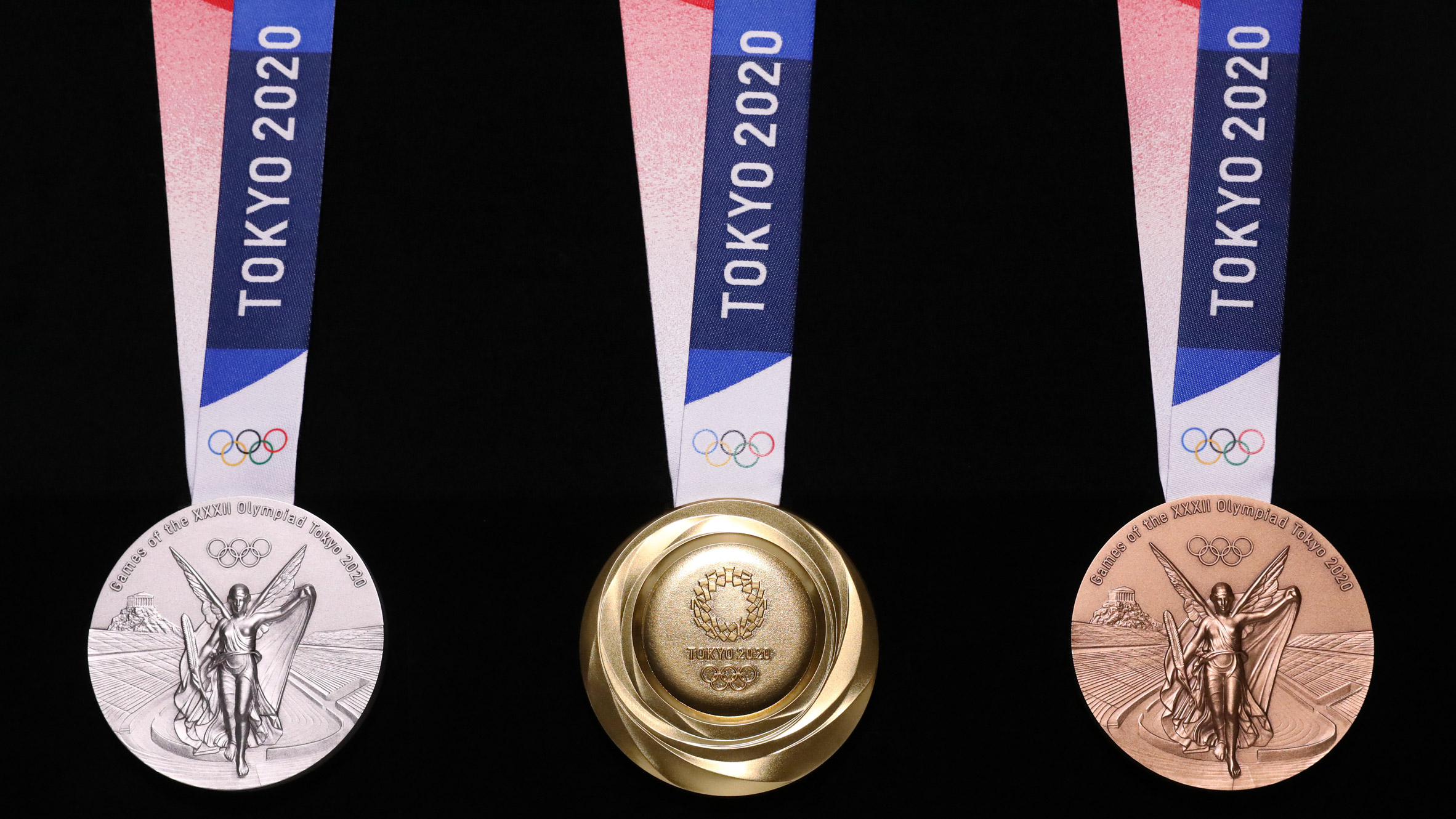 Japanese designer Junichi Kawanishi extracted precious metal from old mobile phones and other e-waste donated by the public to create reflective, ribbon-like rings around the edge of the Tokyo 2020 Olympic and Paralympic medals.

Kawanishi’s winning medal design was selected from a competition that drew entries from more than 400 professional designers and design students. The medal cases which are manufactured from dyed Japanese ash wood, have been designed by Shinya Yoshida.

Find out more about the Tokyo 2020 Olympic and Paralympic medals › 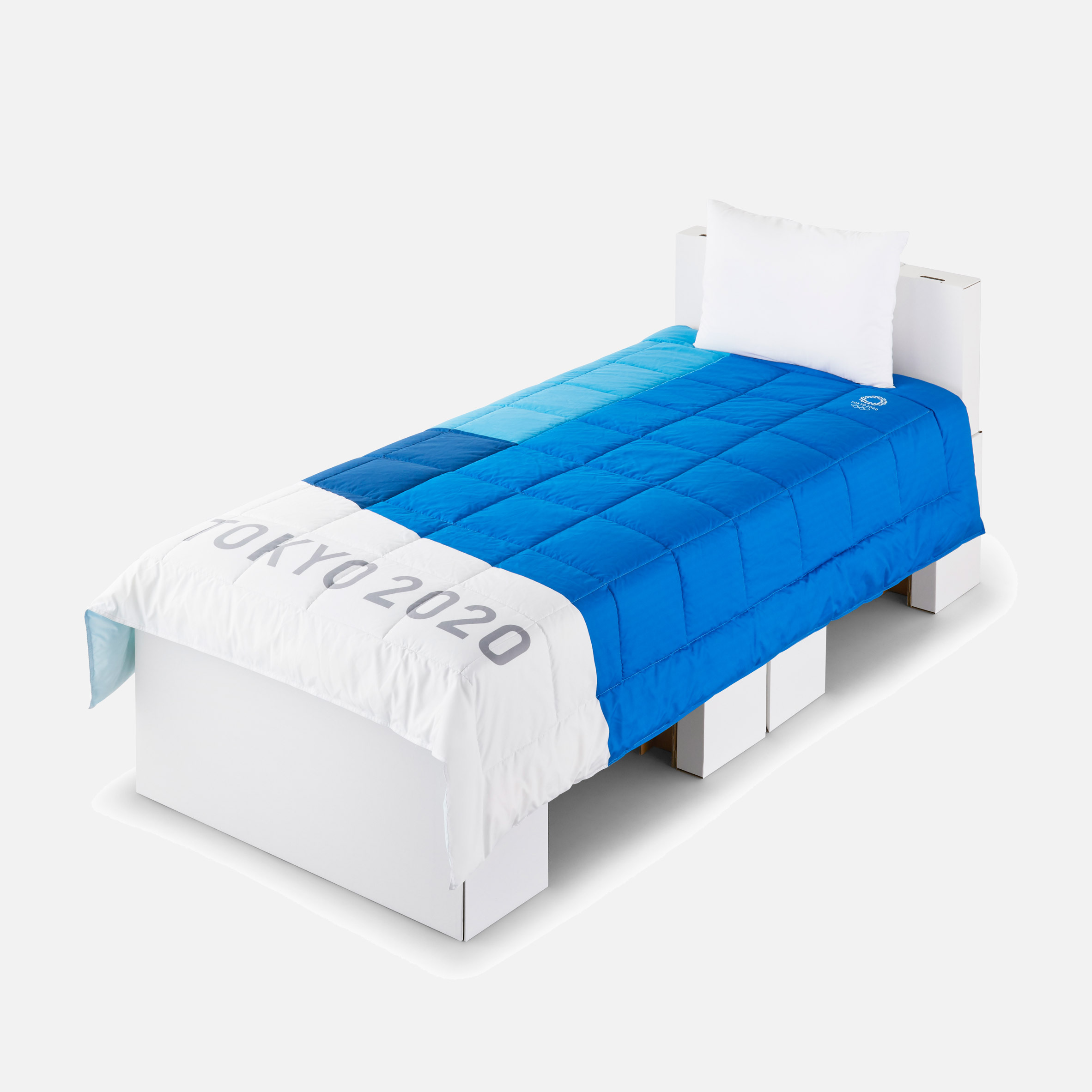 Of the 18,000 beds and customisable mattresses created for athletes at this summer’s Olympics, 8,000 will be repurposed for use by athletes at the Paralympics.

The brand claims that the mattresses, which are made from polyethylene fibres, can be recycled an unlimited number of times.

Find out more about the cardboard beds›

Japanese architect Kengo Kuma created a wooden lattice design for the Japan National Stadium, which will house the opening and closing ceremonies as well as the athletics events.

Although timber is generally considered a sustainable building material due to its ability to store carbon, the design came under fire for using wood linked to deforestation and human-rights violations.

It was found that the wood used in Kuma’s wooden, plant-filled structure could be traced back to Shin Yang, a Malaysian logging giant accused of illegal logging and rainforest destruction.

Find out more about the stadium › 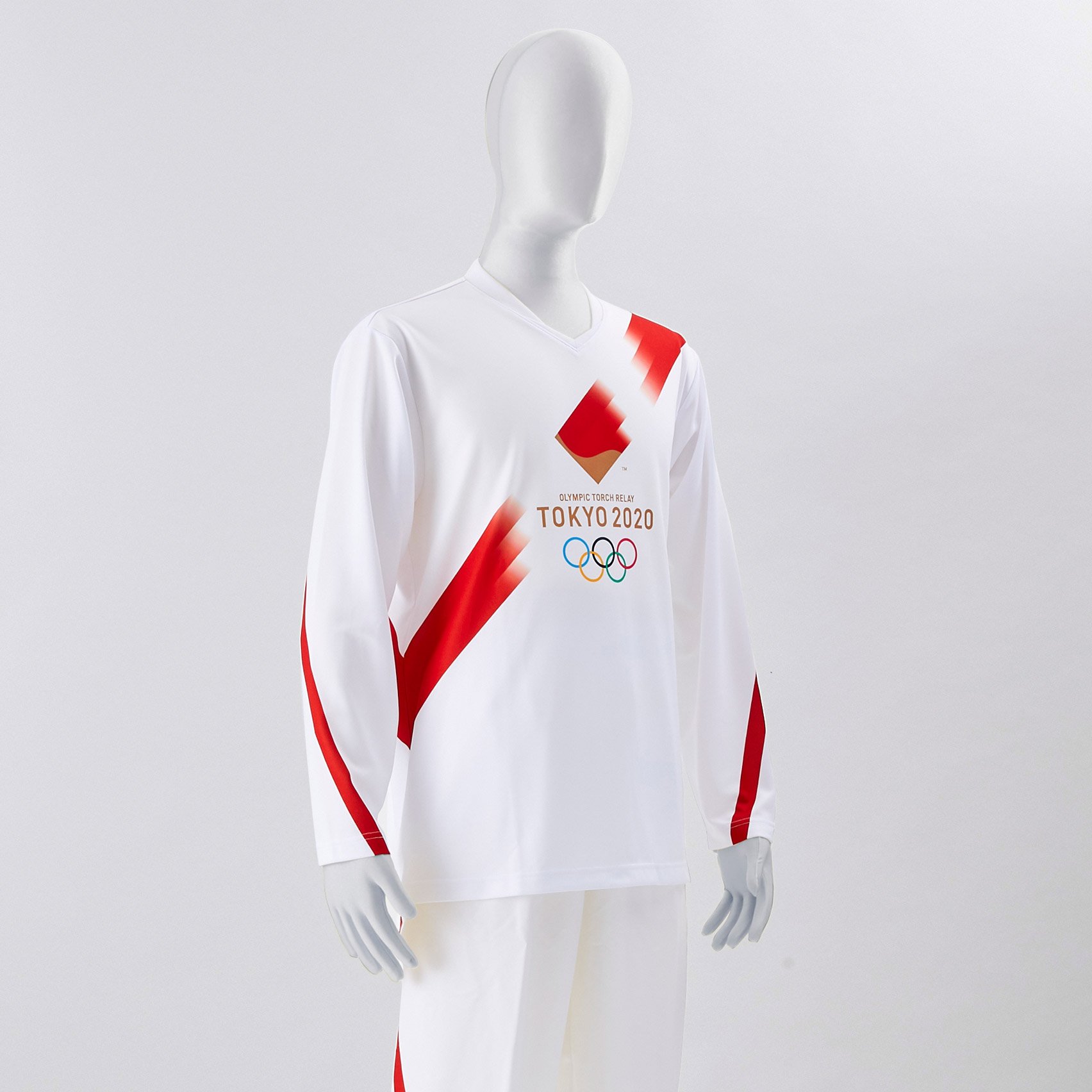 Recycled plastic bottles collected by Coca-Cola have been used in the white T-shirts and trousers worn by torchbearers carrying the Olympic flame at the Tokyo 2020 Olympic torch relay.

The designs all feature a sash with a chequered pattern that is known in Japan as ichimatsu moyo. The same pattern can be found in the Tokyo 2020 logos.

Find out more about the Torchbearer uniforms › 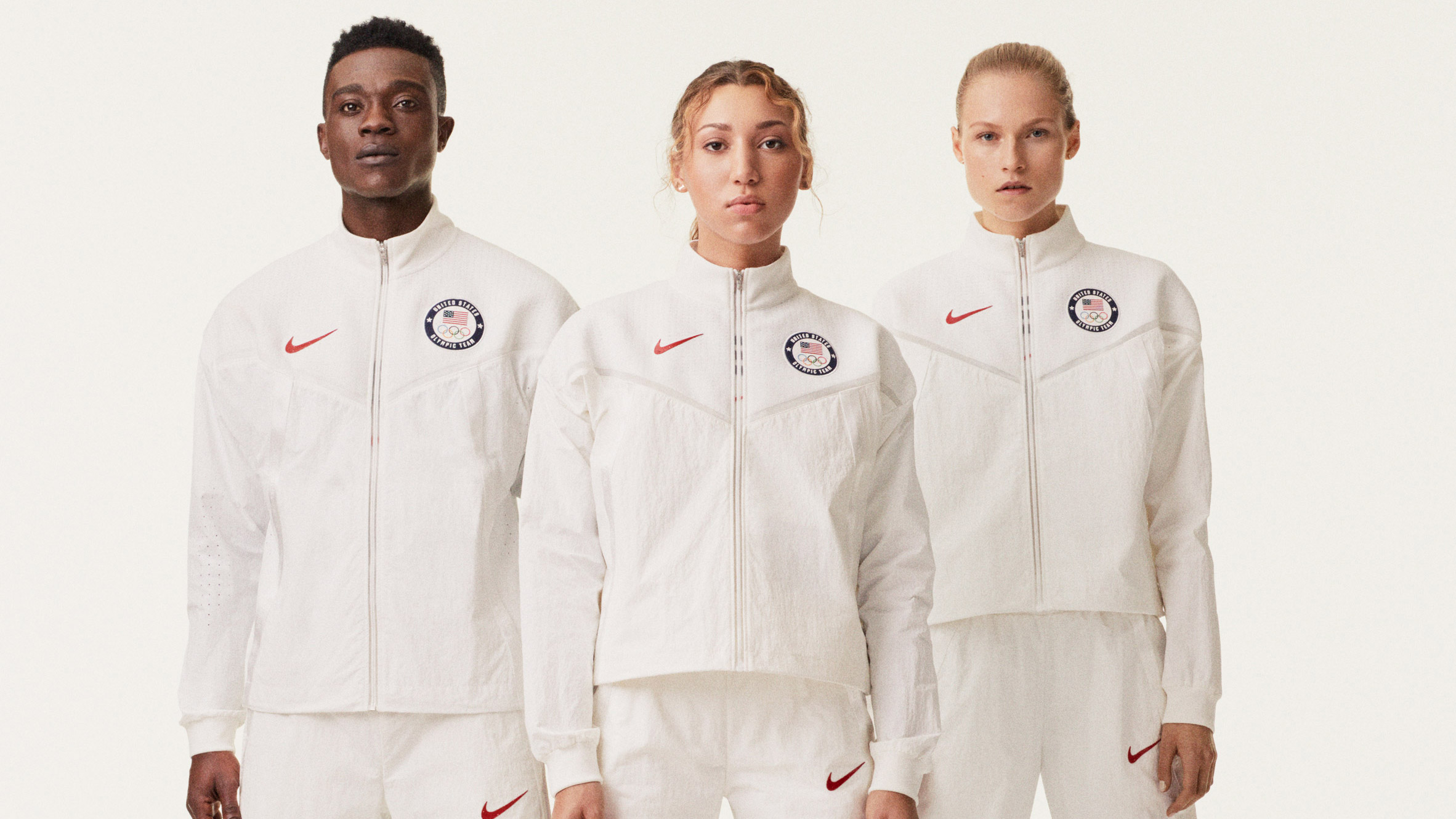 Basketball and soccer uniforms by Nike

Sportswear brand Nike used recycled polyester made from plastic bottles and recycled nylon as well as rubber and yarn waste from the company’s factories to create these uniforms.

Among them are soccer jerseys for the American, Korean and Nigerian teams, alongside kits for the USA’s men and women basketball teams.

The brand says that the uniforms will be the “most sustainable” and “highest performing” to date.

Find out more about Nike’s basketball and soccer uniforms › 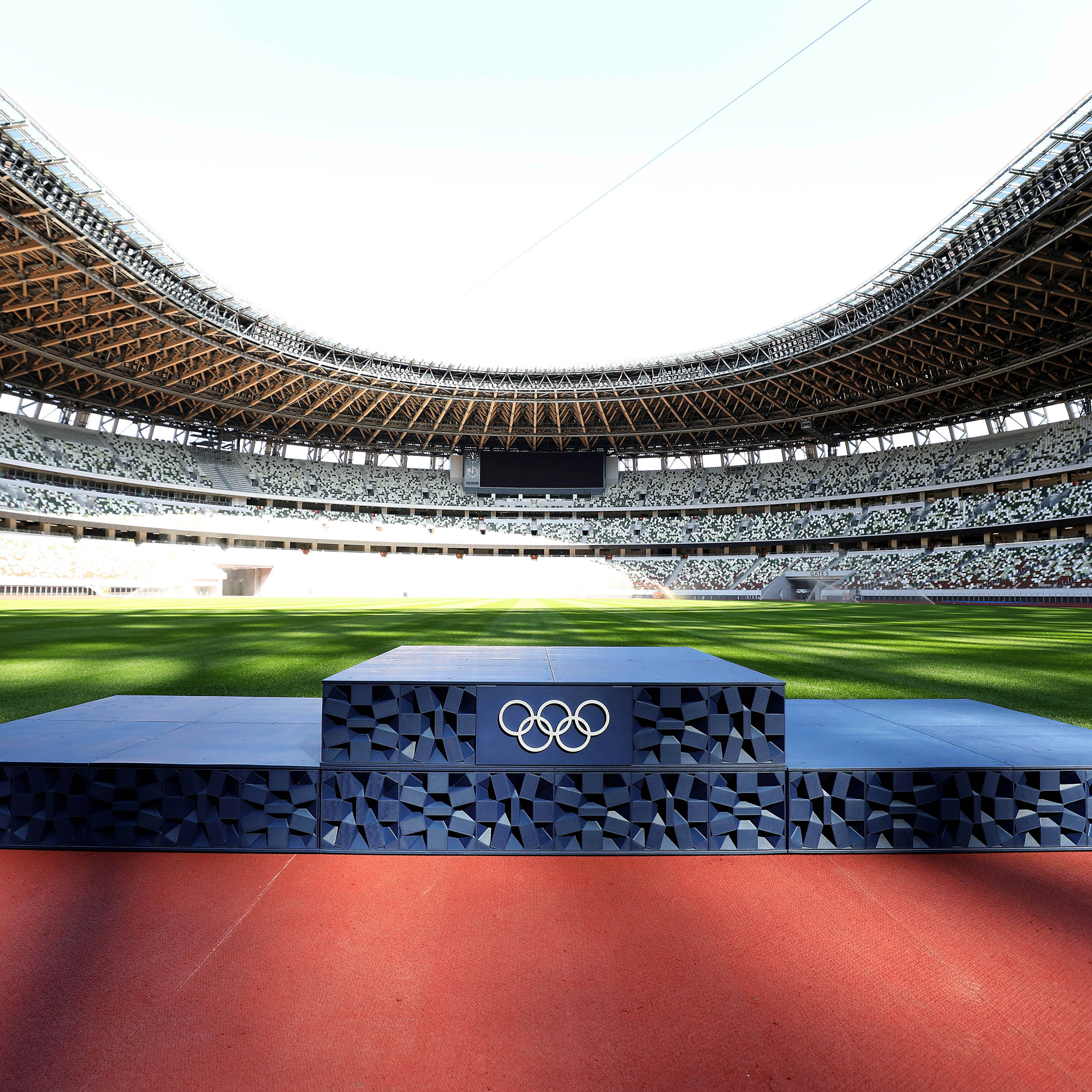 The winners at the Tokyo 2020 Olympics and Paralympics will receive their medals on podiums made from 24.5 tonnes of discarded household plastics.

Japanese artist Asao Tokolo gathered the plastics from the Japanese public before recycling the material and turning it into filaments, which were used to 3D-print the podiums.

The equivalent of 400,000 bottles of laundry detergent was collected to create all 98 podiums that will be used during the Games.

Find out more about the podium › 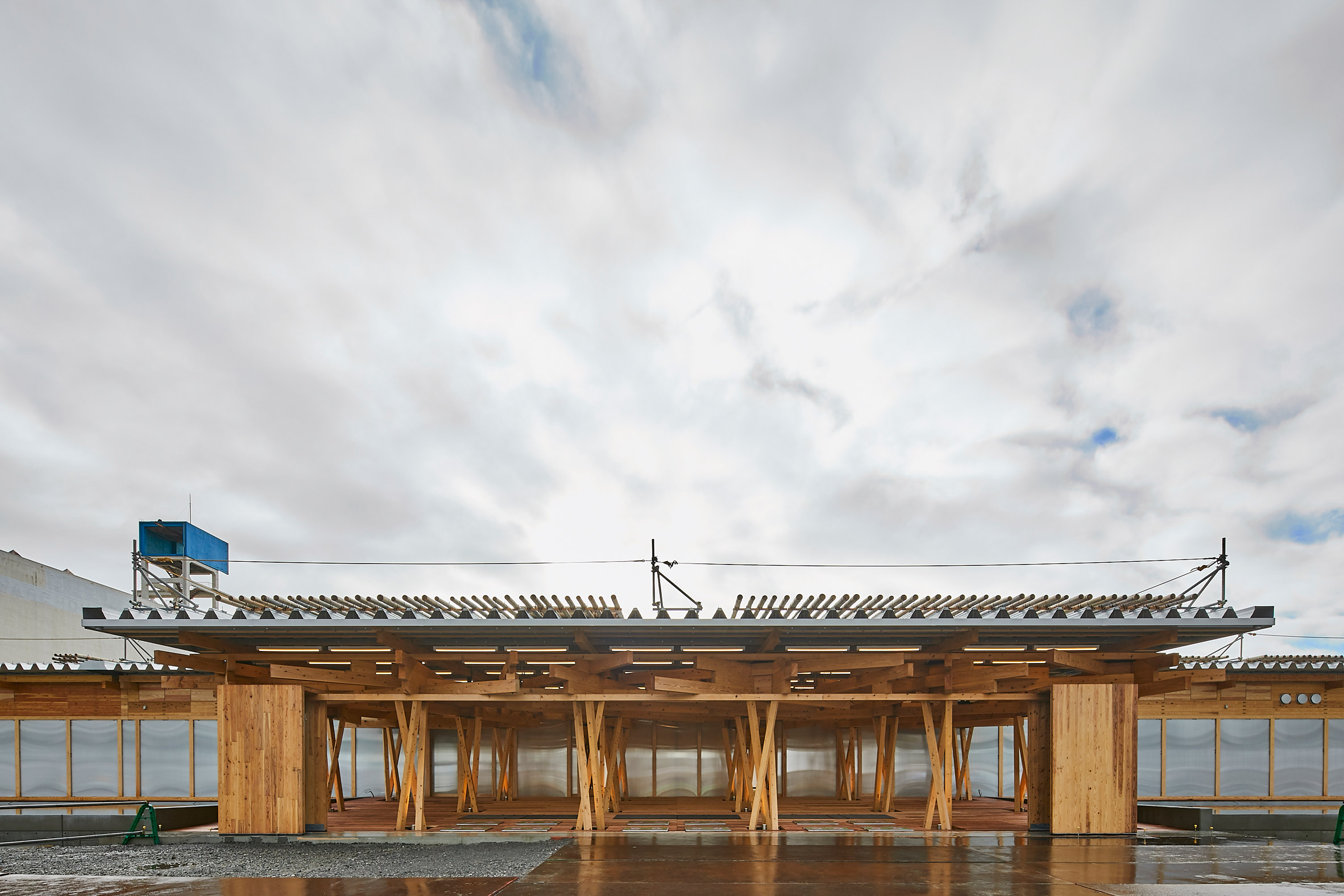 This temporary structure by Tokyo studio Nikken Sekkei was built using 40,000 pieces of Japanese wood. The pieces of cypress, cedar and larch were “borrowed” from local governments across Japan.

The timber space will be used as the central meeting and dining place for athletes, officials, guests and the media within the Olympic Village throughout the games.

Find out more about the village plaza › 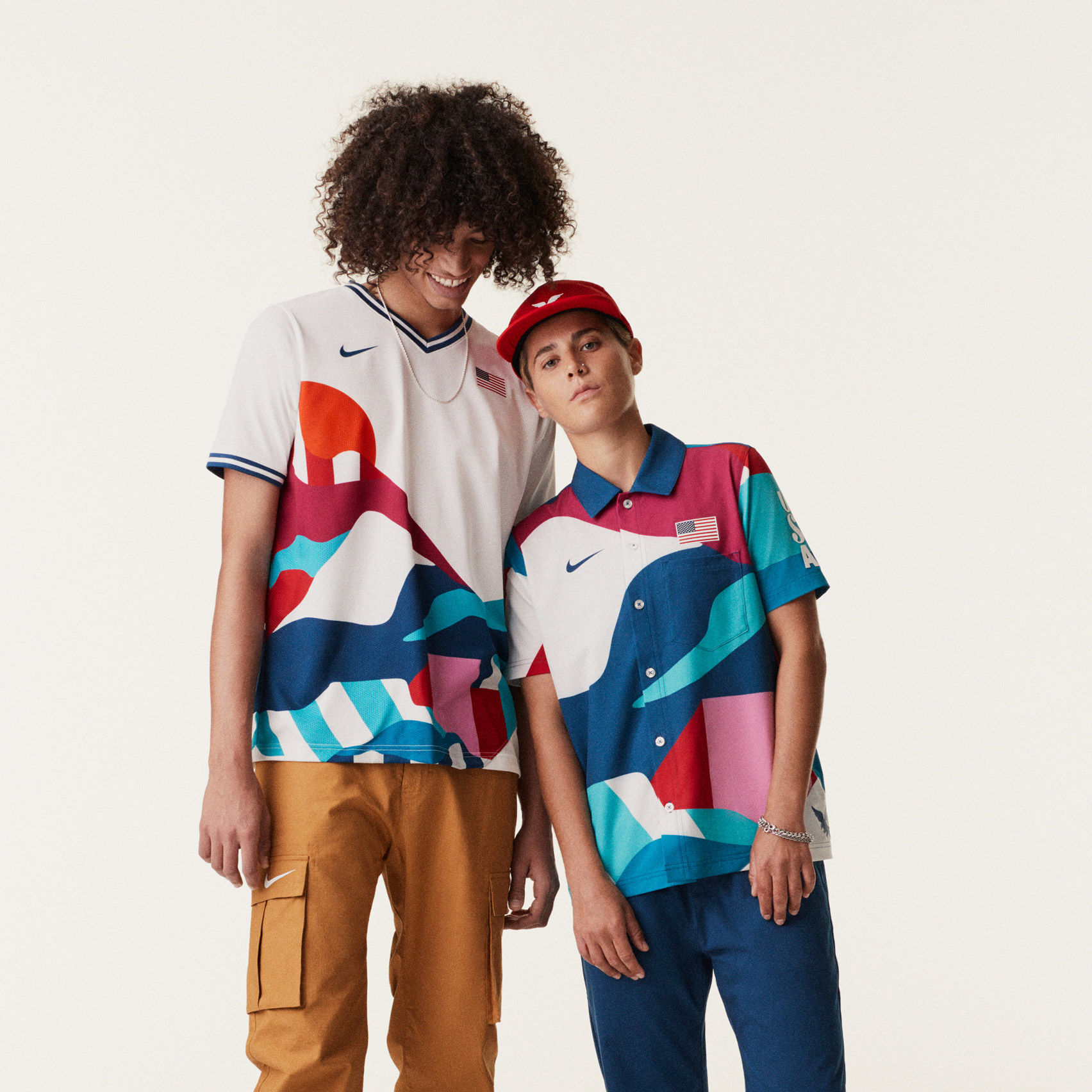 Bright colours and geometric patterns adorn the skateboarding uniforms that Nike has designed for the first skateboarding competitors at the Olympic Games.

According to Nike, all of the skateboarding jerseys are made up of 100 per cent recycled polyester from “water bottles and other things that would go to waste”.

The sportswear company has created uniforms for the United States, France and Brazil. They will all be bringing teams to the Tokyo 2020 Olympics to compete in the sport’s first street and park competitions at the Olympic level.

Find out more about the skateboarding uniforms ›