Many people are becoming increasingly dismayed and disillusioned with the impact that the pandemic is having on their personal, social and financial circumstances.

While some are looking for any opportunities that the new normal is presenting, others are taking action – they’re moving.

More and more people are making plans to move as soon as they can.

While some of them may rethink their plans when things are relatively back to normal, others will definitely relocate.

This is not something new, as people have always moved in search of better opportunities.

We have experienced such relocation trends before 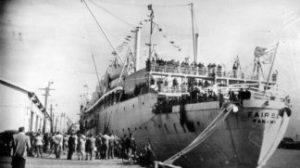 Most of us have parents or other forebears who were born overseas.

Although some people have come here to escape persecution and discrimination many arrived in the hope of finding better opportunities for themselves and their children.

In fact, before our borders were closed, over sixty percent of our new residents regularly came from other countries.

But while our relocations are not novel, what is currently driving people to make such moves certainly is, and this is setting in train a new wave of moves which are likely to grow in number as the economic downturn worsens next year.

Perhaps the closest parallel we can find to this situation is what took place during the Great Depression, when our population trends underwent two massive changes.

The drift to regional and rural areas was driven by massive changes in the economy and social order which the Great Depression created.

Unemployment numbers rapidly rose during the early 1930’s but even those with jobs had their wages cut.

Many lost their homes and found it impossible to make ends meet.

It was also a time of social unrest, especially in the big cities where right and left extremists held protest rallies and urged people to reject a system which had failed them.

Australia’s rural areas offered people an opportunity to escape from the turmoil. Single men took to the road, becoming swaggies who tramped from town to town seeking whatever work was available.

Needy families found cheap food and accommodation in country towns, growing their own food and making do with whatever nature could provide. 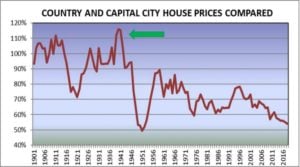 The graph shows that this trend was dramatically reversed during the Great Depression, when city house prices fell more in value than country ones, some of which actually rose.

By 1940, (green arrow) the price of an average country house was fifteen per cent more than that of a similar city house, something which has never occurred before or since.

Could this happen again? All it would need is the same two coinciding population trends, which are a massive reduction in overseas arrivals and a significant shift away from city living to regional and rural areas. We are now witnessing the emergence of both of these trends. 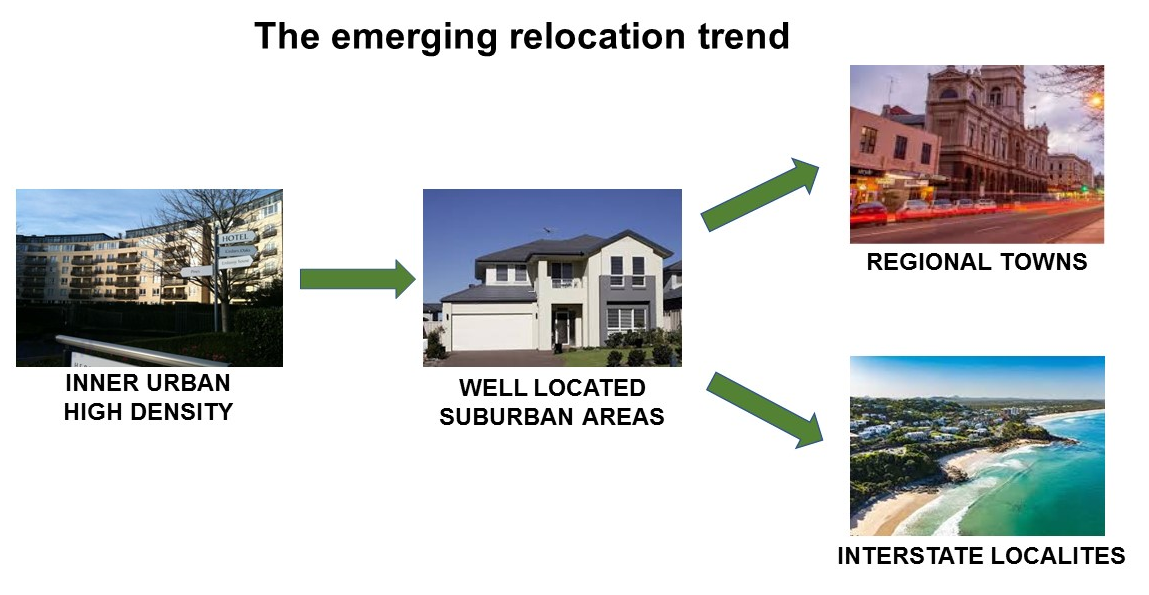 This is the emergence of a new relocation trend

Not only have the numbers of overseas tourist, student and migrant arrivals collapsed, leaving our inner urban rental markets in a state of disarray, but many existing residents are deserting them because they were never designed to cope with the new social distancing requirements and the attractions of urban living have dissipated.

Some inner urban locations could even be in danger of becoming virtual tomb towns. 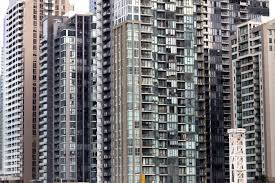 Not only has their attractiveness for future tourists, students and recent arrivals diminished, but the numbers of such new arrivals are likely to be far lower in the foreseeable future.

This trend will continue and strengthen as the economic impact of the pandemic develops over coming months.

Such a dramatic shift in housing demand could even lead to housing booms in locations less unaffected by the pandemic and its social and economic fallout, where people will hope to discover opportunities for exercise, entertainment, employment and a better lifestyle, free from the threat of restrictions on movement, assembly and travel.

While the causes of our current situation are very different from those that led to the Great Depression, the social effects could turn out to be very similar.

In coming months and years, we may witness a complete reversal of the trend to live in densely populated urban areas.

As increasing numbers of people discover the benefits and attractions of living in clean, green regional areas and in States that have been less impacted by the pandemic we are likely to see housing prices in the most sought after regional and rural areas rising strongly in comparison to those of the big cities, at least for the next few years.