A digital tool that allows anyone to design complex 3D-knitted fabrics has been named product of the year at Dutch Design Awards 2021.

Described by judges as “a real gamechanger”, Byborre Create is a user-friendly platform that offers free access to pioneering textile technology.

The platform was created by Byborre – a Dutch textile label that has previously developed fabrics for Adidas, Rapha and BMW – to bring more transparency to textile production and reduce the amount of waste in the industry.

It was one of eight winners of this year’s Dutch Design Awards, a programme that honours the best designs to come out of the Netherlands each year, announced during Dutch Design Week.

“Byborre Create makes clear that an intrinsic problem in textile production can be solved,” said judges, “while at the same time paving the way for greater innovation.”

Byborre Create is programmed to understand the capabilities of circular knitting machines, so users can accurately define the process of creating colours, patterns and textures.

It makes it possible to develop fabrics with different properties, from UV protection to odour resistance, and to apply customisation.

“I’ve developed textiles for over 15 years but I never know how colour will come out of the machine until I see it, because you cannot process the blending of six different colours in your head,” he told Dezeen.

“Byborre Create lets you know what is going to come out.” 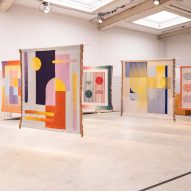 Byborre Create is linked to a library of material suppliers and textile manufacturers, so designers can find the right partners to responsibly produce their designs.

Currently users have to be approved by Byborre, although the long-term aim is to open up access to anyone who wants to use the technology.

Akkersdijk said his aim is to “democratise responsible textile development”.

“We want to see less and less materials used in the wrong way or on the wrong machines,” he said, “to open up the gates to transparency in the industry.”

Transparency in the supply chain

Byborre has taken this “open-source mindset” even further with the launch of its latest initiative, the Window of Textile Opportunities (WoTO).

The WoTO showroom in Amsterdam represents a global network of suppliers, manufacturers, institutions and organisations who are working with Byborre to revolutionise the way that textiles are produced.

It can also host exhibitions and talks about the work of its partners, who include The Woolmark Company, Parley for the Oceans, Parsons School of Design and the London College of Fashion.

Akkersdijk sees WoTO as the first step in reducing the environmental impact of the textile industry. The fashion industry alone contributes around 10 per cent of global carbon emissions.

“If there is transparency in the industry, you can start talking about what the process means to the planet,” said Akkersdijk.

“But that can only happen if all creators have access to these resources.”

Akkersdijk founded Byborre in 2015 with business partner Arnoud Haverlag, who is the company’s CEO. By then he had already developed a reputation as a disruptor through working with brands like Nike, Moncler and Louis Vuitton.

A self-confessed textile-obsessive, Akkersdijk had found a way to create 3D-knitted fabrics that were unlike anything else on the market. Although these textiles were initially limited to sportswear, it wasn’t long before they also started to attract attention from luxury fashion labels and furniture brands.

“We created a ByBorre identity, but I never really believed that,” Akkersdijk said. “I always said, well, denim is not a Levi’s identity, it’s a material.”

This is the reason why Byborre is now revealing the materials and processes behind its fabrics. Akkersdijk said his end goal is to create an ecosystem where the supply chain of every textile product becomes an important consideration for both designer and consumer.

“We truly believe that the creators are the gatekeepers of doing better,” said Akkersdijk.

“They have the ability to ask questions, like where does the yarn come from, and how do we communicate that to the consumer? That’s what we’re focusing on.”